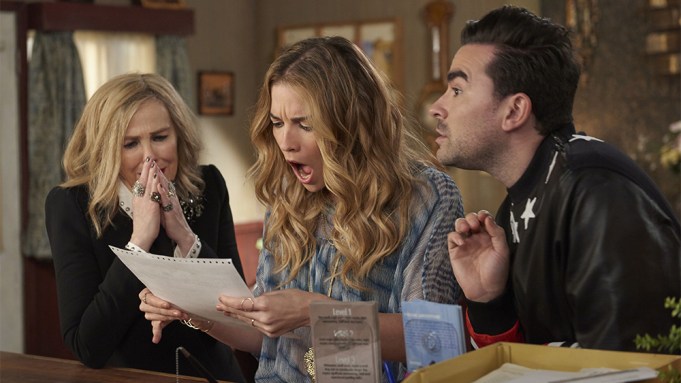 All seasons of the half-hour comedy, which is set to air its sixth and final outing on Pop and the Canadian Broadcasting Corporation in Jan. 2020, will begin airing in U.S. broadcast markets starting in fall 2020. The deal was announced by Lionsgate’s Debmar-Mercury, who previously bought the domestic broadcast rights to the series from international distributor ITV Studios Global Entertainment.

The two-year deal with Fox comes off the back of four Emmy nominations for the series created by Eugene Levy and Daniel Levy.

“’Schitt’s Creek’ will enter syndication on Fox and other television stations throughout the country next fall with one of the most loyal and passionate fan bases on television,” commented Debmar-Mercury co-presidents Ira Bernstein and Mort Marcus. “It is so rare to have a show like this that appeals equally to viewers, Emmy voters and critics – a testament to its extraordinary gifted cast and writing. We are excited to be working alongside ITVS GE to bring this outstanding program to the world.”

The series centers around a wealthy family who suddenly find themselves broke and forced to live in Schitt’s Creek, a small town they once bought as a joke. It stars Eugene Levy, Catherine O’Hara, Daniel Levy, Annie Murphy, and Chris Elliott, among others.