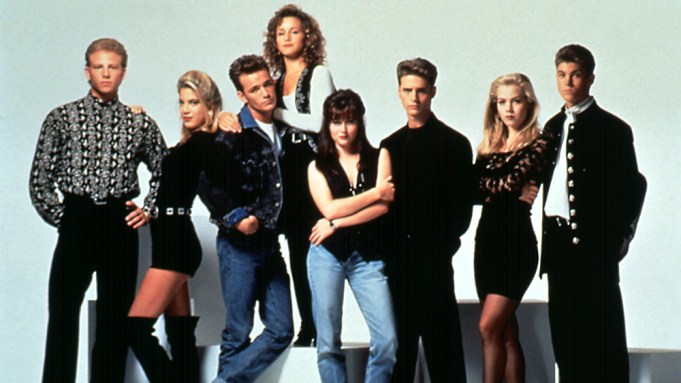 “Beverly Hills, 90210” star Luke Perry died on Monday at the age of 52, after suffering a stroke last week.

Since the news of his death was announced, several of his “90210” co-stars have posted condolences and shared memories of their time working with Perry.

Ian Ziering, who played the brash, light-hearted Steve Sanders opposite Perry’s more reserved Dylan Mckay, said on Twitter that he will “forever bask in the loving memories” he and Perry shared together.

Dearest Luke,
I will forever bask in the loving memories we've shared over the last thirty years. May your journey forward be enriched by the magnificent souls who have passed before you, just like you have done here, for those you leave behind.

Current SAG-AFTRA President Gabrielle Carteris, who starred in “90210” as the intelligent, socially awkward Andrea Zuckerman, released a statement which described Perry as a “tremendous force” and a “sensitive soul.”

“I am absolutely heartbroken. Luke was a tremendous force in the lives of so many. He was a very sensitive soul who was kind, generous and he fought for the underdog. He was a strong voice and an advocate who will be so missed by all who knew him. He has left his mark – never to be forgotten. My heart goes out to his family, friends and fans around the globe,” Carteris said.

Emma Caulfield Ford, who played local college paper editor and self-proclaimed feminist Susan Keats on the show, remembered being struck by Perry’s camaraderie and sense of humor from the very first time she set foot on the “90210” set.

My first day on 90210 Luke brought me under his wings & made me feel welcome. His first words to me were “so how are the bitches treating you ?” It made me laugh & I felt like I had an ally in my corner. You set a tone and made sure I could thrive. It was my first real gig and..

2/2 and your kindness was rarely matched. God bless you Luke. You’re with the rest of the angels. #RIPLukePerry you will be missed.

One last thing about Luke, in a time where the #metoo movement has cast a deserved light on the bad men who have mistreated women in Hollywood and elsewhere, let it be remembered that Luke was a real man- kind, supportive, open hearted vulnerable, strong, and fair. #RIPLukePerry

Kathleen Robertson, who played Clare Arnold, the smart, wild daughter of of the local university’s chancellor and a wealthy diplomat, said that her “heart breaks” at the news of Perry’s death.

As a young girl from Hamilton Ontario coming onto the biggest show in the world mid stream, Luke welcomed me from day one. My heart breaks. ❤️ #lukeperry #90210 pic.twitter.com/8QA4SEipqB

Finally Christine Elise McCarthy, who joined “90210” in season two as Emily Valentine, a troubled newcomer to East Beverly who spent time in a mental hospital, said she was “stunned and devastated” when she hard of Perry’s death.

With the heaviest of hearts, I am stunned and devastated to tell you that Luke passed away. I am still in shock and I have no words beyond saying he was a truly kind gentleman. He will be mourned and missed by everyone who knew him and the millions who love him. RIP, dearie Luke. Your time here was far too short. 💔💔💔