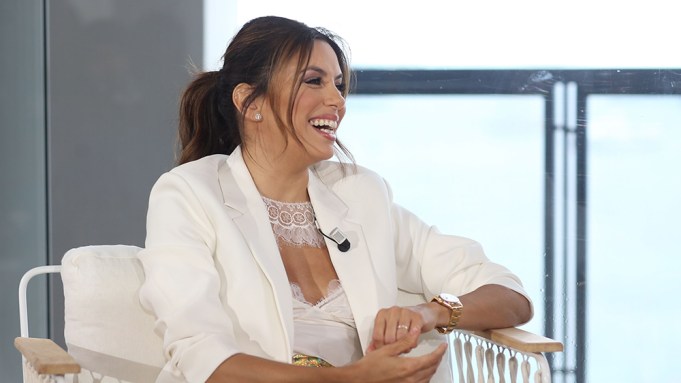 Eva Longoria said Thursday in Cannes that Time’s Up, the progressive movement pushing for gender equality in the workplace that she co-founded, is looking for ways to be more politically active in the 2020 polls. “We’re trying to figure out what is Time’s Up’s role in these elections, and how can we have an impact,” she said at a Kering Women in Motion talk at the Majestic Hotel.

Longoria said that the group’s efforts ahead of next year’s elections need to focus not only on the presidential contest, but on down-ballot votes at state and local levels, the consequences of which can be even more far-reaching. “We see what’s happening in Alabama right now, which is crazy, archaic, not progressive, not American,” she said, referring to that state’s recent passage of an anti-abortion law. “That’s a state legislature.”

Last year, Longoria executive produced the Netflix documentary “Reversing Roe,” which examined the widening efforts to overturn the landmark Supreme Court decision that legalized abortion. One measure she suggested Time’s Up can take to push for policy change is to publish report cards on legislators, grading their performance on progressive initiatives.

She pointed to the legislation in Alabama and other states as part of a wider “domino effect” of intolerance that’s sweeping across the globe. “What’s happening in Alabama is so important in the world,” she said. “It’s going to affect everybody if we don’t pay attention.”

For years, the “Desperate Housewives” star has been an outspoken advocate on issues ranging from women’s rights to greater representation for the Latino community. Those efforts, she said, took on greater importance after the birth of her son last year. “My activism and charitable work has a sense of urgency now,” she said. “Now that I have a son, I’m like, ‘Oh my God, we have to fix the world!’”

Despite the wave of public conversation around gender parity and diversity in the entertainment industry, Longoria said much work remains to be done to achieve the goal set by Time’s Up to achieve 50-50 workplace equality in Hollywood by 2020. “The statistics are going the wrong way,” she said. “We’re not improving.”

Longoria spoke about her own efforts as a producer, such as on the upcoming ABC series “Grand Hotel,” to push for workplace equality. “I think it’s important once the door is open and you’re there, to leave the door open for other women,” she said. “We have to start building this pipeline of talent. If they don’t get the opportunity, then how are they ever going to be ready?”

Despite the challenges, Longoria said she’s seen an upside to recent public discourse in Hollywood. “The great thing that has happened out of the Me Too movement and Time’s Up is that women are talking to each other,” she said. “We have now this wonderful sisterhood and community of information.”

That community, she said, will ultimately be the driver of change. While stressing the importance of educating male gatekeepers about the vast pool of untapped talent that women represent, Longoria suggested that was just the first step. “We need to not only educate the gatekeepers that there’s a pool of talent we’re not tapping into, which are women, but to change those gatekeepers.”