Emmys: Britain’s Got Talent, and the U.S. Has Got Money 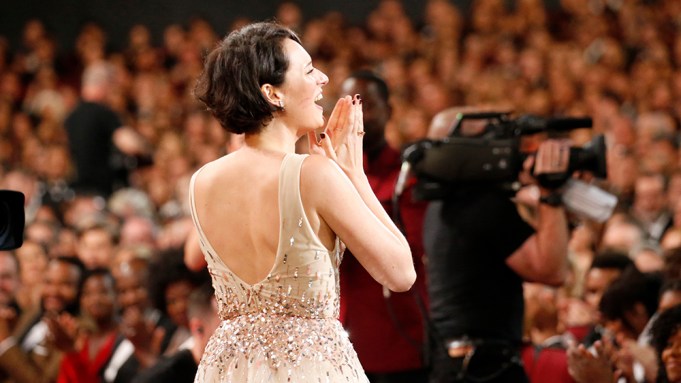 Brits registered a huge night at the Emmys, with involvement in 13 of the 27 awards given out Sunday night. But scratch the surface, and the strong trans-Atlantic links for the U.K. successes become clear. Yes, Britain’s got talent, but the U.S. has the cash to help bankroll it.

Take big winner “Fleabag,” which scooped four awards, including two for creator Phoebe Waller-Bridge, who took home acting and writing trophies. The show was originally piloted by digital channel BBC Three, which commissioned a series, whereupon Amazon got involved. “It’s full of characters and locations and not the kind of show you can make for a cheaper budget, so having Amazon on board financially, and with the platform they have given it internationally, has been brilliant,” exec producer Jack Williams told Variety.

“It makes sense for both countries,” added Williams, who is managing director of Two Brothers Pictures, which makes “Fleabag.” “We share so much talent; we speak the same language. You look at ‘Chernobyl’ and ‘Fleabag’ and say, ‘Why wouldn’t you try and make that work when you can and you don’t have to force it?’ You can make a show that works in both territories in a way you are both happy with. It’s definitely the way forward.”

The co-production model is increasingly in vogue in an era of big-bucks drama. “Chernobyl,” whose Emmy haul hit double digits, is the latest show to emerge from a partnership between London-based Sky and HBO. Sky basked in further Emmy success as the U.K. home of HBO and Showtime shows, making it the broadcaster of such award-winners as “Barry” and “Succession,” for which a Brit, Jesse Armstrong, won the best-writer, drama, prize.

“We’re delighted to see so many of the shows we have co-produced and broadcast collect these iconic awards,” said Zai Bennett, Sky’s managing director of content. The pay-TV giant, which is now owned by U.S. cabler Comcast, has set out its production ambitions through Sky Studios.

It was the independent producers that fared well in Britain’s awards haul Sunday, rather than the in-house drama divisions of the major broadcasters. But they, too, have U.S. links.

What could be more homegrown than “A Very English Scandal,” for which Ben Whishaw nabbed the Emmy for best supporting actor in a limited series? The BBC show, about a British political scandal in the 1960s, was made by London-based Blueprint Pictures. But the company is backed by Sony, which sells the series globally. Similarly, “Fleabag” producer Two Brothers is backed by All3Media, which is in turn owned by Liberty Global and the U.S. giant Discovery.

“Whether it’s the U.S. SVODs, traditional channels or pay TV, they want the best creativity and talent, and the U.K. is the first place they look outside their own market,” John McVay, head of the influential British indie trade body Pact, told Variety. “That’s great. I would rather see it going to our creativity than someone in France, Spain or Germany. There isn’t any downside.”

“Killing Eve” producer Sid Gentle Films is the outlier, counting the U.K.’s BBC Studios as its major backer. But the show, which won Jodie Comer an Emmy for best actress in a drama, was commissioned by BBC America – a fact largely unbeknownst to British viewers.

The biggest winner Sunday night, HBO’s “Game of Thrones,” has a Brit-heavy cast and has provided gainful employment for scores of other U.K. talents in front of and behind the camera, as well as a shot in the arm for the economy of Northern Ireland, where it was shot in part.

Unlike “Game of Thrones,” British shows typically have short runs and a modest number of seasons. For “Fleabag” fans, that likely means no third season – for a decade, anyway. “I suspect that’s it. I’ll ask Phoebe in 15 minutes when I speak to her,” Williams said from London, before getting on the phone with Waller-Bridge in L.A. “Maybe in 10 years’ time, but I think she feels it’s done and is going to be doing other things for quite a while….But what a way to end.”

Many had expected Julia Louis-Dreyfus to win the comedy actress award for the final season of “Veep.” “That’s what we all thought, including Phoebe,” Williams said.

Already writing on the new Bond film, Waller-Bridge went from hot to red-hot overnight. “It’s so wonderful and reassuring to know that a dirty, pervy, angry and messed-up woman can make it to the Emmys,” she said as she accepted her gong.