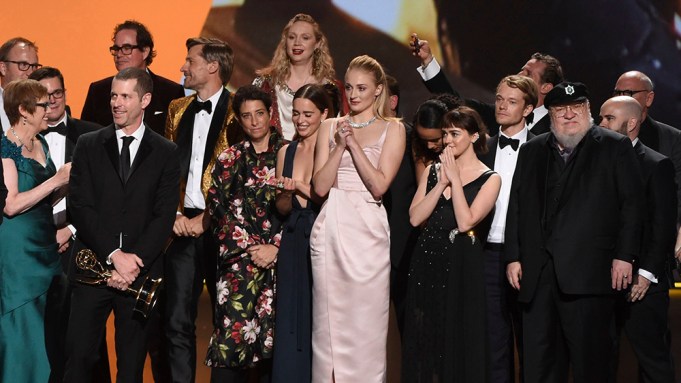 Sunday night’s hostless Emmys on Fox were likely hoping to emulate the Oscars ratings success in cutting out an emcee.

However, according to Nielsen figures, the 2019 Emmys have gone the way of seemingly all awards shows and plummeted to an all-time low.

Fox’s broadcast averaged a 1.6 rating in the key 18-49 demographic and was watched by a total of 6.9 million viewers, a historic low for the awards show in both metrics. That also represents a 33% rating decline on last year’s Monday night show on NBC and roughly the same on the 2017 ceremony which also aired on a Sunday night on CBS. For comparison, the previous four ceremonies were watched by 10.2 million viewers, 11.4 million viewers (in both 2017 and 2016) and 11.9 million viewers. 6.9 million total viewers is roughly one third of the total pairs of eyeballs the Emmys drew as recently as 2013.

Some of the big winners on Sunday night included “Game of Thrones,” which carried home the final award of the night for best Drama Series, and “Fleabag,” which nearly swept all of the comedy categories on its way to a surprisingly stellar night.

The show was up against formidable competition in “Sunday Night Football” on NBC. The Peacock aired a highly anticipated match up between the Los Angeles Rams and the Cleveland Browns, likely contributing in some part to the poor Emmy figures. The Rams-Browns matchup topped the night in metered-market households with a 12.8 rating and a 23 share.