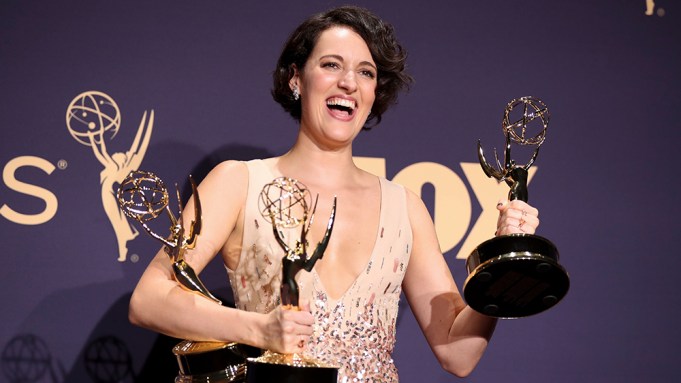 The 71st Primetime Emmy Awards offered up several pleasant surprises — wins for Phoebe Waller-Bridge and Billy Porter, to name two — as well as a few less well-received moments. Here are the top five takeaways from the night.

A Long, Host-Free Affair
Fox followed in the Oscars’ footsteps and opted for a host-less Emmys this year. However, while the film awards show saw a spectacular bump of almost 30% in the ratings after ditching an emcee, there was no such luck for Fox on Sunday night.

Instead, the ceremony opened with a piano falling on Homer Simpson — a fitting image as the ratings also came crashing down. The show slipped to an all-time low of 6.9 million total viewers and a less-than-stellar 1.6 rating among adults 18-49, according to Nielsen. The Oscars achieved a tighter show by cutting out superfluous host bits, whereas the Emmys somehow seemed to drag on forever.

Viewers and critics were left scratching their heads over the way Fox filled the time saved. There was an over-the-top song-and-dance performance by Adam Devine featuring characters from Fox shows, and a brief video segment bidding farewell to some of the programs that finished their runs this past season (including a self-serving nod to the network’s “Gotham” but excluding arguably more deserving shows such as The CW’s “Crazy Ex-Girlfriend”). All in all, Fox’s strategy failed to strike the right chord more often than it succeeded.

A Very English Emmys
Great Britain may be suffering through a time of great political instability, but on the television front, things are right as rain.

Brits cleaned up at the Emmys on Sunday, winning many of the night’s biggest awards, including both top actress gongs, which went to Phoebe Waller-Bridge for “Fleabag” and Jodie Comer for “Killing Eve.”

It was a historic night for Waller-Bridge’s Amazon show, which upset a pair of established American Emmy juggernauts in “Veep” and “The Marvelous Mrs. Maisel” on the way to four primetime wins. Comer gave a shout-out to her family watching back in Liverpool during her acceptance speech, revealing, in typically British self-deprecating fashion, that she didn’t invite them because she never expected to best her co-star Sandra Oh for the golden statuette.

John Oliver continued his dominance in the variety talk series category, in perhaps the least surprising news of a British triumph. The sight of Brits clutching Emmys was so ubiquitous by the end of the night that “Succession” creator Jesse Armstrong, himself English, commented on it during his writing-for-a-drama-series speech. “There’s quite a lot of British winners, maybe too many,” Armstrong said. Clearly there’s no such thing, as far as the Television Academy is concerned, and with the return of “The Crown” and “Killing Eve” in the coming months, British actors could well rule the Emmys once again in 2020.

The Revolution Will Not Be Broadcast
It was a rough night for the Big Four broadcast networks, with ABC, CBS, Fox and NBC collectively winning a mere 16 Emmys, a historic low and down from last year’s 22 wins. Prior to that, the broadcasters’ worst year was 2016, with 19 combined awards.

Meanwhile, HBO had a good night, taking home 34 Emmys, more than twice as many as all the broadcast networks combined. Netflix and Amazon rounded out the top three networks by wins, bringing back to their mantels 27 and 15 awards, respectively, thanks in part to Netflix shows “Love, Death & Robots,” “Queer Eye” and “Russian Doll” and Amazon series “Fleabag” and “The Marvelous Mrs. Maisel.”

NBC took a place among the top five networks, albeit with just seven awards, five of which went to “Saturday Night Live,” while CBS and Fox each earned four. ABC lagged behind with a single Emmy for “Live in Front of a Studio Audience: Norman Lear’s ‘All in the Family’ and ‘The Jeffersons.’”

Power to the People
Many of the evening’s winners felt empowered to speak up and speak out, advocating for trans rights, pay equity and other forms of representation and inclusion.

Jharrel Jerome, who won for his role as one of the Exonerated Five in “When They See Us,” thanked the five men in his speech; Michelle Williams advocated for equal pay while accepting the lead actress statuette for her role in “Fosse/Verdon”; Patricia Arquette used her time onstage to push back against the persecution of trans people and pay tribute to her late sister, transgender actress Alexis Arquette.

“They’re human beings; let’s get rid of this bias we have everywhere,” said Arquette while accepting her supporting actress Emmy for her performance in “The Act.”

And in making history as the first openly gay black man to win a lead actor Emmy, “Pose” star Billy Porter, quoting novelist and playwright James Baldwin, told the audience, “It took many years of vomiting up all the filth I’d been taught about myself, and half-believed, before I was able to walk on this Earth as though I had a right to be here,” then added, “I have the right. You have the right. We all have the right.”

A Not-So-Fond Farewell
“Game of Thrones” and “Veep” — two shows that have dominated the Primetime Emmys for years — had their final bows at this year’s ceremony. Yet neither got the expected sendoff. “Veep” was completely shut out of all the major comedy categories, with series star Julia Louis-Dreyfus losing out in the actress category to “Fleabag” star Phoebe Waller-Bridge and the Amazon show taking home the prize for comedy series.

“Thrones” scored just two awards Sunday night — supporting actor in a drama for Peter Dinklage and drama series. The show netted a record 32 nominations for its final season but took home 12 in all, tying its own record for most wins by a program in a single year. “Thrones” was still the winningest show of the 2019 Emmys, followed by HBO’s “Chernobyl,” with 10.