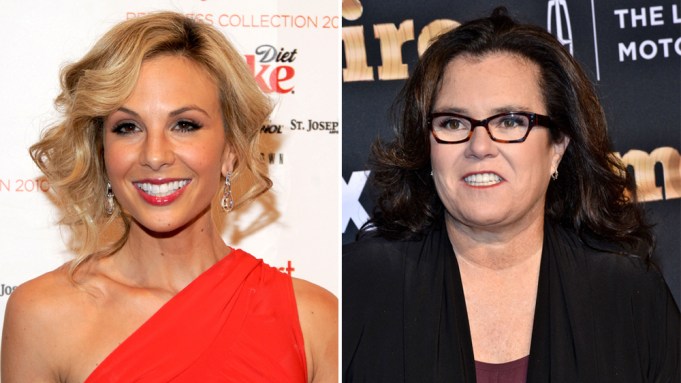 Elisabeth Hasselbeck, who returned to “The View” on Tuesday to promote her new book, criticized her former co-host Rosie O’ Donnell for recent comments in which she claimed that the two had a mutual crush on each other during their time on the daytime series.

O’Donnell’s comments appeared in the upcoming “Ladies Who Punch: The Explosive Inside Story of ‘The View’” by Variety’s Ramin Setoodeh, which includes in-depth interviews with the women of the “The View.” In one such interview (an excerpt of which was released Monday), O’Donnell said “there were underlying lesbian undertones on both parts,” referring to her and Hasselbeck’s work relationship. When asked about O’Donnell’s claims that the two had “mutual crushes” on each other, Hasselbeck was quick to deny O’Donnell’s account.

“That’s a breath of the Holy Spirit. Like please, Holy Spirit, work through me right now so I don’t answer my own mind,” Hasselbeck said to laughter from the audience.

She continued, “I think what she said was reckless, untrue and not only insulting, disturbing, when it comes to how she felt about somebody in the workplace. If you replace what Rosie said and you take her name out and you put in Ruben or Robert, then we would be in a situation where you would see the objectification of a woman in the workplace. And that’s disturbing because where we may be really against that when it comes from a man to a woman, you don’t get a pass because you’re a lesbian objectifying a woman in the workplace. You just don’t.”

Hasselbeck didn’t only have a problem with O’Donnell’s assumptions about their relationship, but also O’Donnell’s assertion that female athletes are “at least a little bit gay,” citing the fact that Hasselbeck was an accomplished softball player.

“If you’re an athletic girl, and you’re competitive and you’re gritty, and I wore eye black and I slid into second base. And if you’re a runner or a pitcher or whatever your sport it is, it’s a lie and it’s reckless to attach a sexuality to that. And I think it’s selfish on her part,” Hasselbeck said.

Despite her criticism, Hasselbeck said she still respects O’Donnell as a former co-host and professional, and added that she attempted to reach out to her in order to make amends.

“I forgive Rosie. I absolutely forgive her because I was disturbed by what she said, and I was offended by it. And she has my forgiveness full-heart, and I pray that she can have the peace that she deserves. That’s my ultimate prayer,” Hasselbeck said.