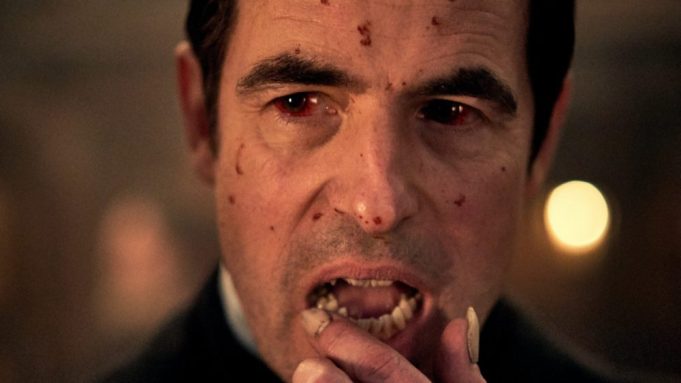 Nuns with stakes at the ready, crucifixes, bats, and, of course exposed neck flesh all feature in the bloody first trailer for the hotly anticipated BBC and Netflix adaptation of Bram Stoker’s Dracula story.

The dark teaser trailer comes complete with a “horror” warning label and does not disappoint fans of the genre. It opens with an image of blood splashing onto parchment before offering glimpses of a fly crawling into an eyeball, a gruesome dislodged fingernail, and a vampire in a crate.

To the strains of “Psycho”-esque music and screams, Claes Bang bares his fangs as the count. He ominously tells what appears to be a soon-to-be victim: “Stay calm – you’re doing very well.”

This series follows Dracula from his origins in Eastern Europe to his battles with Van Helsing’s descendant and beyond. The trailer dropped at London Comic Con over the weekend.

The BBC and Netflix drama will run to three 90-minute installments. Mark Gatiss and Steven Moffat are writing, reuniting the pair who worked together on Hartswood Films-produced “Sherlock.” Hartswood is making the new Dracula series.

There were also new first-look images of Bang as Dracula, and of Dolly Wells as Sister Agatha and Joanna Scanlan as the Mother Superior.

The series will bow on the BBC in the U.K. Netflix will launch it in all other international territories.

There was also a new shot of John Heffernan as Jonathan Harker.