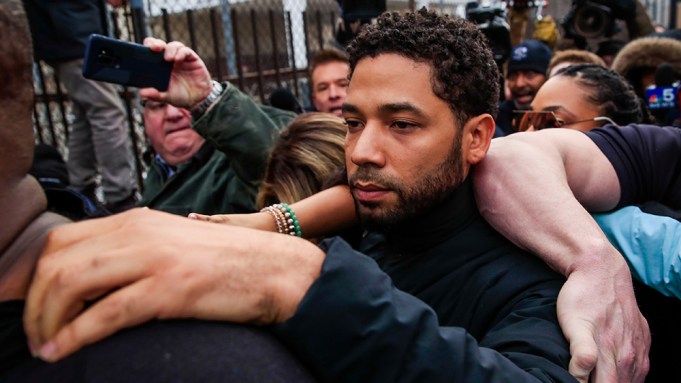 President Donald Trump has weighed in on the Jussie Smollett saga, calling prosecutors’ decision to drop all charges against the “Empire” star “an embarrassment to our Nation.”

On Twitter, the president called on the FBI and the Justice Department to “review” the “outrageous” case, but failed to provide more specifics. Smollett allegedly faked a hate crime and had been indicted on 16 counts of filing a false police report. On Tuesday morning, the Cook County State’s Attorney’s office dismissed the charges against Smollett in exchange for the actor forfeiting a $10,000 bond payment to the city. Smollett did not have to admit guilt and has used the move by prosecutors to claim he has been vindicated. The decision to drop charges has been condemned by police and by Chicago Mayor Rahm Emanuel.

FBI & DOJ to review the outrageous Jussie Smollett case in Chicago. It is an embarrassment to our Nation!

Trump was initially sympathetic when news broke that Smollett had been attacked by assailants who allegedly shouted racist and homophobic slurs as the tied a rope around his neck and doused him with bleach. In January, the president called the alleged attack “horrible” and noted that it “doesn’t get any worse.” As Smollett’s story began to unravel the president changed his tone. He hit back at reports that Smollett’s attackers had been wearing MAGA hats, tweeting, “What about MAGA and the tens of millions of people you insulted with your racist and dangerous comments?”

A police investigation found that Smollett paid brothers Abel and Ola Osundairo to stage a hate attack against himself on Jan. 29. After charges were dropped this week, Smollett told the media that he had been “truthful and consistent on every level from day one.”

Having weighed in on American jurisprudence and Smollett, Trump pivoted to “Morning Joe’s” ratings.

“Wow, ratings for ‘Morning Joe,’ which were really bad in the first place, just ‘tanked’ with the release of the Mueller Report,” he tweeted. “Likewise, other shows on MSNBC and CNN have gone down by as much as 50%. Just shows, Fake News never wins!”