Don Lemon Talks Kevin Hart: ‘It Is Not His Dream to Be an Ally’ 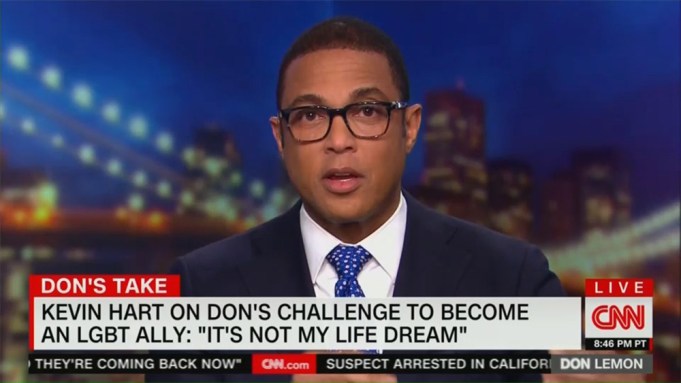 As speculation continues about whether Kevin Hart will return as Oscars host, CNN anchor Don Lemon revealed Monday night that he spoke with Hart over the weekend in an off the record conversation.

Lemon, who gave a passionate criticism of Hart’s comments on “The Ellen Show” during his own show on Friday, said he spoke to Hart for over an hour.

“It was a mostly off the record conversation because I wanted him to be honest with me,” Lemon said. The “CNN Tonight” segment followed Hart’s comments on his “Straight From the Hart” SiriusXM radio show that aired on Laugh Out Loud Radio Channel 96 Monday evening. On the show, Hart once again apologized for his past jokes, though he also defended his intent behind them.

Lemon lost the plot a bit, acting visibly nervous, if not defensive, of Hart’s comments on “Straight From the Hart,” where he said Hart had no desire to be an ally to the LGBT community — something Lemon had urged him to become in his Jan. 4 critique.

Lemon continued, “So listen, there’s been a lot of Kevin backed out of hosting the Oscars, and on some level you can understand for him that it may feel like he’s under attack. Because he’s in the middle of it. But I will tell you for me as I relate to him and I can talk about my part, he’s not a victim. So listen to what he’s saying there. He wants to be accepted. He wants us to accept him. He wants to be embraced on his own merits. Isn’t that what the LGBT community wants? Isn’t that the same thing they were asking for, to be embraced on their own merits and not be stereotyped and stigmatized? So maybe — right? An olive branch in an effort to understand.”

Hart was announced as the host of the 91st annual Academy Awards Dec. 4, but stepped down following backlash over homophobic tweets from the early 2000s. The matter was considered mostly closed until Jan. 3, when Hart told Variety that he had no intention of returning to the Oscars as host, but hours later told Ellen DeGeneres that he may in fact be reconsidering the offer. The Academy revealed the following day it would still be willing to accept Hart as a host if he approached the group about returning.