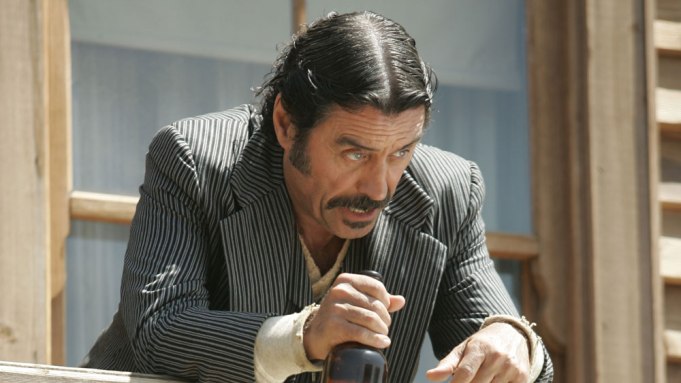 HBO is taking fans back to Deadwood.

Nearly 13 years after the hit Western series ended, HBO Films has released the first look at “Deadwood: The Movie.” The film will premiere on the network on May 31.

Series regulars Ian McShane, Timothy Olyphant, Molly Parker and John Hawkes will reprise their roles in the film, which will take place 12 years after the show ended its story. The residents of Deadwood have reunited to celebrate South Dakota’s statehood in 1889, but time has taken a toll on the characters, especially Al Swearengen (McShane). He butts heads with Sheriff Seth Bullock (Olyphant) in the trailer, which is full of Wild West shootings, hangings and tension.

“Deadwood” creator David Milch has returned to write the television film, and Daniel Minahan will direct, after helming several episodes of the original series, “Game of Thrones” and “Six Feet Under.”

The series originally ran for three seasons from 2004-2006 and picked up eight Emmys. Many critics regard it as one of the best television dramas of all time. Talks of a film continuation have been in the works since the show’s cancellation, but HBO didn’t formally announce the movie’s production until its Television Critics Association summer press tour last July.

“All of these people worked hard to get this together,” HBO programming president Casey Bloys said at the time. “It’s been a logistics nightmare getting all the cast members’ schedules together, but we are there.”