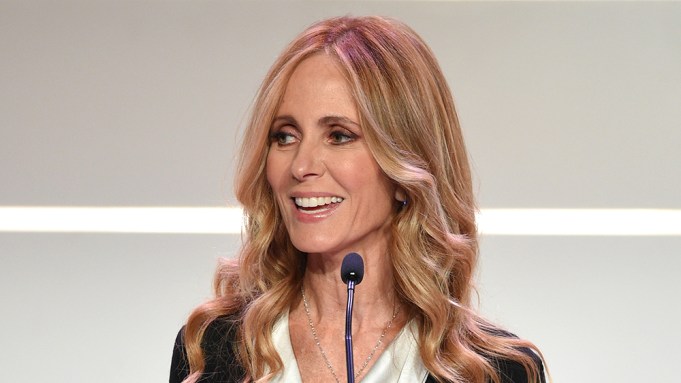 Disney-ABC executive Dana Walden talked about the importance of being a role model for young women and her commitment to helping fund cancer research Friday at Variety’s Power of Women event presented by Lifetime.

The chairman of Disney Television Studios and ABC Entertainment was recognized for her fundraising work with UCLA’s Jonsson Comprehensive Cancer Center. She was introduced by Ryan Murphy, who thanked the executive for her support both in his television career and when his son Ford faced a serious health challenge.

“Dana has the best intel on the best doctors,” Murphy said. “Ford had neuroblastoma and the doctor said this was bad. The first person I called was Dana,” Murphy recounted, describing how Walden sprung into action to help the family get the best care, “I’m so proud to proclaim he’s cancer-free.”

“That story made me a little emotional,” Walden said, taking the podium. “Ryan has done more for women in the business than anyone I know. He’s a relentless advocate for equality.”

Walden then described how she became involved with the Jonsson Cancer Center after her mother was diagnosed with cancer.

“For me that call came 11 years ago. My wonderful mother Sheril was diagnosed with lymphoma when she was 71 years old and that day was just so awful.”

Walden recounted the poor impression the family got from her mother’s first doctor, who said, “He said he was going to hit the cancer with a mallet.”

“We needed to get a second opinion,” Walden related, “and I was connected to someone who was truly extraordinary, Dr. Judy Gasson…the first woman to run a major U.S. cancer research center.”

“A lot of us here have high-pressured jobs,” Walden said. “When I feel very stressed out, I like to remind myself that I am not curing cancer or saving lives, even though I think we’re making some really good TV shows.” But the UCLA doctors at the Jonsson Center “are curing cancer and saving lives.”

“My mother was treated at UCLA…it did put her into remission,” she said, describing the breakthroughs in targeted therapies developed in UCLA labs. “The progress they are making is breathtaking.”

“It’s impossible to overstate the importance to young women how important it is to see female leaders,” Walden said of Dr. Gasson.

“I know how much it meant to me to see female leaders as I was coming up in the business. There weren’t a lot of them – which placed greater burden and responsibility on the few. But for them, I wouldn’t be standing here today.”

“Today there are female leaders throughout all the big media companies. I’m especially proud to look out and see four female presidents, working with me inside of Disney Television Studios and ABC Entertainment. We’ve come such a long way and we have so much positive momentum. I feel just as confident that a woman will have my job one day as, perhaps, a man.”

“I’ve been supported and elevated by male bosses throughout my career who have mentored me and appreciate the role of equality,” Walden finished, giving a shoutout to Walt Disney Television chair Peter Rice.