Comic-Con 2019 TV Schedule: When Are Your Favorite Shows Taking Over San Diego? 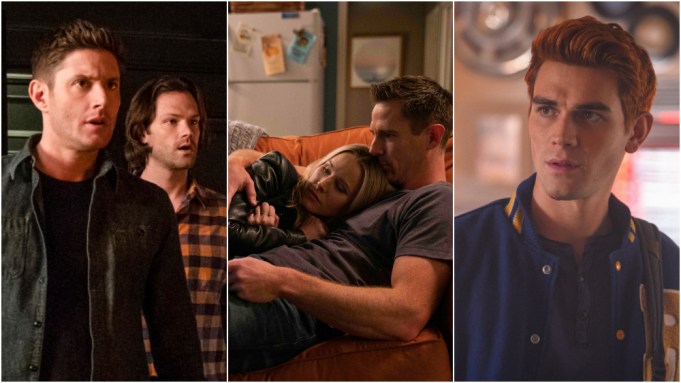 This year’s San Diego Comic-Con has a feast of TV show panels and special screenings for fans. To keep you updated on the happenings this year, Variety is compiling a master list of the experiences for the July 17 to July 21 pop culture convention.

Warner Bros. Television Studios was the first to announce its schedule, followed by FX, but check back here for more updates as they become available.

The Order (12:30-1:30 p.m., Indigo Ballroom) The cast, showrunner, writer and executive producers will host a panel and Q & A for the second season of Netflix’s supernatural show “The Order.”

Evil (12:45 p.m. – 2:00 p.m., Ballroom 20) The new CBS series, premiering this fall, follows a skeptic female psychologist who forms unlikely friendships with a priest-in-training and a carpenter who work together to unravel the church’s miraculous mysteries. Series stars Katja Herbers, Mike Colter, Aasif Mandvi and Michael Emerson along with co-creators and executive producers Robert King and Michelle King will present an exclusive sneak peek of the first episode followed by a panel discussion.

Undone (1:45 p.m.-2:45 p.m., Indigo Ballroom) Raphael Bob-Waksberg and Kate Purdy, the creators of “BoJack Horseman,” will sit on a panel for their new show “Undone,” about a young woman’s journey to solve the mystery of her father’s death.

Veronica Mars (11:30 a.m.–12:45 p.m., Ballroom 20‪) Attendees at the convention will be the first to see the premiere episode of the fourth season, coming to Hulu at the end of July. Cast and producers to be announced will also take part in a Q&A.

The Witcher (2:15-3 p.m., Hall H) Netflix’s original series centers around famed monster hunter, Geralt of Rivia. Be introduced to the world of The Continent, where humans, elves, witchers, gnomes, and monsters battle to survive and thrive, and where good and evil is not easily identified via a panel that includes cast members Henry Cavill, Anya Chalotra, and Freya Allan alongside, showrunner Lauren Schmidt Hissrich.

Legacies (3:15-4:15 p.m., Room 6BCF) The cast and producers of the CW’s spinoff of “The Vampire Diaries” returns to San Diego with a special video presentation and Q&A. Specific panelists will be announced at a later date.

The Dark Crystal: Age of Resistance (3:30-5:15 p.m.) Netflix presents an exclusive sneak peek at the highly-anticipated fantasy series based on Jim Henson’s groundbreaking 1982 feature film, “The Dark Crystal.” In this new prequel, three Gelfling discover the horrifying secret behind the Skeksis’ power, and set out on an epic journey to ignite the fires of rebellion and save their world. Realized using classic puppetry with cutting edge visual effects, the cast and creators discuss all of your burning questions about bringing Thra to life. Specific panelists will be announced at a later date.

Pennyworth (4:30-5:30 p.m., Room 6BCF) The new Epix origin story for Alfred Pennyworth, a former special forces officer who goes to work for the Wayne family will offer a special video presentation and Q&A at the con just ahead of its series premiere.

The Terror: Infamy (4:45-5:35 p.m., Room 6A) Cast members Derek Mio, George Takei, Kiki Sukezane and Cristina Rodlo, along with co-creators and executive producers Alexander Woo and Max Borenstein will be on the panel.

Archer (5 p.m., Indigo Ballroom) In celebration of its 10th season, the FXX comedy returns to San Diego with a sneak peek of the penultimate episode of the season, followed by a Q&A with the voice cast of H. Jon Benjamin, Aisha Tyler, Jessica Walter, Chris Parnell, Judy Greer, Amber Nash and Lucky Yates, plus executive producers Matt Thompson and Casey Willis.

Creepshow (5:45pm-6:45pm, Room 6BCF)  Shudder, AMC Networks’ premium streaming service for horror, thriller and the supernatural, will share an exclusive sneak peek of “Creepshow,” the upcoming anthology series based on the 1982 film written by Stephen King and directed by George A. Romero. Panelists include Giancarlo Esposito, Tricia Helfer (“Battlestar Galactica”) and Adrienne Barbeau, along with showrunner Greg Nicotero (“The Walking Dead”) and author Joe Hill.

Preacher (7-8p.m., Hall H) Executive producer Seth Rogen and cast members Dominic Cooper, Ruth Negga, Graham McTavish and Mark Harelik will be a part of the panel for the final season of the AMC drama.

The Boys (7-11:30 p.m., MLK and 1st) Cast and creators will screen an exclusive two episode sneak preview. Afterwards, there will be a party.

Rooster Teeth (8–9 p.m., Room 6DE) The production company presents a special video and Q&A experience with panelists to be announced at a later date.

Batwoman (‪10:30–11:45 a.m., Ballroom 20) The DC on CW’s latest drama centers on Kate Kane (Ruby Rose), who decides to take up the crime-fighting mantel. Attendees will learn exactly how and why she does with a special pilot screening well ahead of the show’s October series premiere. A Q&A featuring cast and producers to be announced is also planned.

Ripley’s Believe It or Not! Extraordinary Humans Revealed with Bruce Campbell (4-4:50 p.m., Indigo Ballroom) “Evil Dead” star Bruce Campbell will host a panel with some of the extraordinary people featured in “Ripley’s Believe It or Not!” including a man with a skull twice as the thick as the average, an actress with a highly sophisticated prosthetic arm, and a man that doesn’t let his small stature stop him from performing.

Supergirl (4:15-5:00 p.m., Ballroom 20) Celebrating the upcoming fifth season, the female-led DC on CW drama will present a special video and Q&A panel with cast and crew to be announced at a later date.

The Flash (5:45–6:30 p.m., Ballroom 20) The DC on CW fun rounds out with a special video presentation and Q&A panel featuring the cast and creative team behind “The Flash,” which is heading into its sixth season this fall.

Supernatural (10:30–11:30 a.m., Hall H) The longest-running CW drama takes its last Comic-Con victory lap with a special video presentation and panel ahead of the October season premiere of its 15th and final season.

Riverdale (11:45 a.m.–12:45p.m., Hall H) The first in the Archie-verse and only series to represent at this year’s convention, “Riverdale” will return to Comic-Con with a special video presentation and panel featuring cast and creatives, who will be announced at a later date.

Ghost Adventures Live! (1-2 p.m.) Zak Bagans and his paranormal team including Aaron Goodwin, Jay Wasley and Billy Tolley will share their most memorable ghost stories during a panel discussion.

Brooklyn Nine-Nine Experience Fans have a chance to put their skills to the test and see if they have what it takes to join the 99th precinct. An immersive experience will throw funny tasks at attendees inside of the precinct. Photo opportunities, exclusive content and giveaways will be available at the activation. The activation will run from Thursday to Sunday at the Gaslamp Square.

Carpool Karaoke the Mic At “Space J” within the Interactive Zone at Petco Park, fans will be able to recreate James Corden’s viral “Carpool Karaoke” segments by hopping inside a Range Rover to sing along to their favorite songs.

The Dark Knight DC will be celebrating 80 years of Batman by bringing real-life costumes, props and memorabilia from “The Dark Knight” trilogy to the DC WB booth on the convention floor. Photo ops will be available with the items all weekend.

The Good Place Diner – The Interdimensional Hole of Pancakes The interdimensional pancake diner is coming to Comic-Con and will be serving up themed meals. The diner will run from Thursday to Sunday at Maryjane’s Diner at the Hard Rock Hotel.

Harley Quinn To celebrate DC Universe’s upcoming comedy, the digital net will bring fans into Arkham with an immersive activation.

Jean-Luc Picard: The First Duty Exhibit The special exhibition will showcase original props, costumes, and other artifacts featured in the new CBS series “Star Trek: Picard.” Located at the Michael J Wolf Fine Arts at 363 Fifth Ave., the gallery will be open the Thursday, Friday and Saturday of Comic-Con.

Pennyworth Visitors can enter the Oxford Social Club, transporting back into 1960s London to see the origin of Batman’s butler Alfred Pennyworth. Visitors will then walk through the library, the Raven club and eventually the dungeon. The experience will be open July 18 11 a.m.-5 p.m., July 19 10 a.m. to 7 p.m., July 20 10 a.m.-7 p.m. at the Oxford Social Club at Pendry San Diego.

Riverdale Fans of the Archie Comics series can grab a booth at Pop’s Diner for photo ops and fun. Elements from the CW series set will be reassembled on the convention floor for a closer look at the world of the show.

Star Trek Universe Exclusive Pins A limited number of exclusive “Star Trek” pins will be offered all week to those who visit and complete the “Star Trek” transporter experience on the show floor. Exclusive pins, featuring the debut of characters from “Star Trek: Lower Decks” will also be available at the “Star Trek” booth Saturday and Sunday.  Lastly, at the “Jean-Luc Picard: The First Duty” museum experience at Michael J. Wolf Fine Arts, fans can get exclusive replica pins of the Picard family crest as featured in “Star Trek: Picard.”

Superstore Cloud 9 Pop-Up The pop-up will feature the Cloud 9 Department Store with exclusive content, a custom photo opportunity and a “customer service” desk that will host exclusive NBC giveaways. The pop-up will run from Thursday to Sunday inside the Hard Rock Hotel main lobby.

The Twilight Zone Experience The immersive experience will allow fans to enter the “Twilight Zone” universe via sight, sound, and mind. The interactive exhibit, located in the Interactive Zone at Petco Park, will be open from Thursday to Sunday. Free tickets can be reserved at StepIntoTheTwilightZone.com.

Crank Yankers – Yankerville (Booth #3729) The immersive experience will allow fans to interact with a giant wall of fake phones from which they can listen into “crank” calls from the upcoming season.

OVERLOOKING ALL OF DOWNTOWN SAN DIEGO

ENJOY CLASSIC CARNIVAL ACTIVITIES WITH A FOX TWIST AND

SEVEN FOX SERIES, INCLUDING NEW SERIES “BLESS THE HARTS,” “NEXT” AND “WHAT JUST HAPPENED??! WITH FRED SAVAGE”; AND RETURNING FAVORITES

“THE SIMPSONS,” BOB’S BURGERS,” “FAMILY GUY” AND “THE ORVILLE”