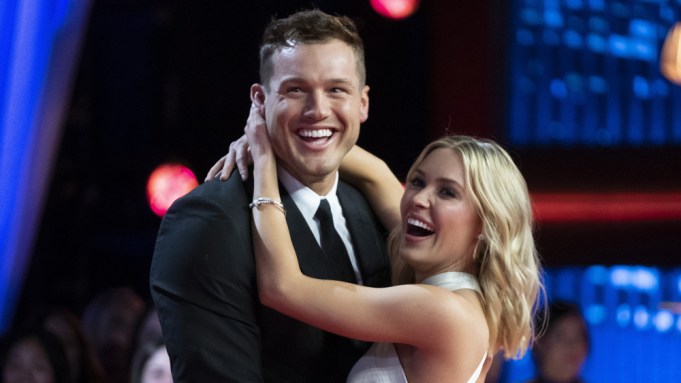 Season 23 of “The Bachelor” wrapped up this week with an unprecedented finale: Leading man Colton nearly quit the show when he was dumped by contestant Cassie. He ended up getting a second chance with her, the couple reunited, and ended the finale in a relationship, but without a proposal and engagement.

Typically, “The Bachelor” and “The Bachelorette” end with a proposal because that’s been the final step in the series’ format, ever since the hit ABC reality show debuted in 2002.

“At times, you sort of get caught in this groove and going through the motions of what ‘The Bachelor’ is supposed to do. In previous seasons, the Bachelor is just supposed to fall back on his plan B,” Colton told Variety in a recent sit-down interview, alongside Cassie. “This is my life. And this is somebody who I fell in love with and I cared for deeply and I wasn’t willing to let that walk away without seeing if we could make that work without the cameras.”

Bucking the system, Colton’s actions received polarizing opinions on social media from Bachelor Nation with many critics (full disclosure: including this reporter) heralding him as the most realistic “Bachelor” the franchise has ever seen.

Also unlike previous “Bachelor” stars? Colton is a virgin. His virginity was used heavily as a marketing tool to sell the season, and every single episode made a point to remind viewers at home that he’s still a virgin.

“I don’t think it was exploited in a negative way. Do I think it was overplayed? Yes. That’s what I can say,” Colton says. “But exploited? No.”

Previous contestants on “The Bachelor” franchise, including fan-favorite Ashley I., have been open about their virginity, but no other cast member’s sex life has received the spotlight quite like Colton’s.

Now that he’s happily dating Cassie, the couple has declined to reveal whether or not Colton lost his virginity, but while speaking to Variety, they did weigh in on the double standard on illuminating a man’s virginity on national TV.

“I can tell you, if it was a girl, it wouldn’t have been as in your face,” Colton chimes in. “I would definitely say that.”

Here, Colton and Cassie sit down with Variety to discuss their happy ending, their future engagement, and their thoughts on the next “Bachelorette.”

During your appearance on “Jimmy Kimmel Live,” you were given an engagement ring from Neil Lane. Cassie, you’re clearly not wearing it, so where is the ring? And do you plan to use it any time soon?

COLTON: The ring is in a safe spot. We have some conversations that we’re going to have, and we still have a few steps before we get there. We have been talking about it. We’re very confident in where our relationship is now, but we’re enjoying dating, we’re enjoying taking this day by day still, just like you saw when we left the show. We’re having fun. We’re in love. And we can’t wait to continue to push our relationship.

CASSIE: We don’t necessarily have a timeline, but we’ve talked about our future. It’s definitely going to happen, but we just don’t know when.

When you get engaged, would you want your wedding to be televised by ABC?

CASSIE: That’s something we haven’t really thought about at this point.

COLTON: One step at a time. It depends where we’re at in our lives and what’s best. All of our decisions here on out … is what’s best for our relationship. If it’s best for our relationship — I don’t know what circumstance that would be — for it to be televised, then great. But if not, a small intimate destination wedding sounds really good to me, too.

Do you think that you two not getting engaged will change the format of the show, and put less pressure on contestants to go through with a proposal and engagement on the finale?

COLTON: I think everybody has their own way of how they handle “The Bachelor” and “The Bachelorette,” and for me, I was willing to throw the whole entire show and being the Bachelor to the side for Cassie and for our relationship and to do what was best and do what was right.

Do you think that the format of the show, in terms of expecting a proposal on the finale, is unrealistic and needs to change?

COLTON: No, I don’t. I was very grateful and very humbled by being named “The Bachelor” and you’re put in a unique position that no one’s ever been put in before and you try to keep your options for as long as you can, and fortunately for me, I couldn’t keep my options open any longer — she had my heart.

What do you say to people who say you can’t find love on reality TV?

COLTON: I think something for me that I’ve spoken openly about is that I had an understanding of what I was getting into. I had an understanding that we were making a TV show, and I can separate the two, of making a good TV show and still finding my person or finding love — they aren’t mutually exclusive, so you can do it. For me, I wasn’t going to sacrifice a relationship and love, just to go along with a format of a show.

CASSIE: I think there was a point where the whole topic on Colton’s virginity got a little out of hand, but I think Colton’s handled it really well and being open and honest about that — that’s one of the things I love the most about him, that he’s so himself. We’ve decided to kind of shut that door and not discuss it because it’s weird having the entire world talk about your sex life

COLTON: [Cassie] was like, “You’ve been very open, you’ve been very candid. You gave them a little and they’ve taken a lot — they’ve taken it and ran with it, so it’s your right to take it back whenever you want and have control over it.” I don’t ever regret it. Do I think it was exploited? No, because I can’t tell you how many people have reached out to me and said, “Hey, thanks for talking about this, thanks for opening up about this because you’ve allowed me to be comfortable with who I am and the decisions that I’ve been making in my life.” I would have never guessed these people would have been reaching out to me and talking to me. For me, I’m willing to be a voice, I’m willing to stand out and take some criticism if I’m helping anybody.

CASSIE: I feel like no matter what you say, responding to someone, whether it’s saying “yes” or saying “no,” unless you stop talking about it, people are just going to continue to talk about it, until you just stop.

COLTON: I grew up as an athlete. I grew up with the locker room banter. I consider myself to have thick skin — I can play along with a joke and I can go along with it. I can take it. And I think the they sort of read that — the show would have never put me in an uncomfortable situation. They knew right off the bat, even with the popping the cherry and all of that, that they never took it too far. [A contestant popped a “cherry” balloon on the first episode of the show.]

Cassie, have you had negative reaction toward you on social media with people saying you’re not actually in love with Colton, since you walked away from him on the show?

CASSIE: I think people’s opinions are really split, mostly because they didn’t really understand what was going on because I wasn’t necessarily very good at articulating it, but for me, I came in here with intentions of possibly getting engaged to Colton … but I didn’t realize, coming into being on “The Bachelor,” how little time you’re going to get and how it works. You have no idea until you’re in it. You see couples come out of it happily engaged so I thought it must be possible, but for me, I wasn’t able to get there in time.

Colton, let’s talk about the night that you jumped the fence. Were you actually prepared to completely leave and quit the show?

COLTON: Yeah. I was done. In that moment when I took off my microphone, I was done with being the Bachelor. I had some conversations and it was a long night, there wasn’t a lot of sleep, and everyone was trying to figure out where do we go from here. … It was a moment where I realized, it’s over. I don’t know how you’re [production] going to wrap this up and how you’re going to end this, but tonight, I made up my mind. I don’t want to continue without her. They did a great job of allowing me to at least have a chance to ask for her back and doing the right thing, allowing me to follow my heart, finding somebody that I wanted to spend the rest of my life with.

Chris Harrison said on “Good Morning America” that you were upset with him and with production, while you were filming. Why were you upset?

COLTON: I think where my frustrations came in that specific situation was the time factor and realizing we needed more of it. Unfortunately, we just weren’t getting there, and I was more frustrated with where our relationship … like, now she’s leaving, so it was more of a frustration of like, we didn’t get it. But we had a conversation, we troubleshot it, and we’re here now and that’s all that matters. That’s what I told them [production] — as frustrating and as upset as I was in that moment and as heated as it was, you guys allowed me to opportunity to meet somebody who I call my best friend that I’m madly in love with.

What do you think about Hannah B., as “The Bachelorette?”

CASSIE: We’re really excited for Hannah B. I’m excited to watch her season.

COLTON: It’ll be a very interesting season. She is super herself, she’s very confident, she’s one-on-one. I’m rooting for her. I really am.