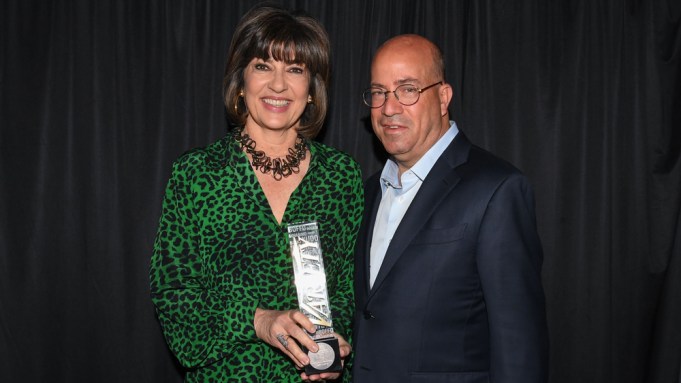 CNN chief international correspondent Christiane Amanpour called out the dangers of powerful leaders using “fake news” as a weapon against journalists “who go toward danger” to challenge despots and others.

Amanpour cited the shocking statistic that “deliberate targeting is the leading cause of death for journalists” as she was feted Friday at Variety’s Power of Women NY presented by Lifetime. She noted that the anti-press attitudes found in developing nations are spreading.

“Increasingly we are in a war from within our own democratic societies where we are bludgeoned over the head day after day by this untruthful trope of fake news. It is very, very difficult to keep going,” Amanpour said.

She also urged the crowd to support journalists who do the hard work of digging for truth. At a time of extreme polarization in the country, it’s more important than ever to do the shoe-leather work of reporting.

“There is truth,” she said. “The truth is discovered, every fact at a time, every piece of empirical evidence at a time.”

Amanpour praised the work of the Committee to Protect Journalists, the nonprofit group that aims to aid journalists and guard against incursions against press freedom. She called out CPJ executive director Joel Simon for leading the organization devoted to protecting “the truth and storytelling from those who would do us ill.”

Amanpour was introduced by Jeff Zucker, the CNN chief who is now WarnerMedia’s head of news and sports. Zucker called Amanpour “the most important journalist in the history of CNN” and the “conscience of our times.”

Amanpour cited her mantra to be “truthful and not neutral” in reporting that has taken her around the world and into the highest echelons of power. She noted that of the many world leaders she has interviewed, she has been deeply impressed by Jacinda Ardern, prime minister of New Zealand, for her response to the horrifying mass shooting that left 50 dead last month in Christchurch, New Zealand.

“Out of the most brutal and unspeakable tragedy, she rose to the occasion like I’ve seen very few world leaders do,” she said of Ardern.

“She’s an amazing woman. What really counts is that she reacted to an act of hate with love,” she said. “Each time a journalist asked her ‘What is your message today?’ She said, ‘Share love.’ Even though her country has been completely changed … she won’t build a wall. She won’t slam a door. That country has expanded and increased the number of refugees who come to New Zealand. For me that’s power.”

Amanpour demonstrated the range of her work by noting that she had interviewed Vogue boss Anna Wintour before she arrived at Variety‘s luncheon at Cipriani Midtown. Amanpour cut a chic figure in a green leopard print pantsuit. But it didn’t seem to impress Wintour.

“I’d hoped she would take a look at my green and say, ‘Who dressed you,'” Amanpour confessed. “Not a flicker.”