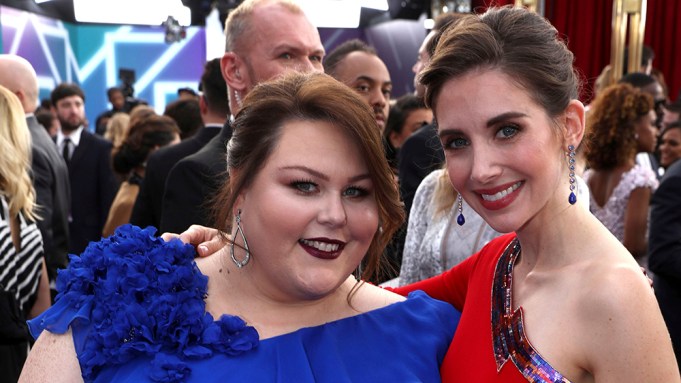 “She’s such a bitch,” the “This Is Us” actress seemingly said into her microphone as the camera panned away to introduce the “Glow” actress during their red carpet interviews on the 2019 Golden Globes Facebook Live pre-show.

Metz, who had just finished discussing the third season of her popular NBC drama, appeared not to realize the microphone was still hot when she uttered the comment as emcees Missi Pyle and AJ Gibson turned to introduce Brie on the opposite side of the carpet. Gibson later said he thought she said “She’s such a babe.”

But when Variety caught up with Metz at Fox’s Golden Globe after party, the “This Is Us” star denied making either remark – this after calling the story “completely fabricated” on Twitter.

It’s terribly unfortunate anyone would think much less run a story that was completely fabricated! I adore Alison and would never say a bad word about her, or anyone! I sure hope she knows my heart. https://t.co/IdeN2x2j9q

According to Metz, Gibson had asked her whether she knew Alison Brie at the end of their interview, to which Metz responded, “Do I?”

But after Gibson announced that Brie, nominated for the Netflix series “GLOW,” was just at the end of the carpet, Metz claims that another, unknown voice utters the controversial words, not her.

“I don’t talk about people like that,” she insisted. “I just don’t. It really gutted me for the first half of the show but then I messaged Alison .”

Brie, who didn’t seem to hear the comments during the Live chat, emailed Metz back during the show: “It’s all good. I know you. It’s just a rumor,” she allegedly replied.