Continue to Variety SKIP AD
You will be redirected back to your article in seconds
Mar 26, 2019 3:01pm PT 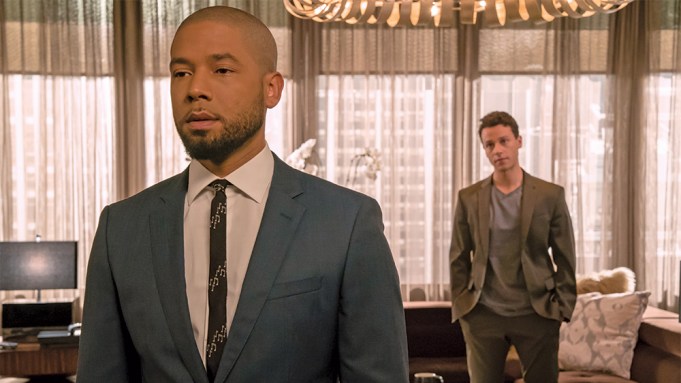 The shocking Jussie Smollett saga took another twist on Tuesday after prosecutors announced they have dropped all charges against the “Empire” star.

Smollett had been indicted on 16 counts of filing a false police report, but now that those counts have all disappeared, studio 20th Century Fox finds itself in a sticky situation as to how to proceed.

The studio’s initial move, in the wake of his arrest, was to remove Smollett and his character Jamal Lyon from the final two episodes of season 5 “to avoid further disruption on set.” However, the positive air of Fox’s statement Tuesday regarding this recent turn of events would appear to indicate the door isn’t shut for a return to the show.

“Jussie Smollett has always maintained his innocence and we are gratified on his behalf that all charges against him have been dismissed,” reps for 20th Century Fox Television said.

One option would be to simply reinstate Smollett for a potential season 6 and side with the interpretation of events coming out of the Smollett camp. According to a statement issued by his family, the actor has been “unjustly smeared” and the decision to drop all charges against him is an indication that “truth has prevailed and he has been vindicated.”

The cast and showrunner of “Empire” have been, for the most part, behind Smollett as events unfolded, and a tweet posted from the show’s official writers account shows that some are clearly anticipating Smollett’s return.

Fox could take Smollett’s word for it, put him back in the show and act like that was that, case closed.

However, the authorities, in the form of the Cook County State’s Attorney’s office, Chicago Police Department and even the Mayor of Chicago Rahm Emanuel, view things differently.

The original attorney’s office statement said that it took into account the actor’s volunteer work and his agreement to forfeit a $10,000 bond payment to the City of Chicago, and the resulting outcome was “just disposition and appropriate resolution to this case.”

Mayor Emanuel took an even firmer stance on this morning’s news.

“This is a whitewash of justice,” Emanuel said. “This is a person who has been let off scot-free with no sense of the accountability of the moral and ethical wrong of his actions.”

Given that the series’ executives, including showrunner Lee Daniels, previously said in a statement that they would be “placing (their) trust in the legal system as the process plays out,” it could be perceived as a drastic about-face if Fox decides to ignore what the authorities are saying and presume Smollett innocent.

Although Smollett may no longer have to appear in a Chicago courthouse to defend himself, Fox may also want to take into account what another court has to say on the matter.

“While the charges have been dropped from a legal standpoint, the court of public opinion is still out, and Fox is going to have to weigh how risk averse they are, especially if they find out later that the allegations are true and they take it back. That would really damage Fox’s reputation,” Gillott says.

Despite a recent downward trend in the ratings (the two episodes to air since the Smollett affair snowballed have been the lowest-rated in series history), “Empire” remains one of the Fox broadcast network’s biggest shows. A season six renewal seems likely — though now that 20th Century Fox Television is part of the Walt Disney Co. and the Fox network remains in the hands of the Murdoch family with the finalization of the Disney-Fox deal this month, the network’s business incentive for keeping a controversial and expensive show on the air may be lessened. But presuming renewal, will Smollett be going forward with the show?

If the PR nightmare the Smollett case has caused is just too much for 20th to bear as it integrates into family-friendly Disney, or if it fears what the authorities are saying is true and they would be taking back someone who has staged his own hate crime and dragged the show and studio through the mud, then another option would be to take removing him from the end of season 5 a step further and cut him out of the show entirely.

However, that move could potentially incite its own backlash in the court of public opinion and on social media, where several prominent figures in the entertainment industry have already voiced their support for Smollett and their criticisms of how Chicago PD handled the case.

The most sensible course of action for 20th, according to criminal defense lawyer Lara Yeretsian, would probably be to wait: Wait until the furor around the case has died down, wait until facts about how the police and prosecutors handled the case, and what really unfolded in the early morning hours of Jan. 29 have become clear.

“My guess is that Fox will wait a little bit, just to let things cool down,” Yeretsian says. “They could wait a little bit and hopefully everybody forgets about the case, and if they decide to take him back there won’t be an uproar about his return to the show.”

Whichever route the studio decides to go down, it seems unlikely that there will be an easy way out for the studio, or a swift resolution to the Jussie Smollett affair.