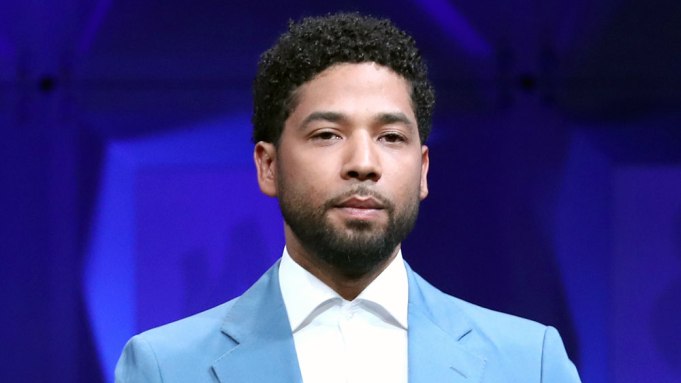 Following the arrest of Jussie Smollett on Thursday, with the “Empire” star facing charges of filing a false police report and disorderly conduct after allegedly staging an attack, celebrities and politicians were quick to weigh in on social media.

President Donald Trump tweeted Thursday morning, “What about MAGA and the tens of millions of people you insulted with your racist and dangerous comments!?” Several other right-wing commentators denounced the actor’s actions, and wondered if Democratic politicians, like Kamala Harris and Cory Booker, would retract their initial support of Smollett.

.@JussieSmollett – what about MAGA and the tens of millions of people you insulted with your racist and dangerous comments!? #MAGA

*NEW: Jussie Smollett's greed, hatred for Trump & craving to be a celebrated 'victim' made him fake a racial, homophobic attack.
He deserves no mercy, no sympathy, just our fury.
My column: https://t.co/Dh3wpC4lu0 pic.twitter.com/pGSjG3ChTX

Incredible press conference. You can really hear the frustration and emotion in Superintendent Johnson's voice. https://t.co/kWtHimlo4U

Has @FOXTV fired Jussie Smollett yet? As of yesterday they were still standing by him. I can't find the apologies nor retractions from @RobinRoberts, @EllenPage, @TheEllenShow, @KamalaHarris, @CoryBooker et al. Can you help me find them? #JussieSmollettHoax #JussieSmollett

A SAG-AFTRA spokesperson issued a statement to Variety: “Today’s report of Jussie Smollett’s alleged actions is disheartening. If true, this could lead some to disbelieve future hate crime reports. Notwithstanding this situation, we encourage others to join us in continued support for marginalized communities who are all too often the victims of intolerance and brutality.”

Los Angeles LGBT center released this statement, “The confusing and deeply unfortunate circumstances surrounding Jussie Smollett should not cloud the sobering facts about hate crimes in our nation. According to a report released by the Center for the Study of Hate and Extremism, hate crimes in our country’s largest cities increased for the fifth consecutive year in 2018—with Los Angeles receiving its highest level of hate crime reports in a decade. Do not be distracted by Mr. Smollett’s alleged staged attack. Hate crimes, particularly against people of color and the LGBT community, are real and on the rise. These facts should alarm all of us.”

The center then offered their help for anyone who has experienced an anti-LGBT hate crime, discrimination, harassment or police misconduct.

Color of Change and GLAAD sent out a combined statement also focusing on the pressing statistics of hate crimes against those in the LGBTQ community.

“As we learn more details about Jussie’s arrest, we remain focused on the urgent fight against the very real issues of racism, homophobia, and hate violence.” The statement read. “FBI data shows that hate crimes are on the rise nationwide and that fact cannot get lost in the discussion around Jussie’s arrest. While Jussie’s situation is troubling and concerning, anyone who is a victim of hate violence should never be hesitant to speak out and share their stories.”

Talks shows, like “The View” and “The Daily Show,” also tackled the controversial case. Alongside host Trevor Noah, comedian Jaboukie Young-White used his viewpoint as a gay black man to unpack Smollett’s actions.

.@jaboukie has some thoughts on Jussie Smollett: pic.twitter.com/0CJdKHjz6I

I saw Smollett speak about diversity and inclusion a week before this, on a panel moderated by @nischelleturner. He advocated for minorities/LGBTQ. If guilty, he hurts those communities and ability of real victims of hate crimes to come forward and be believed. Incomprehensible. https://t.co/giTCudbDzI

When the alleged assault on Smollett was originally reported on Jan. 29, many celebrities were outspoken with their support. Since then, some have deleted their posts following Smollett’s arrest, like Jordan Peele, Michael B. Jordan, and Speaker of the House Nancy Pelosi.

However, others have kept their posts up, like Lena Waithe, Lee Daniels, and Harris, and have yet to comment on Smollett’s charges. Actress Yvette Nicole-Brown wrote of her original statement, “I won’t delete it. It’s how I felt. I don’t hide from how I feel or what I stand for, even as situations change.”

I’ve been vocal about this situation & my love for Jussie & his entire family. I will continue to hope for the best for everyone involved as things continue to unfold. And I, like all of you, will watch them unfold. But believing victims is always the right choice. Always. ❤️

Way to go Jussie. You just handed this racist dipshit a “Get Out Of Race-Baiting Free” card that he’s gonna wave around like a soiled diaper until he’s re-elected. https://t.co/JTlg6JYSkP

My head is exploding this morning. I have to get off Twitter. This story is pathetic. All of it.

What upsets me about this Jussie situation is that people were genuinely worried about you man. And the things that you said happened could have led to some serious outcomes. People were prepared to fight for you bruh. Things coulda got ugly…… and you made it up.

Several celebrities, like director Tyler Perry, and organizations, like Out Magazine, wished the attention that Smollett received would be given to real crimes.

How I wish that the disappearance of Terrance Williams and Felipe Santos could get half as much attention as this Jussie Smollett thing. I have personally spoken to Jussie, and he is adamant that he’s telling the truth. Also, everyone that I know who knows him says that he is not the kind of person who would make up such a horrible and awful thing. Yet the evidence seems to state otherwise. I’m lost for words. To stoke fears and raise racial tensions is wrong in every situation on ALL SIDES! Yet my prayers are still with him and his family and our Nation. CAN WE PLEASE STOP THE HATE!

What Smollett did was wrong but the big problem isn’t the .2% which are hoaxes, it’s the hate crimes which have risen 20% since Trump took office.

A lot of people are misreading this as some kind of “agenda” or swipe at CPD dedicating resources to the Smollett case. It’s not. But selective justice is a real thing, and not just in Chicago https://t.co/3NcLXsuuSP

Do I think Jussie Smollett should serve jail time? No! I think he should get a slap on the wrist like the White people who file false reports on Black people…

But them White people like #PermitPatty & etc were losing their jobs, so Empire need to say goodbye to Jussie.

While #JussieSmollett occupies so much of the media attention, don’t forget that violent attacks and murders of Black trans women are VERY real, and need our collective, urgent attention. https://t.co/Y5K92H3fPp