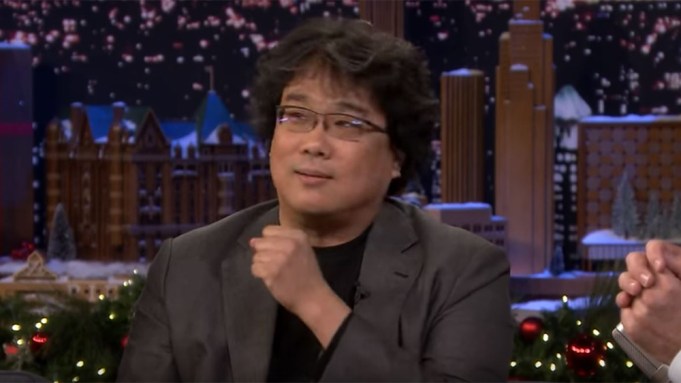 The director, who received best director and best original screenplay Globen Globe nominations with co-writer Han Jin Won, plus a best foreign language nod Monday morning, did not give much away about the film’s plot when pressed by Fallon, in typical Bong fashion.

“I’d like to say as little as possible here because the film is best when you go into it cold,” he said, via his translator, who accompanied him for the interview.

“This is a talk show, so you have to say something,” Fallon jokingly — or not — responded.

Bong relented and gave a very rough outline of the “Parasite’s” premise.

“It’s a story about family, the son goes into a rich house as a tutor and the story unfolds from there,” he explained.

“They’re all very human,” he said. “It’s just a funny and scary movie.”

Fallon then asked Bong to explain the story behind his final remarks at the screening of “Parasite” at Cannes, where the drama received an eight-minute standing ovation. After thanking the crowd, the director said simply, “Let’s all go home.”

“Actually, the screening was very late night,” Bong said. “It was almost midnight. So the standing ovation was very long but the actors and I were very hungry because we couldn’t eat dinner. We all were saying to each other, ‘We’re so hungry,’ and they ended up subtitling it in the video that was later.”

“But the applause never stopped,” he continued. “So finally I said, yeah, ‘Let’s go home.'”