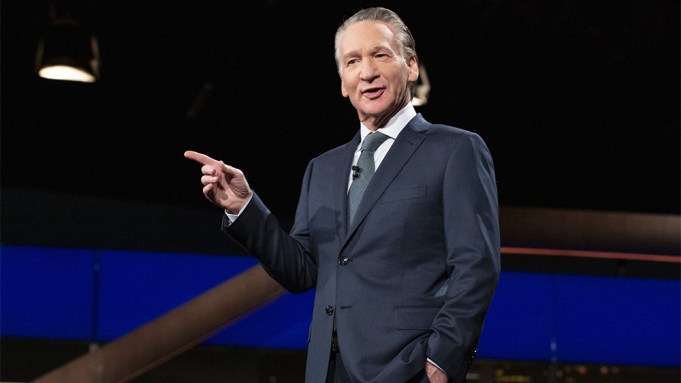 “Just what America needs, another reason to take drugs,” he joked. “Coachella lasts two weekends, like a cabinet member who works for Trump…Dozens of acts there who are competing for the affection of entitled millennials. I’m sorry, I’m thinking of the Democratic primary.”

Maher then went in on Trump’s new Attorney General William Barr, who was confirmed back in February and has been criticized for his refusal to release the Mueller report in full.

“Trump finally has the lackey Attorney General he always wanted, William Barr, he testified before Congress this week. He began by thanking the committee for the opportunity to come there and shed more darkness on the situation,” Maher deadpanned.

“This was a bad sign,” he continued. “When he took the oath, he raised his hand, the Sharpie was still in his hand.”

Maher expressed incredulity at Barr’s claim before Congress that there may have been “spying” on the Trump campaign.

“So he’s moving forward with investigating the investigators,” Maher explained. “Wow, can the rest of us do that with law enforcement? If a cop stops me, can I be like, ‘How fast was I going? How fast were you going? And why were you following me? I’m going to need to see all of your text messages, officer.'”

Trump parted ways with his Secretary of Homeland Security, Kristjen Nielsen, last week after she tendered her resignation, which, according to the New York Times, was at Trump’s request. Her departure came two days after Trump withdrew his nominee for head of Immigration and Customs Enforcement.

“So Trump spent the week firing people who aren’t tough enough on migrants,” Maher said. “Kirstjen Nielsen, the cage lady, she was not tough enough, she got fired, although she said they weren’t fighting, she just wanted to spend more time separating her family.”

Maher closed on the subject by taking a jab at Trump’s attitude towards immigrants despite his wife’s origins outside the U.S.

“Wow, this Trump is not playing. He said it again today, he does not want an America of low-skilled immigrants. And Melania said, ‘f— you too.'”