Continue to Variety SKIP AD
You will be redirected back to your article in seconds
Jul 22, 2019 7:00pm PT

‘Bachelorette’ Hannah Brown on Combating Misogyny in Front of Millions: ‘I’m So Over Being Slut Shamed’ 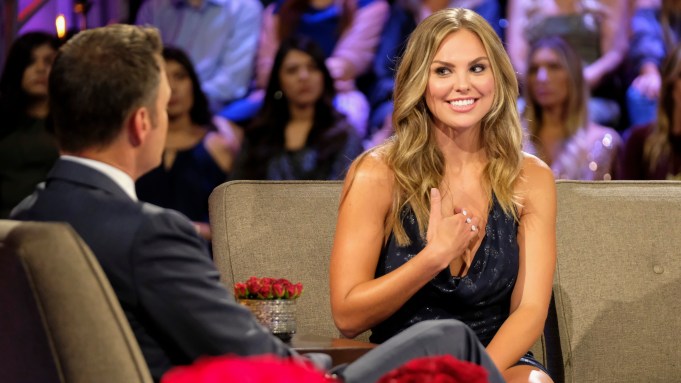 SPOILER ALERT: Do not read if you have not yet watched “The Bachelorette: Men Tell All” that aired Monday, July 22.

“The Bachelorette” Hannah Brown says that she’s proud of a lot of things she’s done on-screen this season, but she feels most gratified knowing that she was able to inspire millions of girls to combat misogyny in their relationships.

“I’m proud that the hurt and hard times I had on the show was all for something because I was able to use my experience and use that tattle voice for women who don’t have a platform,” she told Variety during the taping of “The Bachelorette: The Men Tell All” reunion in Los Angeles, Calif.

During this season of “The Bachelorette,” Luke Parker gave Brown an ultimatum during their fantasy suite date: He said he would leave her if she chose to have sex with anyone before the show wrapped (and ultimately, before marriage). She swiftly called him out for slut shaming her, telling him that she has every right to have sex with whomever she pleases.  Before he left, she proudly told him that she had indeed already had sex on the show, memorably saying, “I didn’t just go to the fantasy suite, I f—ed in a windmill. And guess what, we did it a second time.”

“My experience with Luke is one that is familiar to a lot of women and so, me speaking to Luke is a lot of women speaking to other men that have treated them similarly,” she said. “That’s what I’m really proud of — to have that moment to say what a lot of women deal with every day and wish they could say, or maybe now will have the strength or confidence to say because they know they can.”

Brown continued to stand by her decisions during the taping, using her time on the hot-seat with Chris Harrison to unpack that final date between her and Parker. Harrison pointed out the irony in how their Christian faith, which was what the two initially bonded over, ended up being the driving force in their break-up. Their divergent ideas surrounding premarital sex gave way to another notable line from Brown on the show when she said, “I had sex, and Jesus still loves me.”

She continued to explain that she was “so tired of all this about having sex means I’m not a Christian.”

“I’m so over being slut-shamed and that [it] means I’m not a woman of faith because, ‘Oh my god, I live my life and make mistakes and sin every day.’ So do you, that’s what grace is for. I know I sin and do things that aren’t always the best ,but I’m also not going to say that having sex in a windmill was the scarlet letter on my chest,” she explained.

After airing out her grievances, Brown asked Harrison if she could speak directly into the camera and make an announcement. “I’m sorry for this whole thing with Luke and him just being on our television screens for so long — way longer than any of us really desired,” she said. “I’m tired of talking about him and can we just never speak the name? The Luke P. show is canceled, we will not renew the season again. My apologies.”

Parker, on the other hand, was grilled by Harrison and the other men during his hot seat moment, saying that he was “completely blindsided” because Brown had promised him she wouldn’t have sex before marriage, a claim that Brown quickly refuted. He went on to explain why he decided to come back to the rose ceremony after she had already kicked him off, saying that he “felt like [he] was on a rescue mission for Hannah.” He also continuously referenced scripture while on stage to defend his actions. While Harrison gave ample time for Parker to apologize and redeem himself, the closest he came to apologizing was when he admitted he had made a mistake thinking Brown was the “perfect woman and wife.”

Parker continued to take heat when prior contestants Mike Johnson and Cam Ayala used their time to call out Parker for his misogyny, which was met with rallying support from the other contestants in attendance. Parker ended up leaving the reunion unannounced before the taping wrapped, most likely due to the incessant criticism throughout the night.

“The way [Luke] acted tonight, his misogynistic ways, him being just ridiculous and making a fool of himself, that’s truly who he is,” Johnson told Variety. “I f—ing love Hannah for being so strong and standing up for herself.”

Harrison also saluted Brown for her candidness on the show, admitting that it’s unfortunately rare for female participants to feel so open about their sexuality on the show. “What I love about Hannah — and talking about that she’s empowering and dynamic and she’s been so strong in this movement — she’s done it with vulnerability,” he told Variety. “There’s a misconception right now that a strong woman needs to be all-powerful, angry, always-right, always-strong — we’re not. And I say ‘we’ because I mean all of us. Men, women, we’re not always strong. We fall on our face, we fail, we’re insecure.”

However, Harrison, who has hosted the ABC dating show since its first season in 2002, doesn’t think Bachelor Nation as a whole (which refers to the millions of fans who tune into the show every week) is as supportive of women being sexual on the show.

“It ebbs and flows, but [Hannah] has been slut shamed; she’s been bashed on TV,” Harrison said. “That is what I love about this show, it does raise the level of debate in this country, and I love that. Our show is going to bring a lot of conversation about faith, about religion, about how it applies to relationships.”

And Brown has made it clear that she’s more than happy to be a part of this debate. She may never want to mention Parker’s name ever again, but she isn’t done using her platform to inspire women.

“I’m happy to have had this opportunity to stand firm and stand confident in who I am, and to not feel unworthy or dirty, because I’m not,” she told Variety.  “So heck yeah I’m a feminist, and I’m really proud of it.”

“The Bachelorette” airs Mondays at 8 p.m. on ABC.