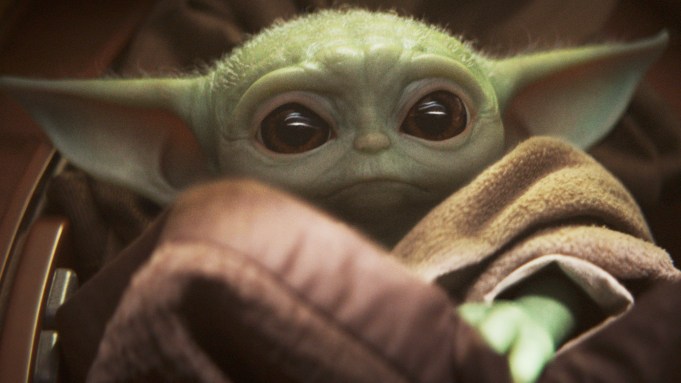 (SPOILER ALERT: Do not read on if you’re not caught up on Disney Plus’ “Star Wars” spinoff series “The Mandalorian.”)

Baby shark is yesterday’s news. Today, we celebrate the dawn of a new internet hero: Baby Yoda. Named for his resemblance to “Star Wars” icon Yoda (although fans are pretty adamant this is not the resurrection of this beloved character but a new member of the elusive species altogether), the infant’s reveal in the pilot episode was so shocking that it was described by the Oscar-nominated Werner Herzog as “heartbreakingly beautiful.”

“On the set, it looked absolutely convincing. It made you cry when you saw it,” Herzog told Variety at “The Mandalorian” fan premiere in Los Angeles. “I saw two technicians operating it remote[ly] — one was for the eyes and the mouth and the other was for other facial expressions. It’s a phenomenal technical achievement and beyond the technological achievement, it’s heartbreaking.”

The director-turned-actor was not the only member of “The Mandalorian” that was moved by the mere presence of the character. “Star Wars” newcomer Emily Swallow (the Armorer) had no choice but to stan. “I just wanted to nuzzle him on set,” she said. And Omid Abtahi was positively giddy, so happy that he put the animatronic puppet on his shoulder: “I was in love.”

But even more exciting, the home world and actual name of the species that Yoda hails from is one of the last true mysteries in the Lucasfilm universe. So why introduce a character so shrouded in intrigue? Director, writer and series producer Jon Favreau kept it simple: “I wanted to surprise people.”

“There’s bigger arcs that go through the whole season and the whole throw of the show,” Favreau continued. “As fun as it is to reveal new characters and surprise them, it also fits into a larger narrative about what’s going on in the galaxy after the revolution. This is an important character. What I’m most proud of is we surprised people. Do you know how hard it is to do that nowadays? And what type of commitment it took from everybody who was on set, and from the studio to hide all the clues — especially ‘Star Wars’ fans [who] tap into looking into toy catalogs, looking into marketing materials, looking into style guides, photography. The fact that that secret was kept is incredible”

The decision to commit to practical effects with an animatronic Baby Yoda was another big risk, but Favreau was ready to try something new. “‘Star Wars’ gives you the opportunity to tap into all these practical special effects. So there’s great puppetry, there’s great audio effects. I think with ‘Star Wars,’ there’s an acceptance of a certain look. And so I’m taking chances here that I wouldn’t take on a film that wasn’t this, but because the fans are already invested in those technologies. And then [we used] a lot of really cutting edge technologies, using game engine rendering and real-time rendering video wall set extension, using a lot of technology that we developed around ‘Lion King’ and ‘Jungle Book.'”

But it was “The Mandalorian” cast member Carl Weathers who had the truest take on Baby Yoda: “It’s one of those things that if you have kids, come Christmas, you may wind up with a little toy. I don’t think that’s going to be forgotten or missed by anyone who is into promoting.”