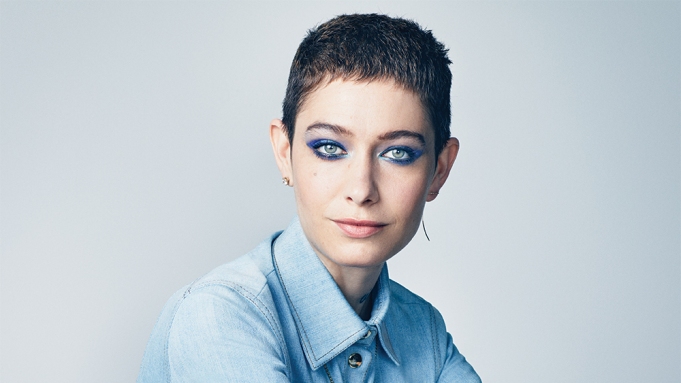 Who would have guessed that “Billions,” a cutthroat and hedonistic look at Wall Street hedge fund magnates and the politicians gunning for them, would deliver a groundbreaking representation of gender non-binary identities? Certainly not Asia Kate Dillon, who portrays non-binary investment wunderkind Taylor Mason on the Showtime series and also identifies as non-binary off-screen. The term “non-binary” encompasses a spectrum of gender identities that embraces fluidity, or does not acknowledge any conventions of gender at all. Typically, non-binary people reject traditional male and female pronouns like “he/him” and “she/her” in favor of pronouns like “they/them/theirs.”

They are also almost entirely invisible in mainstream content. “There’s a silver-lining aspect of ‘Billions’ being a teaching tool about gender identity that myself or my character might be a bridge toward understanding,” Dillon says. “I think understanding creates hope.”

What’s most significant about Dillon’s work over four seasons is its lack of tokenism. The other characters in the world of the show use Taylor’s preferred pronouns respectfully and religiously, as do the fictional news media covering Mason’s upstart investment fund from network anchor chairs. The character has also enjoyed love scenes with men (Mike Birbiglia) and women (Jade Eshete) alike.

Dillon is grateful for the platform the show has given non-binary people, but says Hollywood has far to go in depicting the diversity of that spectrum. “I was assigned female at birth, and to use the words other people use about me, I generally look fairly androgynous. Those are things that are easy for people to digest,” they said. Hollywood, Dillon added, is more comfortable with “trans women who have white body privilege and fit into our binary ideas.”

The full dimensionality of Taylor may create hope, as Dillon says. In another landmark example of representation, the producers of the Keanu Reeves franchise “John Wick” approached Dillon to play a shadowy antagonist in this summer’s third installment, subtitled “Parabellum,” which has so far grossed more than $275 million worldwide. “For ‘John Wick’ to open as the No. 1 movie in the world is incredibly gratifying,” Dillon says. “I’m really proud that people are responding to that.”

The star has also garnered awards attention, which raised questions around the legacy practice of awarding men and women in separate acting categories. A rising movement to remove gender from nominee categories like best actor and best actress has been brewing for years, but the MTV Movie & TV Awards has been the only ceremony to step up and make the change.

In 2017, Dillon made headlines for opening a dialogue about submitting themselves to a gendered category of their choosing in the Emmy race. One year later, Dillon was nominated for a Critics’ Choice Award for supporting actor. Given that voters autonomously decide which performers go in what categories, Dillon agreed with the critics’ assessment and accepted the nomination.

Dillon’s push for visibility does not end on-screen. They are expanding their work behind the camera through a production company called Mirror/Fire, founded in 2016, whose mission is to uplift marginalized and underrepresented people through storytelling.

Helping all those on the margins of society is vital to moving forward, they say. “These are the people who receive not only the most backlash from hateful and discriminatory rhetoric — like the kind that is coming out of our [presidential] administration — but also the backlash of progress,” Dillon says. “They have the blueprints for solutions as we work toward building our intersectional future.”

While Dillon’s trajectory is unquestionably trailblazing, they refuse to take any credit, especially as June marks Pride Month and the 50th anniversary of the Stonewall riots. “Pride to me means spending a lot of time in reflection of the people who came before, who blazed the trail that I have gotten to join,” Dillon says. “People like Marsha P. Johnson and Sylvia Rivera and James Baldwin … the queer people, trans women and people of color in particular, who started the revolution long before I was born.

I would not be here myself, visible, without their literal blood, sweat and tears. Pride is about acknowledgment of the history that I’m a part of.”