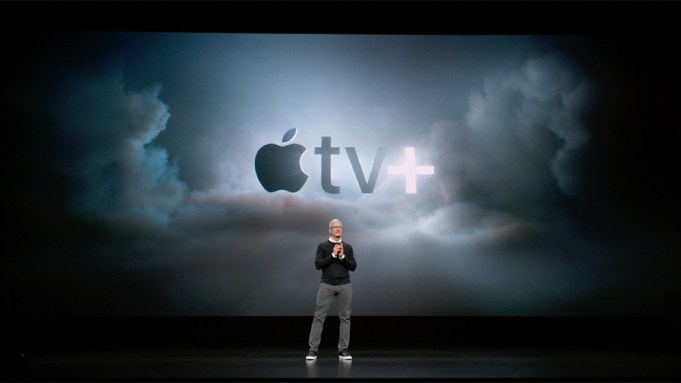 “TV is more than just entertainment, it’s cultural,” Cook said Monday at a presentation at the company’s headquarters in Cupertino, Calif. “TV at its best enriches our lives and we can share it with people we love.”

Monday was light on specifics such as how much the new subscription service will cost or when exactly it will launch, but heavy on star power. Spielberg touted the revival of his “Amazing Stories” anthology. Jennifer Aniston, Reese Witherspoon, and Steve Carell teased their new drama “The Morning Show,” which they promised would take viewers “behind closed doors of morning TV.”

The TV portion of Monday’s presentation — which also introduced new Apple services in news, finance, and gaming — in many ways revealed a traditional television upfront presentation (minus the pitch to advertisers). Top-tier talent was dispatched onstage to burnish the Apple brand, such as when Sara Bareilles and J.J. Abrams teased their series “Little Voice,” which Bareilles then performed the theme song to live. Momoa and Woodard touted drama “Seeing,” and Nanjiani was on hand to promote his new show “Little America.” “Sesame Street” character Big Bird also appeared to announce a new Apple+ children’s show from producer Sesame Workshop, “Helpsters.”

Oprah Winfrey was the final talent to make an appearance, bookending the TV presentation with Spielberg. “We have a unique opportunity to rise to our best selves in how we use and choose to use our technology and our humanity,” said Winfrey, who last year signed a television deal with Apple.

Original programming was not the only TV offering hyped Monday. Introducing a redesigned Apple TV service, VP of services Peter Stern revealed Apple TV Channels, a new service that will aggregate channels and services that customers subscribe to — with partners including Spectrum, DirecTV, Optimum, Hulu, Playstation, FuboTV, and Amazon Prime Video. Stern touted a user experience in which shows from multiple services, including Apple TV+ will be available in one place. Stern promised that the user experience will eliminate the need for viewers to move in and out of apps to get to programming.

Anticipation for Apple’s streaming-video product has been steadily building since 2017, when the tech giant hired Sony Pictures Television veterans Jamie Erlicht and Zack Van Amburg, also on hand Monday, to oversee a new content division. Apple then quickly went about ordering a fleet of original live-action series progams, including a Witherspoon Aniston  show drama; a half-hour series starring Hailee Steinfeld as Emily Dickinson; dramas “Little Voices” and “My Glory Was I Had Such Friends” — the latter starring Jennifer Garner — from executive producer J.J. Abrams; drama “Are You Sleeping” starring Octavia Spencer; an adaptation of the book “Defending Jacob” from executive producer and star Chris Evans; a CIA drama starring “Captain Marvel’s” Brie Larson; and comedy about a video-game development studio from “It’s Always Sunny in Philadelphia” executive producers Rob McElhenney and Charlie Day.

But even as Apple built out is slate, secrecy shrouded the company’s distribution plans. Creative partners have until very recently been kept in the dark about about how Apple would ultimately serve its programs to consumers. Much of the anticipation leading up to Monday’s event was the result of Apple’s having been so characteristically tight-lipped about its distribution plans.