Apple Sits Out This Emmy Season, but Get Ready for a Frenzy of Contenders in 2020 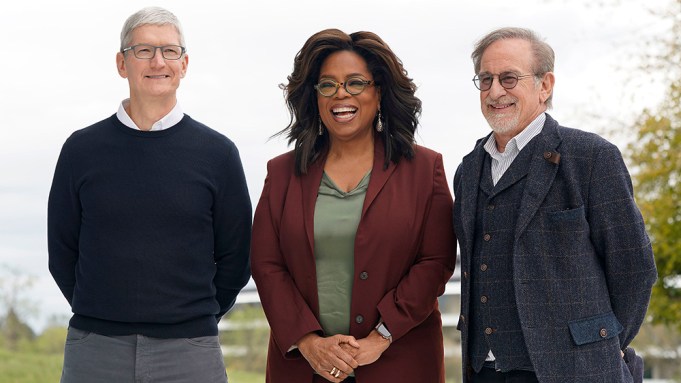 Apple won’t be entering the Emmy race this year — but get ready for 2020. The tech giant’s not-so-surprise launch of its new Apple TV+ video service on Monday included a hefty roster of top producing and acting talent that will immediately make the service an awards contender when it launches in the fall.

That means Apple’s first major awards at-bats will be the Golden Globes and various guild kudos (such as the SAG and WGA awards). Those events will serve as a warm-up for Apple’s inaugural Emmy campaign season next spring.

It won’t be Apple’s first time in contention, however. Apple Music’s “Carpool Karaoke” won the Emmy last year for Outstanding Short Form Variety Series at the Creative Arts Emmy Awards, and the show is back in the race again this year. And the company has also won several technical/engineering Emmys over the years, including one in 2017 for incorporating its Siri functionality into Apple TV.

But this is a whole new world for the Apple TV+ unit run by Zack Van Amburg and Jamie Erlicht, who have been busy over the past two years stockpiling high-profile series such as Steven Spielberg’s “Amazing Stories,” Reese Witherspoon and Jennifer Aniston’s “The Morning Show,” Jason Momoa and Alfre Woodard’s “See,” and Kumail Nanjiani and Emily V. Gordon’s “Little America.”

Van Amburg and Erlicht announced that these series will start launching in the fall. Others spotlighted at Monday’s Apple event included J.J. Abrams’ and Sara Bareilles’ “Little Voices.”

Until Monday’s announcement, when the tech giant finally revealed details behind the launch of its video service, Apple had been tight-lipped on its plans — including whether it would even be a part of this year’s Emmy race. It turns out it won’t, but there have been plenty of hints that it has awards on its mind: The company recruited publicity execs from competitors such as ABC to focus on awards strategy, for example.

But the late March reveal of its plans meant that Apple would have been late to this year’s Emmy party. The Television Academy held its “For Your Consideration” lottery in January, which means that Apple didn’t get a chance to book dates to hold officially sanctioned campaign screenings. And because Apple’s plans were kept under wraps until this week, its awards execs wouldn’t have been able to book ad campaigns until now — when most of the most valuable real estate has already been taken.

The decision to wait until fall for launch also means Apple won’t have to face off against an already crowded Emmy field, with “Game of Thrones” expected to dominate drama, and “Veep” and “The Marvelous Mrs. Maisel” facing off in comedy.

While streaming behemoths like Netflix and Amazon duke it out, Apple will wait until next year to really play the game. For now, the novelty of Apple as a TV programmer may be its strongest asset.

Apple will enter next year’s race, however, will all guns blazing — a marked difference from how streaming services like Netflix and Amazon first dipped their toes in the awards water. Netflix’s first series, “Lilyhammer,” premiered in 2012 — but it wasn’t until 2013, upon the launch of “House of Cards,” that it became a real Emmy player. Amazon’s first major series was “Alpha House,” but the service’s Emmy glory came later — eventually making history with shows like “Transparent” and “The Marvelous Mrs. Maisel.”

In announcing its subscription programming service, Apple CEO Tim Cook made it clear his ambitions were larger than awards: “Apple has always tried to make the world a better place,” he said. “We believe in the power of creativity … because great stories can change the world. We feel we can contribute something important to culture and our society.”

But nonetheless, awards will be an important barometer to judge the success of Apple’s strategy. As Silicon Valley takes on the Emmy economy, it brings the same fat checkbooks that have also upended the programming game — and Apple is expected to be no exception.