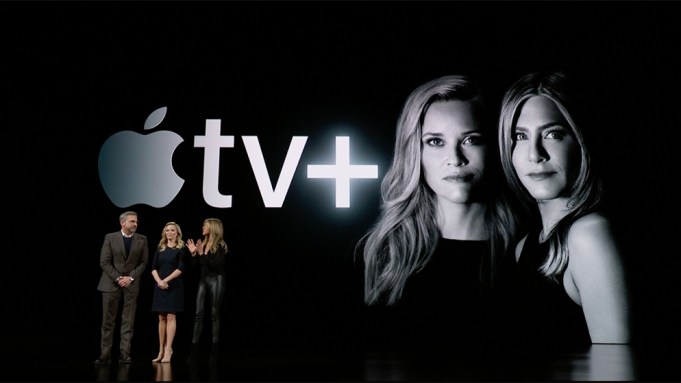 At a special event in Cupertino, Apple unveiled its Apple TV+ streaming service, and with it a short clip of some footage from its slate of upcoming original shows.

One of the main originals teased was “The Morning Show,” a series which “offers an inside look at the lives of the people who help America wake up in the morning.” The show stars Jennifer Aniston and Steve Carell in the lead roles. The teaser clip showed Aniston striding confidently towards the camera, Carell with his head bowed, and Witherspoon stepping into the late night set.

Carrell described his character as “very bold” and “dynamic” during the announcement.

“See’ takes place in a world in which the world was devastated by a virus, and the few survivors were made blind.

The clip also teased footage from “Dickinson,” which tells Emily Dickinson’s coming-of-age story about her fight to find her voice. The show stars Hailee Steinfeld, who is seen crying at a dinner table in period costume in the teaser, as the titular author. Jane Krakowski and Matt Lauria also star.

Additionally, the teaser clip showed footage from “For All Mankind.” The space drama series, which hails from “Outlander” showrunner Ron Moore, is set in an alternative timeline where the space race never ended. Joel Kinnaman toplines the show, and the clip showed a spacecraft making a rapid, disruptive landing on the surface of the Moon.