Everything We Learned From Today’s Apple Event 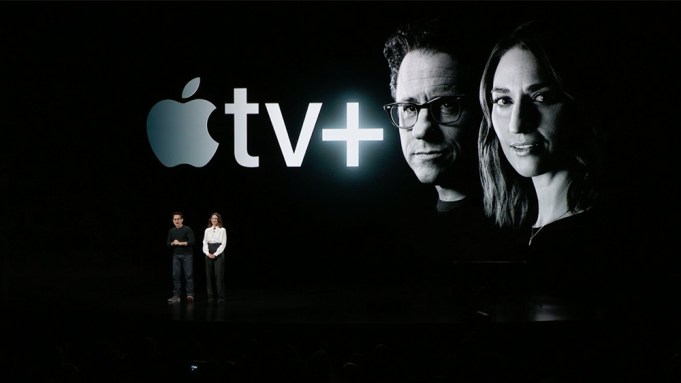 Cook, along with heads of worldwide video programming Zack Van Amburg and Jamie Erlicht, and a whole group of Apple’s creative talents, presented the company’s new Apple TV+ streaming service, which is slated to launch in fall 2019.

With so much information to digest, here’s what we learned from this morning’s big announcement:

Adding a “+” makes a big difference

It was hardly a secret that Apple planned to announce their streaming service at Monday’s event, however, what remained speculation was what the service would look like and what it would be called. In what feels like a retaliatory chess maneuver to counter the Mouse House’s upcoming Disney+ streaming service, Cook announced that Apple’s platform will be called Apple TV+. In terms of interface, the service will feature “watch now,” “movies,” and “TV shows” tabs at the top of its homepage and, in a similar fashion to Netflix, a trailer for a main show or movie will play in the center of the screen.

Apple’s army of content makers is on the march … slowly

The company brought several key generals from its army of content makers onto the stage to talk about their projects at Monday’s announcement. Steven Spielberg discussed his “Amazing Stories” reboot, Jennifer Aniston and Reese Witherspoon talked about “The Morning Show,” Jason Momoa and Alfre Woodard teased their world-building drama “See,” and Kumail Nanjiani discussed bringing a “focus on immigrants doing everyday life stuff” in his anthology series “Little America.” They all gave short presentations, however, and none of them went beyond offering background information for their shows. While some original footage from the Apple TV+ slate was briefly teased, given the “sometime in fall” date for the launch of the service, it’s going to be a while until we see any of Apple’s original content in full.

A bunch of streamers and cablers are bundled in

In addition to its host of original offerings, Apple is throwing a service called Apple TV Channels, which will aggregate channels and services that customers subscribe to, into the mix. Some of the partners who will be featured on the new service include Spectrum, DirecTV, Optimum, Playstation, and Amazon Prime Video. Several prominent cablers, including HBO, Showtime, and Starz, will also be accessible via the Apple TV app.

Oprah wants everyone to read more

The morning’s presentation was bookended by Oprah Winfrey, who announced she is working on two documentaries, to be released on the new streaming platform. One will deal with mental health, and the other, titled “Toxic Labor,” will shine a light on workplace harassment. Winfrey also announced plans to build “the biggest, most vibrant, most stimulating book club on the planet,” by broadcasting live streams with prominent authors directly to Apple TV+.

Apple News is getting a revamp

Apple TV isn’t the only service that’s having a “+” added to it. Cook revealed that Apple News is expanding its services to include a $9.99-per-month subscription service that will allow users access to a whole host of different magazines, including Variety, as well as the Los Angeles Times and Esquire. The service will shockingly be called Apple News+, however, it remains to be seen how the deal will work out with some of those outlets, given that, for example, the Wall Street Journal subscription is currently worth $15.60 per month, and a subscription to the LA Times currently costs $8 per month.

Apple is jumping into the gaming business, too

As well as original film and TV content, Apple is throwing itself into original video games through its new Apple Arcade service. With a single subscription, users will get access to more than 100 new and exclusive games. The service will launch this fall, with pricing details to be announced at a later date.

Apple is trying to reinvent the credit card

Another big announcement of Apple’s “Show Time” event was Apple Card, a new form of digital credit card that attempts to tackle some of the worst aspects of credit card-ownership through “lower interest rates, simpler applications, no fees, and better rewards.” Users will be able to sign up for a card, which comes in a physical copy, too, through the Apple Wallet app.