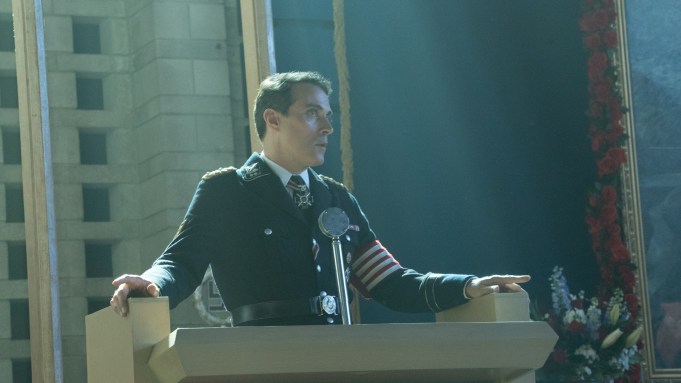 “The Man in the High Castle” is coming to an end.

Amazon Prime Video said Tuesday that the dystopian alt-history series will end with its fourth season, which will premiere in the fall.

“It has been a great privilege to work alongside our extraordinary ‘High Castle’ team, in partnership with David Zucker and Scott Free, to bring my father’s classic novel to life, particularly during this tumultuous period in our real world. I believe fans will be thrilled and satisfied by the epic conclusion we have in store for them,” said executive producer Isa Dick Hackett.

Dick Hackett is the daughter of science fiction novelist Philip K. Dick, author of the book on which the series is based. She recently inked a first-look deal with Amazon Studios under her Electric Shepherd Productions to develop and produce new Prime Original series for Prime Video.

The final season, according to Amazon Studios, will be “rocked by war and revolution,” as the Resistance transforms into a rebellion. Starring Alexa Davalos, Joel De La Fuente, Brennan Brown, Chela Horsdal, Jason O’Mara and Rufus Sewell, the streaming service said that “High Castle” became its most-viewed original series on the platform after its 2015 debut.

“We are incredibly proud of all of the hard work from the massively talented executive producers, cast, crew, and everyone who has worked on The Man in the High Castle over the years,” said Amazon Studios chief Jennifer Salke. “With production ongoing on our fourth and final season, we can’t wait for fans to see how this final chapter in the story unfolds. ‘The Man in the High Castle’ helped define Amazon Prime Video in the genre space, and we are grateful and excited that we’ll continue to be in business with Isa and Electric Shepherd Productions for future Philip K. Dick adaptations.”

“High Castle” is not the only Amazon series to end this season. “Transparent” will exit with a musical movie finale later in 2019.