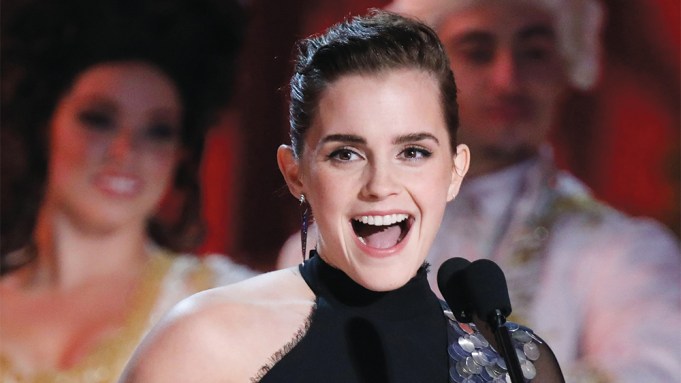 As TV and storytelling continue to evolve, does it still make sense to silo male and female performers into separate Emmy categories? Splitting up “outstanding actor” and “outstanding actress” awards as if they’re different skill sets seems like an outdated practice — yet combining them, and eliminating half of the key acting Emmys in the process, would likely be a nonstarter in a business hungry for more, rather than fewer, accolades.

And the conversation about whether gender-inclusive categories still make sense kicked into high gear in 2017, when MTV undertook several major revamps to its movie awards show. Most noticeably, the cable network added TV to the mix, turning it into the MTV Movie & TV Awards. But it also made waves by dropping gender-specific categories — something it has also started doing with its signature Video Music Awards show.

That year, Emma Watson became the first to win a gender-neutral MTV award for best movie performance, and she praised the decision to merge actor and actress categories into one. “With acting, you put yourself in someone else’s shoes,” she said while accepting her award. “The only distinction should be between each outstanding performance.”

And why not? Great acting is great acting, regardless of gender. It’s taken a long time, but TV is now offering juicy, big lead roles for women — perhaps making the need to distinguish male roles from female roles on awards shows a bit obsolete.

Indeed, three years in, MTV has been mostly lauded for dropping the distinction between “actor” and “actress.” “After we did it, it seemed like such an easy decision, and it was kind of like a no-brainer,” MTV live events vice president Vanessa Whitewolf told me earlier this year.

Merging the categories also seems appropriate in a world finally accepting the notion that gender itself can be a fluid construct. Two years ago, “Billions” star Asia Kate Dillon, the first gender nonbinary performer to play a nonbinary character on a major TV show, asked the TV Academy to clarify its gender distinctions.

Dillon ultimately entered in the supporting actor category, and although they haven’t been given an Emmy nomination yet, the performer has been nominated as best supporting actor in a drama series for two consecutive years at the Critics’ Choice Awards.

Early concerns about combining the actor and actress categories focused on whether women might be shut out. But if this year’s MTV and TCA nominations are any indication, it’s women who are dominating the competition (perhaps giving male actors some pause). The TCA drama category includes just one male, Billy Porter, up against Amy Adams, Patricia Arquette, Christine Baranski, Michelle Williams and Jodie Comer; in comedy, Bill Hader is the lone male up against Pamela Adlon, Julia Louis-Dreyfus, Natasha Lyonne, Catherine O’Hara and Phoebe Waller-Bridge.

As has been pointed out by others, awards such as the Pulitzer and the Nobel aren’t distinguished by gender. And in Hollywood, craft awards aren’t separated that way. Even the Emmys don’t sort certain performance categories, including reality/competition host and character voiceover, in that manner. In an industry still lagging in pay parity and equal representation behind the lens, stripping the gender classifications from performance categories would send a strong message to all of Hollywood.