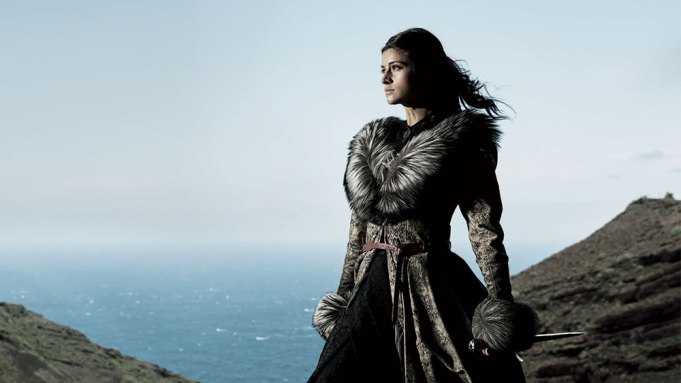 Netflix has released the trailer for its hotly anticipated eight-episode series “The Witcher,” which the streaming giant will drop Dec. 20. The fantasy- and magic-laden show stars Henry Cavill as monster hunter Geralt of Rivia, Freya Allan as the young princess Ciri, and Anya Chalotra as sorceress Yennefer.

Can you tell me how you set up the narrative for the first season?

For me the overall theme of the books, as I read them, was really about this broken family at the center of it, which is Geralt of Rivia, Ciri and Yennefer. They are tied together by destiny; they are all orphans in the world, kind of loners. None of them feel they quite belong. Certainly none of them feel they need anyone else to survive.

“The Witcher” is being called Netflix’s answer to “Game of Thrones.” Could you tell me some of the key aspects where they are different?

When people ask me, “Is it going to be the next ‘Game of Thrones’?”, I think: “Well, I hope it’s that successful!” I want nothing more than for “The Witcher” to run season after season and have a huge following. That being said. I think that’s kind of where the comparisons end. One of the fun things we have on “The Witcher” is it’s not based in any [specific] historical time. Most fantasy is thought of as kind of medieval…But “The Witcher” takes place in sort of an unknown time and an unknown place.

The other big thing story-wise where we differ…is that we are diving into the mystical a lot more. There’s magic and there’s monsters…I think for a long time television didn’t have a budget to really deal with monsters. Because it’s a really clever blend of prosthetics and also CG. And this was something that was really reserved for feature films. Gut Geralt is a monster hunter, so we can’t have a series without monsters…

The other thing is magic. My kids are huge fans of Harry Potter, and magic is a great part of fantasy. There is a fantasy fulfillment of getting to do anything you want to do just by the power that’s coming out of your fingers or your mind. But “The Witcher” isn’t that kind of black-and-white world. One of the things that we built in is: What is the cost of magic? If you’re going to practice magic you’re going to lose something as well….It forces our characters into places where they have to use their brains a lot more than sort of relying on magical tools.

Will there be nudity and sexuality in the series?

Absolutely. “The Witcher” is a show for adults….With television pushing more into premium cable and now into streaming, you can say almost anything, you can see almost anything, you can do almost anything. The interesting [thing] to me is not relying on that as a crutch. Audiences are really savvy. They don’t need to be shocked. They are looking to enjoy a good story. So whenever I approach sexuality, intimacy between characters, or nudity, to me it’s about: Does this do anything for our story? And does this do anything for our character? Are we looking to have a character be more vulnerable in this moment? Are we looking to bring two characters together to have sex because they love each other and are about to change the direction of each other’s lives? I always go back to story and character, and if it doesn’t  have anything to do with those we don’t need it.

Can you talk to me about your choice of directors: Alik Sakharov (“Game of Thrones”), Alex Garcia Lopez (“Daredevil”), Charlotte Brandstrom (“The Man in The High Castle”), Marc Jobst (“Daredevil”).

What I was looking for was an understanding of fantasy and an understanding of horror. Those were the two big things. And horror kind of came in as an unexpected thing…I needed people who were in love with this genre and who weren’t afraid to press boundaries and to not rely on standard coverage…But really, for me, the biggest thing was their ability to work with the actors. Even if you take the bells and whistles away, if you take the magic and the violence and the sex and the blood [away], then you have three really broken people. And to me the directors had to be able to get in and work with Henry and to work with Anya and Freya and take all the fancy costumes, all that away, and just deal with them as humans who are scared and trying to find their way through the world.

You’ve already talked about the casting of Henry Cavill and how you had his voice in your head while writing the scripts. Can you talk to me about casting the female leads?

Anya is actually the first person that we cast, as Yennefer. It’s a really difficult role because we are asking someone to encapsulate a young teenager who is uncomfortable in her body and with her life and with her family and feels that she is not enough and has never been enough. And then we’re asking her to grow and develop and mature by decades on camera and suddenly come in as this powerful magician who still is flawed and vulnerable inside, but is doing everything to cover it up. It’s a lot to ask of a actor. When we were reading Anya, we actually delved into her childhood. That was the thing I wanted to start with, and to see if this person could portray someone so broken.

With Freya, we’d actually cast her as another character in the pilot, a very small character….We had cast her, and we couldn’t find our Ciri….Then Sophie Holland, our casting director, called me up and said: “Don’t hate me, we’ve already signed this paperwork, but would you be willing to read Freya as Ciri?” And I flew to London and met Freya and we cast her that same day.