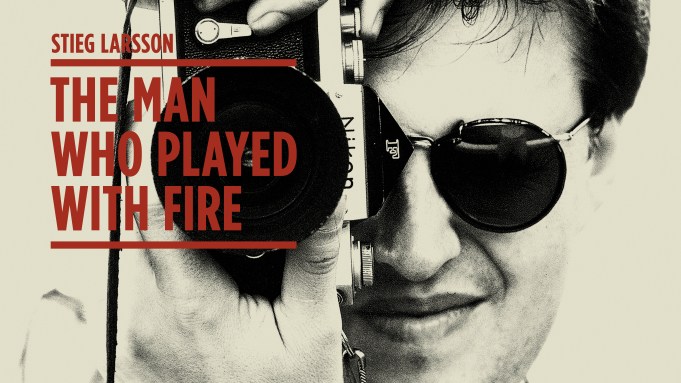 “Stieg Larsson: The Man Who Played With Fire” is the latest documentary feature from famed Swedish TV director Henrik Georgsson, and tells the story of the life and work of Swedish journalist and author Stieg Larsson, best known for his “Millennium” book series featuring journalist Mikael Blomqvist and punk-rock hacker Lisbeth Salander.

The film’s sales agent, The Match Factory, has shared an exclusive look at the first trailer for the film, set for its world premiere at Sundance later this month.

Georgsson is best known as a director of the internationally celebrated Swedish-Danish TV-series “The Bridge,” often credited as a foundation stone of the recent golden age of Scandinavian Noir. He has also directed other popular series such as “Wallander” and “Blue Eyes,” and recently wrapped on the British Nordic-noir-style series “Marcella,” broadcast on ITV and Netflix.

The trailer for the new documentary follows a similar formula to the film itself, first referencing the three novels which made Larsson a household name in the early 2000’s. They are quickly pushed to the side however, and the focus shifts to the man himself, and the career that consumed him for decades before the “Millennium” books were even an idea. Dimly-lit, smoke-filled scenes follow which chronicle his time working in graphic design, the founding of the anti-racist magazine Expo, and the workaholic lifestyle that pushed him to an early death of heart failure in 2004. He was only 50 years old.

“We could use him now,” Georgsson told Variety. “He would be a strong voice, especially since the success of the books. He would have had a lot of money, and he really would get things done. He wasn’t the kind to just retire or something like that.”

Born in 1954, Larsson grew up in Northern Sweden, in a cabin that he would eventually return to later in life and purchase as a vacation home. He obsessively pursued independent research into right-wing extremism in Sweden which resulted in an earlier non-fiction book, “The Extreme Right.” He was one of the world’s leading experts on neo-fascist movements near the end of the 20th century and into the 21st.

While fans of the books will surely be one demographic in the audience for the documentary, according to Georgsson, “We made the film most for young people who were kids in the ‘80s and ‘90s; to enlighten them about this history and the connection all the way back to the fascist movements of the ‘30s.”

And, while Larsson’s books and the resulting films are a standout symbol of the early 2000’s, it’s his earlier work that might resonate with younger audiences struggling to wrap their head around the surge in far-right political movements.

“Stieg Larsson: The Man Who Played With Fire” was produced by B-Reel Films Production in co-production with pay TV operator TV4 Film/C More Entertainment, which will also broadcast the film as a four-part miniseries. The Match Factory will be looking to capitalize on the Sundance screenings to secure international sales along with Cinetic which is co-repping sales in the U.S.