MADRID  —  Scheduled to bow in 2021, Movistar Plus’ Original Series “Antidisturbios,” from Spain’s Academy Award-nominated Rodrigo Sorogoyen (“May God Save Us,” “The Realm” “Mother”), is shaping up as one of the flagship titles on the slate of Telefonica-owned Movistar Plus, Spain’s biggest pay TV player, as well as proving indicative of deeper industry and artistic trends.

Co-written by Sorogoyen, Eduardo Villanueva and Isabel Peña – co-scribe of all Sorogoyen’s features and arguably one of the most overlooked female talents in Spain – and unveiled via a Madrid press set-visit last week, “Antidisturbios” begins focusing squarely on six members of Furgón 93, part of Spain’s Police Intervention Unit, its National Police Corps riot police. The squad is drafted in to carry out an eviction in the heart of a Senegalese community in Madrid. Captured in Ep. 1, their operation, however, goes drastically awry.

Making his solo feature debut with 2013’s “Stockholm,” few directors have consolidated so fast as the 38-year-old Sorogoyen not just in Spain but in Europe as a top director of its younger generation.

His third feature, “The Realm” was already structured as a top-level Spanish-French co-production, produced out of Spain by Oscar-winning Tornasol Films (“The Secret in Their Eyes”) and out of France by two its film industry’s senior figures: Jean Labadie and Stéphane Sorlat.

A Movistar Plus Original series produced with Caballo Films and Sofía Fábregas’ “The Lab,” “Antidisturbios” marks, however, Sorogoyen’s first full series as a creator. Reams have been written from an industrial standpoint, about the film industry’s disembarking into drama series, less how that can benefit TV production in practical terms. From comments made by Sorogoyen and Fábregas, “Antidisturbios” looks like a large case in point. In it, Sorogoyen enrolls the full force of his auteurist interests and creativity, channeled into a major TV production.

Few young European directors have played so well, for example, with point of view, shooting one reality, only to expose another.

In “May God Save Us,” Sorogoyen explored the world of two troubled detectives, then that of a hauntingly brutal killer. “Antidisturbios” changes perspectives, literally and figuratively, time and again. Recording a street riot, Ep. 1 is shot with an in-your-face, hand-held camera, and near documentary style, Sorogoyen said. From Ep.2, however, he changes optics, uses wider lenses. Ep. 1 has no Steadycam work, Ep. 6 is  almost all Steadycam-shot.

Ep. 1 shows the riot police in action, played by Raúl Arévalo, Roberto Álamo, Hovik Keuchkerian, Álex García, Raúl Prieto y Patrick Criado. A scene shot by Sorogoyen during the press visit portrays a world of men, their testosterone-fueled camaraderie. the six riot police singing the Tesón de Hierro, the hymn of Spain’s National Police Corps, as one is regaled with the blood-stained scarf of a Spanish soccer ultra, to general jubilation.

One of the series’ real focuses, however, is “how state employees have to battle day in day out with social violence and how they take that home with them,” said Fabregas, a development and  production executive for nine years at Atresmedia Cine.

Yet as “Antidisturbios” broadens out, plumbing the men’s lives with their wives and children, it changes point of view once again as Furgón 93 is confronted by a new reality which is doubly disconcerting: an Internal Affairs probe, given their actions in Ep. 1, which to boot is led by a women, Inspector Laia Urquijo (Vicky Luengo).

“One thing I like a lot about the plot is that little by little, subtly, I hope, she gains ground, protagonism, until she becomes the protagonist of Ep. 6,” said Sorogoyen.

Urquijo begins her investigation “thinking that the only way to get to the truth is by following established rules,” said actress Vicky Luengo, who plays Urquijo, during the set visit. Yet, in a double reversal of point of view, she ends up “questioning whether issues are so cut-and-dry and truth, justice, so crystal clear” and exposing a far more complex web of corruption than just one act of bad policing.

Equally, few Spanish directors employ such virtuoso camerawork to capture mood, character, and sense of authenticity. “The Realm”·began with a 1 minute, 45 second tracking shot to building electronic pulse music on the soundtrack which nails the swagger of its protagonist, a regional party vice secretary on the make.

On the night after the set-visit, Sorogoyen shot a 17-script page-sequence shot for Ep. 6 with six of the series’ main actors.

“With Rodrigo, everything has to be authentic, his cinematographic language and direction of actors, “ said Fábregas.

Sorogoyen used VFX as little as possible, favoring the real to the digital, she added.  Riot scenes were shot on the locations where the protests which inspired them took place, such as one where a man had died of a heart-attack, allegedly due to police violence.

Sorogoyen insisted actors playing the police were in good physical shape, so they could run like riot police. He hired a member of Spain’s UIP to advise on how to carry the shields, don the helmets.

A thriller, with a social edge, propulsive action scenes and character studies, “Antidisturbios” also forms part of a second wave of Original Series from Spain’s Movistar Plus, forged after Telfonica’s pay TV unit in Spain had seen what had worked, and as competition is sky-rocketing in Spain for audience attention.

“Our goal is to create fictions that are distinctive and ‘make a splash,’” Movistar Plus president Sergio Oslé said this September.

He adds: “So we’re increasingly keen on making our titles ‘events.’ It is the only way they can make a difference in a market that is overflowing with nearly unlimited offerings.”

That can cut two ways, Oslé argued: “Betting on ‘banner,’ must-see shows” – “The Plague,” Alejandro Amenabar’s first series, “Tell Me Who I Am” – or on “smaller shows that are very unique –  Leticia’s Dolera’s “Vida perfecta” or “Hierro” are prime examples.”

“Antidisturbios” clearly belongs to the former category. It boasts social relevance, turns on a form of policing increasingly under public scrutiny after riots in Chile and mass demonstrations in Catalonia. It kicks in with action, then drills down on character, not the other way round.

A step-up in scale for Sorogoyen, it shot, moreover, on over 170 locations, mostly exteriors, in Spain’s La Coruña and Madrid, including the streets of its city centre, using “hundreds” of specialists and extras, Fabregas said.

“Antidisturbios” also exploits the innate story-telling advantage of series. “Films are slaves of plot. You can [only] show the personal life of two or three characters,” Sorogoyen argued. In contrast, in “Antidisturbios,” “we explore the lives of seven people, and drive deeper into them. It makes it more human than ‘May God Save Us’ or ‘The Realm.’”

That human depth is not dramatic downtime, but the major attraction of some of Europe’s most arresting series of this year, from Shane Meadows’ “The Virtues” to Rebecca Zlotowski’s “Savages” or Justin Webster’s “The Prosecutor, the President and the Spy.” 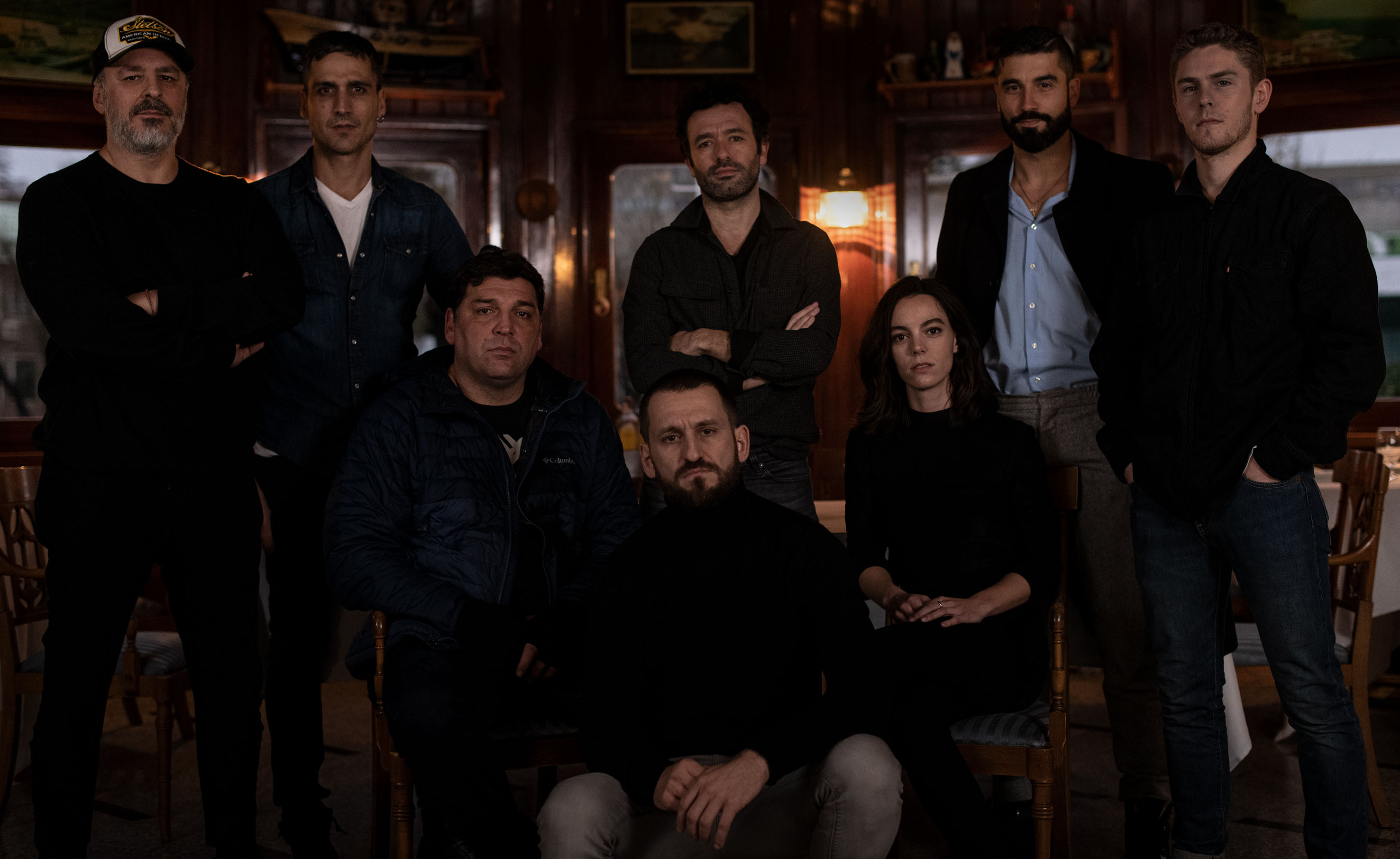