‘DC Super Hero Girls’ Shows Girls As They Really Are, But With Superpowers 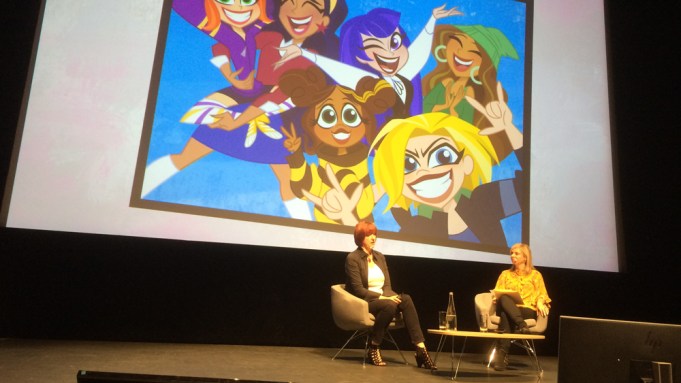 Lauren Faust, the executive producer of Warner Bros. Animation’s rebooted “DC Super Hero Girls,” is on a mission: to right the wrongs committed by past series for girls.

“Too many shows for girls are less about inspiring them, less about entertaining them, less about reflecting their experiences back to them, and too often almost come across as lectures on how we expect girls to behave,” she told an industry audience at Cannes’ trade show MipJunior Saturday, as she discussed her animated show, which airs on Cartoon Network.

“That’s why [the female characters] end up being very soft, and very nice, and everybody’s very concerned about everybody else’s feelings all the time, and that is important to a degree, but is it really exciting to watch?”

That line of thought informs the overall tone for the show, which “sets us apart,” she said. “Make sure that it’s funny, make sure it’s cool; appeal to girls with the cuteness and the silliness.”

Rather than being “perfect angels,” the girls in her show are shown “just being idiots” and “they mess up.” Added to that these girls aren’t afraid to get into a physical fight, and the stakes are high, with the heroes suffering cuts and bruises. “In a lot of girls’ shows they are too afraid that girls can’t handle that, and I don’t know where that came from. It is so much more fun and so much more interesting when there are real stakes. And it is so much more rewarding when the heroes win when they almost lost.”

There are a lot of women working on the show. Most of the character design team, most of the storyboard team, and most of the directors are women. “These young women are able to bring their own experiences and feelings to these stories,” she said.

Her advice to male writers who ask how to write female characters is “don’t… just write people. Write people you know, write how you feel, write your experiences, and then just make the character female.”

A more realistic approach to the portrayal of female characters has started to be seen in TV. “We are seeing less and less of ‘girls like shopping, and makeup, and talking on the phone a lot.’ We are seeing more and more female characters across animation and live action that have more depth because we are giving them the gamut of human emotions, not just what we think is exclusive to girls and women.”

Faust likes to weave “lessons and morals” into her stories. “It is important because that makes stories resonate. The thing is if kids can tell you are doing that they don’t want to watch it. So you have to bake the lesson into the story by making your audience care about your characters, be interested in your characters.

The show is rooted in the day-to-day experience of ordinary teenagers. Many teen superhero shows take the typical superhero story – a bad guy doing wrong and the superhero saving the day – and then ask: How would a teenager approach the superhero role? Faust flipped that on its head. She started by looking at the life lessons teens had to learn and typical coming-of-age stories, and then “put a superhero spin on that.”

While Faust started from scratch with “DC Super Hero Girls,” she drew on the tone, humor and characterization of her series of shorts “Super Best Friends Forever.” The first version of “DC Super Hero Girls” was about “teenage characters going to a high school to learn how to be superheroes.” In her version, Faust wanted to bring back “the idea of secret identities.” “The girls have a regular teenager life, they go to a regular school, and they are superheroes at night when they need to fight crimes,” Faust said.

She wanted the stories to resonate with kids and teenagers, and “reflect back experiences they have themselves,” and so she grounded the characters of the superheroes in real life. Wonder Woman, for example, is perfect – strong, disciplined and intelligent; in the series, as Diana Prince, she is the valedictorian – she gets straight As and is the most popular girl in school. But to make her relatable, and inject some humor, she also has some flaws. As she grew up on Themyscira, she can’t use a phone, she can’t drive a car, and she can’t use slang. She’s also not used to being around boys, and develops a crush on Steve Trevor. “We bring in this relatable, fish out of water aspect to her,” Faust said.

Supergirl is “the muscle” – “she’s all about strength; she punches first, asks questions later,” Faust said. But, in the show, as the teenager Kara Danvers, she has “a little bit of a temper, so we made her a rebel.” She also has a “chip on her shoulder” because Superman is famous and she isn’t.

Other characters include Batgirl, who is a fangirl, a huge fan of Batman; Bumblebee, who is the rookie and shy, but also brave, striving to better herself; Zatanna, the magician, who is very fashion conscious and a showoff; and Green Lantern, the protector, who is an activist, a pacifist, and a vegan.

The MipJunior session was moderated by Kristin Brzoznowski, executive editor of World Screen and TV Kids.