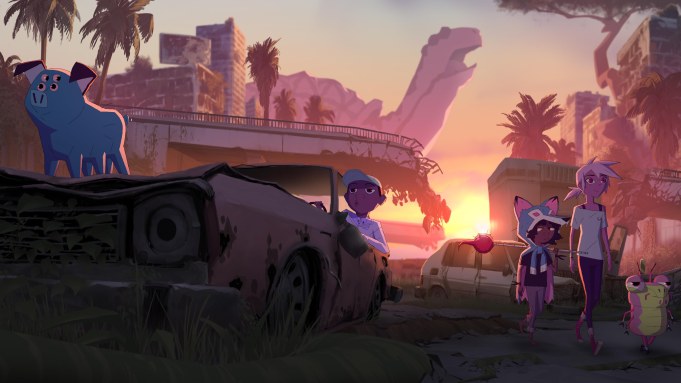 ANNECY, France  —  DreamWorks Animation Television will produce “Kipo and the Age of Wonderbeasts” a fantastical comedy adventure and coming of age tale created by Radford Sechrist (“How to Train Your Dragon 2”), and developed for TV by Bill Wolkoff (“Once Upon a Time”).Voice starring Karen Fukuhara (“She-Ra and the Princesses of Power”), “Kipo” will be made available on Netflix in 2020.

“Kipo” was announced at a DWA TV presentation in Annecy on Thursday which also revealed a full title for the studio’s upcoming “Fast & Furious” TV series – “Fast & Furious: Spy Racers” and teased a stylish test and trailer for the spin-off. DWA TV released “Kipo” and “Spy Racers” teaser trailers soon after the event.

Also on the presentation’s panel was “She-Ra and the Princesses of Power” Noelle Stevenson, talking about Upcoming Season 3. The presence of two young animators, both graphic novel creators and, in Sechrist’s case, a former storyboard artist, sums up a sense of young energy and new direction as DWA TV drives increasingly into original shows.

Written by showrunner Sechrist, scheduled for release on Netflix in 2020, and set on a fantastical post-apocalyptic Earth, “Kipo” turns on a young happy-go-lucky girl Kipo, a surrogate for the spectator, who has spent her whole life living in a gigantic burrow. Thrown out onto the surface, she joins a ragtag group of survivors as they embark on a journey with Kipo trying to reunite with her family as she travels through a vibrant wonderland of Godzilla-size mutant animals and birds which may look gorgeous but try to kill her.

A trailer sneak-peeked in exclusivity for the Annecy audience kicks off with Kipo on the surface, which is sometimes shrouded in a wane spectral purple smog, befriending a six-legged, four-eyed pig which is like a puppy dog, and a girl, Wolf, a badass surface survivor loner, “like a Mad Max put into a 10-year-old’s body,” Sechrist said to laughs at the DWA TV panel.

“Kipo” is set in “Los Vistas, a fake version of Los Angeles, has the culture of L.A. when it comes to the series’ much-present hip hop and indie rock music or indeed its scooter skunks, glam-rock hamsters and fitness racoons.

“I wanted to do a fun apocalypse. Also, I’m a lover of anime, its painterly style. I was told ‘You can’t do that in TV,’” said Sechrist. But he has.

Bret Haaland (“All Hail King Julien”) serves with Hedrick as an executive producer and showrunner. The series is also executive produced by Vin Diesel and Chris Morgan, producers on the live-action “Fast & Furious” franchise.

It turns on teen Tony Toretto who follows in the footsteps of cousin Dom when he and his friends are recruited by a government agency to infiltrate an elite racing league – serving as a front for a nefarious crime organization bent on world domination, the synopsis runs.

How can we turn an action franchise into an animation show and not lose something in the process? Hedrick  asked at Annecy. His answer was by introducing fun elements, and going back to the series origins and development, and shooting with an ultra-attention to sound and realistic camerawork.

Hedrick showed off the cars, such as Tony’s “Toretto muscle car,” as Hedrick put it, friend’s Cisco monster truck, and the Japanese inspired car of Layla, a girl they meet.

“The DreamWorks team has done an insane job building the cars. We really want them to be able to interact with their various environments, we have races that go through the desert, and up the mountains, and all over the place,” Hedrick told Variety.

“We want spectators to get that kind of adrenaline they get watching the live action films,” he added.

The first race will be through tunnels under L.A., Hedrick said. Series in set in a lush and beautified L.A, with dramatic sunsets, street artistry and an extraordinary lair where the kids hang out.

Hedrick sneak-peeked a test sequence of a car’s interacting with environment, here a desert as it slides across the sand. Cinematography in another sequence has, in hyper realism,  water splashing up onto the camera lens and a car moving out of focus as if the camera can’t keep up with its speed.

The studio focus also took in an update by Noelle Stevenson of the critically-acclaimed Netflix original series “She-Ra and the Princesses of Power,” which she wrote and directed, as well as the original series “Kung Fu Panda: The Paws of Destiny” made for Prime Video, which plays in competition in the TV Films category at the Annecy Festival.

How did you tackle a show 30 years old”? asked Peter Gal, DreamWorks Animation’s chief creative officer, TV, of “She-Ra.” Stevenson answered that she watched a lot of episodes, lined up the characters and was enthused. “How often do you get to re-invent a property which is sci-fi fantasy, has flying unicorns and the leads are all women with superpowers?” Stevenson enthused.

She also loved “the glam ‘80s look” of the original series, and looked to artists such as Moebius for inspiration, “‘70s, ‘80s, sci-fi art, with its rich and evocative color palette.”

She wanted to show as much diversity of race, sexual orientation, and body shape, she said. “In Season 3, the intensity of these characters just keep increasing. I wanted to make a show about female empowerment, but I also wanted to suggest that being a woman is not easy, and there’s no easy solution,” Stevenson said at Annecy, showing stills of new characters such as the leader, voiced by Geena Davie, of the Crimson Waste – a desert with huge devastated mountains, the bones of prehistoric animals. Stevenson also played a punchy energetic sneak peek trailer of Season 3.

Executive producer Lane Lueras screened the trailer for Season 2 of “Kung Fu Panda: The Paws of Destiny,” which bows July 5 on Prime Video.

Lueras also provided a sneak peek animation test of the recently announced Netflix original series, “Jurassic World: Camp Cretaceous,” debuting globally on Netflix in 2020. The hyper-realist immersive 20-second shot has a dinosaur turn on the camera and run towards it in discomfiting fashion.

“We built the studio on TV series based off DreamWorks feature films and some titles from our media library like ‘She-Ra,’” said Gal who helped create and build DWA TV, which has as much as 20 shows in production at any same time, and has produced the equivalent of 270 feature films in just six years to date.

Going forward, DWA TV will continue doing animation features based on its shows – like “Boss Baby” and “Spirit” . but is also “expanding into areas that are really thriving for us right now,” Gal added. One is tapping Universal live-action film IP: “Fast and Furious: Spy Racers” and “Jurassic World: Camp Cretaceous”; another way forward, “which we are going into very rapidly,” Gal said, is originals, the “first great example” being  “Kipo.”

Reasons abound for the originals push. “Me and my team just get incredibly excited by new ideas,” Gal said.

Also, “we have so many incredible artists and writers and producers and creative folks at our studio coming to us with ideas,” he added. If DWA TV doesn’t develop them, the ideas and talent would go elsewhere when talent is the root of everything, Gal told Variety.

Over 50% of shows in development or production at DWA TV are now originals, he added.