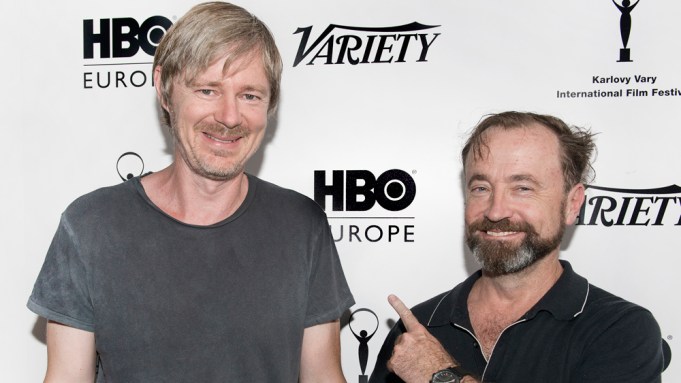 Thirty years after the Velvet Revolution that brought down the communist regime in the former Czechoslovakia, the six-part HBO Europe series “The Sleepers” captures that tumultuous time with a spy drama set behind the Iron Curtain.

Zacharias recalled the turbulent events of a year that swept away the decades-long reign of one-party rule in Czechoslovakia. “That was a big year. It was a huge change, when the communist system finally broke down,” he said.

It’s an era that’s rarely been documented on screen, noted Debruge, with “The Sleepers” offering a portrait of Czech society at a time when political intrigue meant nothing was entirely what it seemed.

Bringing that period to life took meticulous research from Zacharias and debut TV scriptwriter Ondrej Gabriel. The faithfulness to detail extended to the script, which the director insisted be written in his native language. “This has to be in Czech, because it’s a Czech story,” he said.

The show’s creators were also faced with more cosmetic challenges — perhaps none more difficult than finding suitably grimy corners of the spruced-up capital to shoot in. “Back in 1989, it was an older, decrepit-looking Prague,” said Nykl. “It’s beautiful now.”

Nykl was born in the former Czechoslovakia but left when his family fled the country after the Soviet invasion of 1968. Playing an English diplomat in the series, he described “The Sleepers” as “a series about identity, and who are you, and the potential for being more than what you appear to be.”

It’s a theme that resonates with an actor best known for sci-fi and superhero roles. “This is new. This is exciting,” he said. “I think it’s also new for the Czech Republic to have an espionage drama. It’s a great genre.”

“The Sleepers” is the latest Czech series from HBO Europe, following Agnieszka Holland’s political drama “Burning Bush” and Zacharias’ “Wasteland,” which HBO rolled out across its U.S. streaming services in 2017.

With the cabler bringing a growing number of its international programs to the U.S., Zacharias said he was mindful of how the series would be received by both Czech and foreign viewers.

The director acknowledged the historical parallels to the present-day Czech Republic, which in recent weeks has seen its largest protests since the Velvet Revolution, with thousands taking to the streets to call for the resignation of Prime Minister Andrej Babis.

But while “The Sleepers” is steeped in the daily life of Czech society in the dying days of the Cold War, Nykl said the political backdrop shouldn’t make it a hard sell to foreign audiences. “I really do think that there is a universal spy thriller genre that people will recognize, and this is a really original Czech take on it.”