Behind the Business of ‘SpongeBob’s Big Birthday Blowout’ 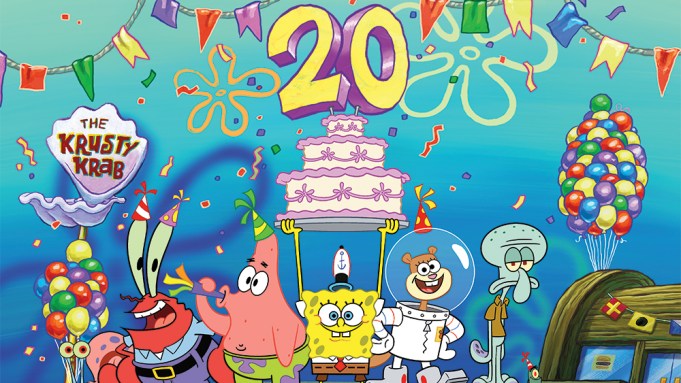 Nickelodeon’s hit “SpongeBob Square-Pants” moved out of its own adolescence earlier this year when the animated series turned 20 in May. But the celebration of the modern classic about under-the-sea adventures is continuing well into next year as a “love letter” to the show’s creator, says Ramsey Naito, Nickelodeon executive vice president of animation production and development.

“Time flies,” says Naito. “I remember meeting Stephen Hillenburg in 1998 when we were both getting coffee at a coffee machine when he was just starting.”

Hillenburg, who was a marine biology teacher before stepping into the world of animation, created “SpongeBob” based on some of his own experience seeing children’s awe at sponges and starfish. The series became Nickelodeon’s first original Saturday morning cartoon, debuting in May 1999. Hillenburg unfortunately passed away from complications from ALS in November 2018 at age 57, before getting to see his beloved series hit this milestone — festivities for which have been dubbed “Best Year Ever” and include a new one-hour, mixed animation/live action special airing July 12, as well as a third film, “The SpongeBob Movie: It’s a Wonderful Sponge,” set to hit the big screen in May 2020.

Naito says the one-hour special, titled “SpongeBob’s Big Birthday Blowout,” will be dedicated to Hillenburg: “In some ways it’s written to him from the entire cast and everyone who’s been working on this franchise.”

In the special, SpongeBob (voiced by Tom Kenny) and Patrick (Bill Fagerbakke) journey to the surface world where they encounter live-action doppelgangers of the show’s animated stars, played by the actors who have voiced the animated characters for 20 years.
Co-executive producers Marc Ceccarelli and Vincent Waller say the idea of sending SpongeBob on a tour of the surface world has been around for years, but because it is such an ambitious idea, it took some time to come to fruition.

“To do live-action mixing with animation is difficult in the television pipeline, so now that it’s the 20th anniversary we pulled it out because we knew [executives] wanted to do something special for this occasion and it’s something we wanted to do, too,” Ceccarelli says.

“SpongeBob” has mixed animation with live-action in the past — and David Hasselhoff, who appeared in 2004’s “The SpongeBob SquarePants Movie,” returns for this special — but “Big Birthday Blowout” is the first time the show’s voiceover actors appear that way. They gather for lunch at the Trusty Slab restaurant, a play on Bikini Bottom’s the Krusty Krab.

“This is definitely the first time we’ve attempted anything this ambitious on the TV series,” says Kenny. “It gives that kind of a fun, weird, meta, Easter egg moment when you get to see the voice actors working at this diner.”

Beyond the one-hour special, the new season’s episodes also cater to long-time fans to further the milestone celebration.

“We went through the history of ‘SpongeBob’ in our minds to think of characters that had been fan favorites in the past and we specifically pulled some of them out of the past and wrote stories around them,” Ceccarelli says.

Keeping all the “Best Year Ever” festivities on track is a full-time job for Charlotte Castillo, senior vice president of global franchise planning, Viacom Nickelodeon consumer products. She describes her job managing “SpongeBob” and other Nick properties as akin to that of an air traffic controller.

“Given that we have so many groups internally and so many different initiatives with ‘SpongeBob’ happening, we wanted to align on a theme that makes the most sense and tells a true story and really connects with the IP and is true to the show’s DNA,” Castillo says. “This meant his ‘best day ever’ optimism is front and center. That’s what the consumer relates to.”

Discussions of how to celebrate the 20th anniversary of “SpongeBob” began in November, says Castillo, who broke the approach into four pillars: content, products, collaborations and experiences.

In addition to “Big Birthday Bash,” content includes a dedicated “SpongeBob” YouTube channel that launched earlier this year, while on the experiential front, the show is getting an 1,800-sq.-ft. booth commemorating 20 years of the series from July 18-21 at Comic-Con Intl. in San Diego. Talent will be on-hand to sign autographs, and there will be an interactive game inside the Krusty Krab, as well as a photo opportunity at Mrs. Puff’s Boating School and costumed character appearances. The show’s cast and producers will also be featured on a panel.

Artist Romero Britto reimagined SpongeBob in his own style for a mixed-media art installation that will be exhibited in a Los Angeles pop-up experience later this year.

Nickelodeon partnered with the Pantone Color Institute to create official SpongeBob Yellow and Patrick Star Pink colors. And then there’s new merch, which includes the first-ever crossover between SpongeBob and Nickelodeon Slime.

“SpongeBob and Slime are to Nick as peanut butter is to jelly,” Castillo says. “They’re always very much a part of our DNA. With slime there’s been a recent trend of kids really connecting with it and concocting their own and we have a line of Slime toys and we thought it was a great time to do a collaboration of the best of what kids want to play with.”

“SpongeBob” products are aimed at adults, too. Nick partnered with HipDot Studios for the first premium “SpongeBob”-inspired cosmetics line.

“His demo is very broad in terms of age as well as [being] global,” Castillo says. “The thing about SpongeBob is he inspires people to be creative and makeup is all about being creative and reinventing yourself.”

And rather than grimacing over SpongeBob internet memes created by fans, Viacom execs have embraced the phenomenon, partnering with Alpha Group on viral meme-inspired vinyl figures, including Mocking SpongeBob, Imagination SpongeBob, Surprised Patrick and Handsome Squidward.

“People who are really into developing memes adopted SpongeBob as their language of choice; it’s how they communicate and express themselves,” Castillo says. “It’s really amazing how it’s transformed the connection with the consumer, and we wanted to celebrate that.”

Nickelodeon’s Naito says that connection with viewers is based on SpongeBob’s everyman qualities (“Everybody sees themselves in SpongeBob”) that have helped the show make a lasting impact.

“He’s equal parts heart, farts and smarts,” she says. “He appeals to kids and adults because he represents the better good in everybody. The success of the franchise is due to how authentic and funny the show is, the love for SpongeBob and the honest loving relationships he has with his friends.”

Ceccarelli says writing “SpongeBob” for a general audience — not specifically for children — helps keep the series funny and entertaining.

“We don’t really do a lot of teaching life lessons or moral moments that a lot of children’s television does,” he says. “I know that kind of stuff tends to push older audiences away so the fact that that stuff is not in there makes it open for everybody to enjoy together.”

The archetypal cast of characters can also be repurposed in multiple ways, which Kenny feels helps keep “SpongeBob” evergreen. “If something like ‘SpongeBob’ starts chasing trends, it’s literally dead in the water,” he says. “The characters are who they are and because they exist in this world that is not ours, it doesn’t really date ‘SpongeBob.’”

To keep “SpongeBob” going for future generations, Nickelodeon wants to build out the show’s universe. This includes the aforementioned upcoming third feature film, as well as the franchise’s first television spinoff, “Kamp Koral,” which was announced in June as a CG-animated show that follows a 10-year-old SpongeBob during his summer at sleepaway camp. Ceccarelli and Waller will executive produce and showrun the spinoff, which they think will open “a new creativity in our writers and in our artists.”

Naito says it’s clear from the Memes and the busy nature of Castillo’s schedule that consumers want more “SpongeBob.”

“In many ways, Bikini Bottom is our Marvel Universe,” Naito says. “We are looking at ways to tell stories in this universe in the same way we’re gonna do with ‘Kamp Koral,’ but it’s not without celebrating classic ‘SpongeBob’ all the time. We are definitely in discussions about how we can find other ways to mine the universe in an authentic way because it’s really important that, no matter how we’re mining this universe, we keep the core values everyone loves about ‘SpongeBob.’”