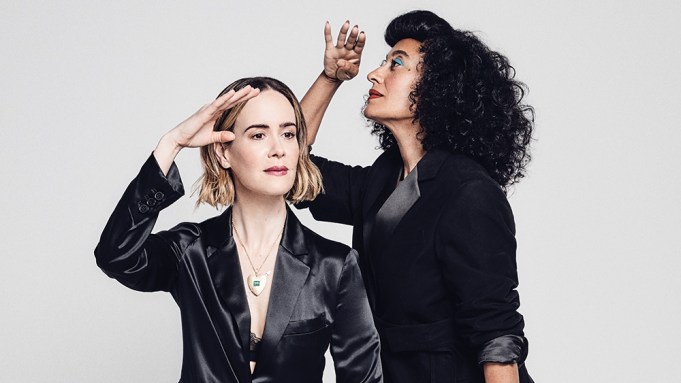 Sarah Paulson and Tracee Ellis Ross sat down for a chat for Variety’s Actors on Actors. For more, click here.

Tracee Ellis Ross continues to find new notes to play on ABC’s “Black-ish,” on which she stars as a sitcom mom with off-kilter humor and a deep backstory. On FX’s “American Horror Story: Apocalypse,” Sarah Paulson had to undergo far more literal reinventions, playing three characters who exist at the end of the world.

TRACEE ELLIS ROSS: So, my dear friend, what was it like directing “American Horror Story”?

SARAH PAULSON: It was my first time directing. That was the hardest thing I’ve ever done. I had to contend with the fact that I, by nature, am a panicker. And the one thing you don’t want in your director is watching their eyes spinning in abject fear.

TER: After the fact, how did you feel about it?

SP: I really want to do it again.

TER: What do you love about it?

SP: I love talking to the actors. And I love to try to find a way to tell a story with the camera.

TER: When I directed my second time on “Black-ish,” I wasn’t in everything. I got to feel my style emerge, and it was really exciting. I think the biggest difficulty for me is having to think about what I look like. Because as a director, I put my hands all over my face while I’m watching the monitor.

TER: They kept having to touch me up, and I was like, “This is such a waste of time.” I also found the first time I directed “Black-ish,” I did not get enough coverage of me. I went into the editing room, and I was like, “We can’t use that.”

SP: I think it’s extraordinary what “Black-ish” does in terms of where it’s willing to go.

TER: I’m really proud of it. What I really have attempted to stretch about it is, I’m not one thing. We rarely see black women who are thriving and not just surviving. We rarely see married couples that are actually in love and who enjoy and respect each other. And that drew me to the role. Did you have a chiropractor after the two-headed girl? Because you had to tilt a particular way.

SP: I watched a video of conjoined twins and how their physical bodies were relating to one another, and I thought, “Let’s not do something that looks like a split screen.” But it wasn’t great for my neck. Last year, I played three characters in one episode, which was wild. Listen, all I want is a peg leg and a black tooth in any role I play. I want to be a pirate.

TER: This is your dream? I’m not judging you.

SP: I’m 44. It didn’t really hit that moment of feeling seen until I was in my late 30s. Aging. Because I have felt more seen as I was older, it has never had a negative connotation.

SP: It’s a weird dance. Sometimes you have to combat your fears with facts. And here are the facts. I’ve been working more. I am playing complicated women. I do see it out in front of me — the landscape looks different, the stories that are being told look different. But still, I can feel it. I feel like there’s something running after me and that any minute, if I’m not careful, that door is going to close. And I don’t know how much of it is imprinted on me societally.

SP: It does feel like Father Time is breathing down my neck. And notice that I don’t say Mother Time.

TER: I don’t feel it from the sense of my career, because I do feel like so many doors are open to me now. And it started for me in my 40s. For me, it’s the physical confrontation of my face changing. Society makes me think it’s supposed to look young, pretty and wrinkle-free. This is my history right here. This is my story.

SP: This is the number of times I laughed with my friends. This is that person who broke my heart.

TER: I’m really grateful I have a mom [Diana Ross] who’s 75 and her face looks like a woman who swallowed the sun. She’s gorgeous, sexy and full of agency. So that’s what I long to walk toward. And yet on a daily basis, you’re confronted by this other idea.

SP: What are you actively doing to fight it?

TER: I think mostly joy. What about you?

SP: I use a lot of electrical stimulation on my face. And moisturizers.