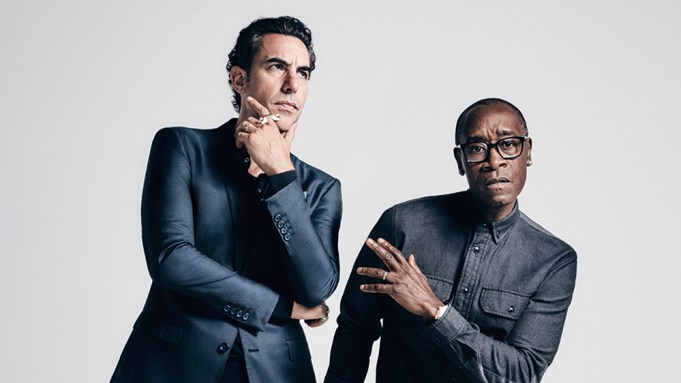 Sacha Baron Cohen and Don Cheadle sat down for a chat for Variety‘s Actors on Actors. For more, click here.

On Showtime’s “Who Is America?,” Sacha Baron Cohen multiplies his familiar gonzo comedy by four, using a quartet of absurd aliases to dupe politicians like Dick Cheney and Roy Moore into embarrassing interviews. Elsewhere on the network, Don Cheadle may not go that far on “Black Monday,” but he’s still knee-deep in character as a stockbroker at a Wall Street firm during the 1987 crash.

DON CHEADLE: You are very popular and famous, and I would recognize you anywhere, if for no other reason than you’re a giant. I mean, literally, height-wise. And your eyebrows are iconic.

SACHA BARON COHEN: They are.

DC: On “Who Is America?,” have you ever been busted? Has anyone ever gone, “You’re Ali G or Borat”?

SBC: We did tests before with “Who Is America?” to see if people would see through it. And I wore some massive wig. I walked into this gun store, and the guy immediately looked at me and goes, “I know you.” With recognition, it happens within the first second. There’s a part of the brain that recognizes the face.

DC: The architecture of the face.

SBC: I realized I had to do more extreme stuff. This brilliant guy, Tony Gardner, who created the prosthetics for this movie called “Bad Grandpa,” I went to him: “Do you think you could create prosthetics good enough that they would exist in the real world? Because I can’t be touched for three hours.”

DC: People can’t come in and make sure the glue is holding.

SBC: “Hold on, Dick Cheney. Let me glue that down.”

DC: That Israeli character that you played, that’s an extreme look.

SBC: All those prosthetics looks, you get up at 3:30 in the morning and it’s five to six hours, because you put on a new head. It’s layers and layers, and then it’s an hour taking it off.

DC: And then you sweat inside that.

SBC: When you take it off, it’s really good for your skin, because you’re covered in sweat. You’re completely wet underneath. “Black Monday,” it’s such an extreme character. How do you create a character?

DC: For Mo in “Black Monday,” it was a process of going through hair transformation, facial hair and trying to figure out, “Is this mustache too big?” As you know, you can go clown size, and it loses all reality. There’s no science to it. You’re just trying to figure out what you feel. But you find it in different ways. There’s a piece of music that somehow speaks to the character.

SBC: Are you playing it in your ear?

DC: No, it’s more in the preparation. It’s kind of nebulous how it all comes together. You cobble a bunch of stuff together and you go, “Oh, those shoes.”

SBC: The first time I played Borat, I knew I wanted to do a foreign character. I’m 24 years old. I’m driving in the car down to the East End of London, and in the back of my car, I find this hat that I bought in the south of Russia, an astrakhan hat. I stuck it on my head and looked at the mirror, and I was like, “Yes, I’m from Moldova.”

DC: And it just popped out.

SBC: It happened to be in the back of my car. When you did “Hotel Rwanda,” what’s your preparation for a part like that? There’s no way you could see your characters in “Hotel Rwanda” and “Black Monday” as being played by the same person.

DC: That was very challenging — with the accent, the entire characterization, being locked in and staying in that character all day long.

SBC: You would stay in it off set as well?

DC: Not when I went home. I would decompress. But on the set, I would always, as much as I could, stay in the character. One day, one of the guys that plays one of the characters in it, Dube, came up and he started speaking to me in Kinyarwanda.

SBC: So he believed you that much?

In this atmosphere, where you have the person who sits in the highest office supercharging a lot of this stuff, is that what gave you the inspiration for “Who Is America?” Was it specifically about Trump’s election?

SBC: Yes, it was. Under Obama, there was no motivation to do it. I thought I would never do this kind of undercover stuff again, because it’s exhausting. It’s terrifying for me. It’s occasionally dangerous. And then Trump gets in, and I immediately felt disappointed and angry. This was a guy who I’d had no respect for. I’d interviewed him as Ali G. And in “Borat,” I defecated in front of Trump Tower.

DC: He was on your radar.

SBC: That guy becomes the president? And he gets to be the president through adopting these despicable views that were so reprehensible that everyone dismissed him. People felt powerless. I thought, I have to do something with this anger and frustration.

DC: So when you do have someone that you want to go after, how do you pick a character?

SBC: The characters are designed to appeal to some of the people that I was trying to speak to. The character creation is a kind of reverse creation. Who would Dick Cheney sit across from and ultimately then sign their waterboard kit?

DC: Obviously, we improvise on our show, and we find our ways into scenes. But we always have the safety of “Cut!” You’re hanging out there. Was there ever a time on your show where you went, “OK, I probably went too far”?

SBC: I don’t want anyone to get hurt, but I want to see people’s real thoughts. I’m provoking them sometimes to see the effect of this new political culture that we’re in. It’s not just Trump. We’re in the biggest revolution that’s happened in the history of civilization. We are in the internet age. It’s bigger than the Industrial Revolution. It’s transformed the way people think; no one knows what facts are anymore. It allows people who are spreading lies to actually seem like they’re legitimate.

Trump without Twitter probably would not have become president, which is why Jack Dorsey is in the White House, having a meeting with Trump. He’s sitting across the president, who’s actually the biggest celebrity endorser of his corporation. And Jack Dorsey and Twitter cannot implement any restrictions against white supremacists or racists.

DC: Because it might affect their big cash cow.

SBC: And their only business model. They get rid of racists, they’re going to have less Twitter subscribers. We’re living in a dangerous society right now. We’re living in a society where the space that we grew up in — which is the idea that society is getting better, where people are equal despite their differences — that concept is being disintegrated. Democracy is being disintegrated, and that’s terrifying to me.

And I’m going to say all of this with the caveat that I’m a comedian. I don’t really know what I’m talking about, but this is the stuff that’s going through my head. I didn’t mean to go on a tirade.

DC: Your tirade was necessary.