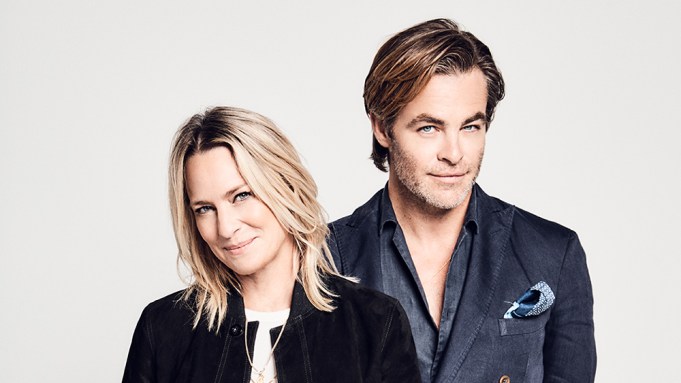 Robin Wright and Chris Pine sat down for a chat for Variety‘s Actors on Actors. For more, click here.

Robin Wright and Chris Pine both appeared in the 2017 action blockbuster “Wonder Woman,” and both have continued living out its vision of bold female power in their careers. Wright brought the final season of Netflix’s “House of Cards” in for a landing as the newly inaugurated President Claire Underwood, while Pine reteamed with “Wonder Woman” director Patty Jenkins for TNT’s noir limited series “I Am the Night.”

CHRIS PINE: “House of Cards” is obviously so reflective of the political world in which we live. Is it hard to live in that space for four to seven months a year?

ROBIN WRIGHT: In the beginning, it was hard to face. We’re actually doing reality, not just entertainment. And it was so symptomatic of the culture we live in. We weren’t too far off. Remember, we were shooting that stuff a year before.

RW:So by the time it was released, he had already done it.

CP: You had a lot of people from the political scene helping you guys create the show with real understanding of that world.

RW: David Fincher said, “You realize that we’re going to revolutionize the way people view content. They can watch as much as they want, whenever, like you would read a book. And not only that revolution that’s going to happen,” he said, “but it’s going to be so comfortable for people to participate. Let the public participate in how corrupt and how venal these people could be.” Because they didn’t create the world that they stepped into, Francis and Claire. They entered that world.

CP: You hear in conspiracy circles that corporations are running the world. In the final season, it’s not all that Skull and Bones-y. It’s actually just —

RW:It’s the business. But I think that is how it’s always worked, maybe in every country. It is this theory of “Let’s do a little bit of bad to get a little bit of good done.”

CP: I always think this idea of like “Make America Great Again” —

RW: Didn’t he steal that from Reagan anyway?

CP: Also, what period of history are we talking about? Jim Crow, slavery? I’m not quite sure what. This is not to hate on the country in which I live, which I love dearly, but we’ve had problems forever.

RW: He should have finished the sentence as “Make America great again since dot-dot-dot.”

CP: I’m just getting through this last season. It’s terrifying. You get great contextual backstory stuff about Claire. Is it hard not to be able to show this undercurrent of deep pain and emotion?

CP: That has to be super difficult to play.

RW: Maybe that’s why it was better just to have her very steely. I remember David saying, “Forget about interviewing other politicians, or female politicians.” I wouldn’t even understand what they were saying anyway. He said, “I imagined her always being just a bust of marble that you would see in the Capitol on a pedestal.”

CP: Just Claire’s shoe collection alone probably should be in the Guggenheim. When you took your shoes off in one scene, I was thinking,
“It’s like taking off a piece of her armor.”

RW: The hardest part about playing her was having to stand up so straight. Not kidding. On “I Am the Night” — you’re so likable, even when playing a bit of a pathetic character. He’s got some serious personal issues.

CP: I just did this film for Netflix [“Outlaw King”], in Scotland, trudging through mud. I shaved my beard, got on a plane. And I was in Malibu with these tiny shorts, alabaster white, trying to figure out this character as I was playing him. I knew where the season was going, threw it all into a pot, and was like, “I’ve got to just start playing immediately.” It was fun, because I had just come from something where I wanted to try to be as still as possible, which you do so well in your show. And then, thank God, I ripped that off and go to town and start chomping on scenery as fast as I could.

RW: It’s so much fun. We can’t wait for you to come back on screen. Do you want to talk about the difference between “Wonder Woman,” working with Patty Jenkins, and the one that’s going to come out?

CP: Those questions, we’re going to have to go through — what contracts have I signed?

CP: I found this time, the tables had turned on me as a man, in terms of how I interacted and played on the screen. I loved, as the character, my woman. My partner. She’s my partner. So that came to define this man. What a wonderful thing, as a character, to be in love. As a man on screen in a big film, it was interesting because my ego comes out: “Well, I want the big f–king fight. Let me climb something.” And Patty’s like, “ No, not about you.” She said “not about you” more times making this film.

RW: Not about you. This is about Wonder Woman.

CP: Yeah. I could look good in high boots and a short skirt. Give me a shot. Even in the world of playacting, is it powerful to walk on the set, playing the president of the United States with a Cabinet full of women?

RW: It’s interesting to be a female antihero that everybody loves to hate. And as a viewer, you’re like, “Wow, this is such a delicious ride. But morally, am I supposed to be her cheerleader?” It’s so layered. Because she’s female and in that role, it stands out more than if she were a man as that character. Doing those things, it wouldn’t be as shocking.

CP: That scene when you open up the Cabinet doors, and all of the older men have been fired, and it’s this new group of women: it’s an image that we have not seen. Unfortunately, it gave me chills, because it is just not a reality yet. It reflected some of the movements that we’ve been having in our industry.

RW: I think in the last few years, actresses just saying, “We have to bust it wide open” — I feel like the glass ceiling is cracked. Finally. We just need to allow more time for more transparency to occur. And that transparency starts with getting rid of old conditions and traditions. We need to pump the machine a little bit more. The top 100 films are predominantly male directed and female produced. So female producers, huge increase. We just need to get more writers and directors and roles for women.

CP: Creating the machinery and the movement in the industry, where young women are getting educated in directing, so there’s a clear path toward success, instead of obstructions.

RW: And giving them the chance. You’ve got to give that, because all of those guys got a chance at some point in their career.