Continue to Variety SKIP AD
You will be redirected back to your article in seconds
Jun 10, 2019 6:00am PT 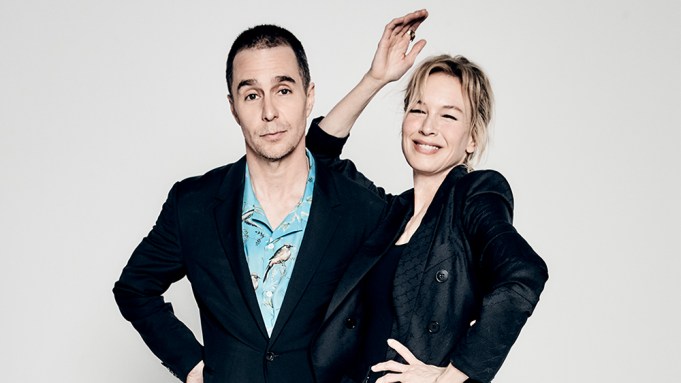 Renée Zellweger and Sam Rockwell sat down for a chat for Variety’s Actors on Actors. For more, click here.

Sam Rockwell and Renée Zellweger both owe a career reinvention to the legendary choreographer and director Bob Fosse. Zellweger cemented her stardom with the 2002 film adaptation of Fosse’s musical “Chicago”; now she’s the latest big-screen superstar to shift to TV, with a rich turn in Netflix’s anthology series “What/If.” Rockwell, who, like Zellweger, is an Oscar-winning movie actor, actually plays Fosse in FX’s “Fosse/Verdon,” making his series debut examining the Broadway legend’s gifts and demons.

SAM ROCKWELL: We have something in common. I’m playing Bob Fosse, and you did “Chicago,” which I watched recently.

RENÉE ZELLWEGER: Oh, you did?

SR: I’m too lazy, and I wasn’t going to read the play or see it onstage. You were great in it. How was the preparation for the dancing?

RZ: It was Broadway boot camp. We spent months on a makeshift stage on a loading dock in Toronto. Rob Marshall took Fosse and expanded on it, but there was a lot of the original vocabulary incorporated.

SR: Did you get cramps in the middle of the night?

RZ: We didn’t have a middle of the night. We worked around the clock. Didn’t realize what a blessing it was until now. I just remember joy. We were working hard, but it didn’t feel like work.

SR: Michelle Williams [who played Gwen Verdon], she was like, “They seem like normal people, but these dancers are superheroes. What they can do with their bodies is extraordinary.” They don’t complain. They’re soldiers.

RZ: Did it change the way you thought about your work?

SR: I’ve always been a physical actor, and I was a hoofer before, but not like this. This is serious hoofing. We’re both physical actors.

RZ: It’s more interesting when you find a way to express something subtly, without words. You say so much more with the way that you move, or don’t move, than you do with a line.

SR: When you do this flawless British accent —

RZ: This is where the interview gets awkward.

sr: No, you do. When I work on accents, I always have a dialect coach, and then I have to compartmentalize. Do the impersonation, and then work on the acting separately, and merge the two eventually. Do you do that?

SR: You do it as Renée, and then throw the British accent on? Because if the impression takes over, you miss out on the soul of the character.

“It’s more interesting when you find a way to express something subtly, without words. you say so much more with the way that you move than you do with a line.”
RenÉe Zellweger

RZ: I like everything to become such a habit that I don’t think about it anymore, so that whatever you’re trying to communicate can be in the moment. If you’re busy calculating lists of things that you’re supposed to be getting right, there’s no possible way to transcend whatever is going on.

SR: It’s survival. You don’t want to see the acting.

RZ: When it comes to accents, I like to marry it to the text early on, because you can get into a habit with hearing what comes out of your mouth. If you don’t spend the time doing that, the first time it comes out, it’s so distracting. Whatever feeling you’re conjuring is lost to “I’m such a fraud.”

SR: Or you fall in love with the line reading: “That’s the way it should sound every time.” That’s death. I did episodics early on. Did you?

RZ: No. I’m sure I tried. But probably nobody would give me a job.

SR: You got any good audition stories?

RZ: I was trying to think about that a lot recently, with the things that are going on in our community right now, the current reset. I have things where I’ve felt like a jerk, because I watched myself spiraling.

SR: I remember going in for “ER,” for Noah Wyle’s part, I think, and that was terrible.

sr: I came in with a lab coat. Talk about gilding the lily.

RZ: Did you bring a patient with you?

SR: I brought a hypodermic needle, but without the needle, just the plastic part. They looked at me like I was from Mars.

Did you have anything where you were pinching yourself? Somebody you worked with who was a hero?

rz: Well, my audition for “Jerry Maguire,” I didn’t believe it was happening.

First of all, it was hilarious to me, the fact that I was driving across town to the Sony lot, because Tom Cruise was there, waiting for me. That was high comedy.

RZ: Everybody knows. No, the nicest guy in the world. We did the scene where he shows up drunk. That’s all I’ll say about that!

SR: And it felt like you had good chemistry?

RZ: I was told later that it had something to do with “the tie test.”

RZ: He had to change his necktie, and I was standing next to him. And we just had playful banter. We stood next to each other and giggled, laughed, and that was it.

RZ: Everybody was telling me, “Get ready.” The pace. But haven’t you found that making movies in the last few years has been the same?

SR: I did eight episodes, and it’s like making four independent movies in a row. Three, four takes sometimes.

“I’ve always been a physical actor, and i was a hoofer before, but not like this. This is serious hoofing.”
Sam Rockwell

RZ: That’s a good way to get your movie made these days: Call it TV. I love that you have to be courageous in the choices that you make, because you might not get to do it again.

SR: That’s right. The adrenaline of losing the light.

RZ: You have to be ready to make some choices.

SR: Friday night at midnight and there’s a big emotional scene, and they’re like, “We can shoot this Monday, or we can do it now.”

RZ: Kamikaze all the way. Because you don’t know how long it’s going to take to get back to that place. It shows up or it doesn’t, and some days you have to fake it.

SR: What do you remember from your Oscar night?

RZ: I didn’t fall down the stairs.

SR: I thought about that too.

RZ: I don’t remember it that much.

RZ: I remember Sean Penn. When you look out from the stage, everything is a freeze frame. Time stands still. It looked like the “Sgt. Pepper’s” cover. Sean Penn was right in the middle.

RZ: I didn’t have any expectation that I would be overwhelmed in that way. We get to do the job — that’s the win. I’ll forget in the middle of the process that this is for public consumption. God, we have been lucky, haven’t we?

RZ: Even when it’s hard, even if it’s dark, there has to be some joy in doing it.

SR: Gratitude, which is tough when you’re doing a 17-hour day.

RZ: In a little plastic trailer, in subzero temperature, far from home. It’s awesome, isn’t it? And that we keep wanting to do it, that’s pretty telling, isn’t it?