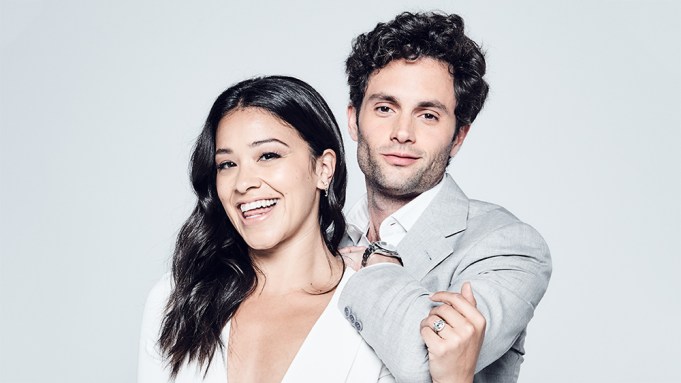 Penn Badgley and Gina Rodriguez sat down for a chat for Variety‘s Actors on Actors. For more, click here.

Penn Badgley, a heartthrob on the 2000s soap “Gossip Girl,” graduated last year to even darker fare as a stalker with a literary bent on watercooler smash “You,” whose first season aired on Lifetime and which will continue on Netflix. Rodriguez has soap experience too: She won attention — and a Golden Globe — as the protagonist of “Jane the Virgin,” the CW drama that riffed on the telenovela tradition over its five-season run.

PENN BADGLEY: I just watched you go through several marriages and engagements. I’ve been watching your show the last couple days.

GINA RODRIGUEZ: I have been married multiple times, and now I’m going to have a real one. My fiancé [now husband] was like, “Don’t f–king waste all your tears on the fake wedding.” I wrapped like two days ago. But I feel complete. I’ve known for two seasons that we were going to end on Season 5. And you know what it’s like to be able to complete something. I watched “Gossip Girls” like crazy.

GR: With “You,” you guys had a life somewhere else. To be at Lifetime and then not to see its potential, but then to go to another service like Netflix and to be exposed to many more people.

PB: It was a near-death experience. There was a two-week period where we were technically canceled.

GR: What’s up with your crazy eyes?

PB: This is something that people talk about. I’m like, “Isn’t that acting?”

GR: I make crazy facial expressions on “Jane.” They’re always pulled from somebody I saw on the train in New York.

PB: That’s totally foreign to me. I don’t find it difficult to access what apparently people define as creepiness or even rage. Somehow people find it more roguish and charming. It’s like, “I’m killing people in the next scene.” And maybe there’s something to that, that we’re not evolved enough yet not to be attracted. This is the evil-white-man thing.

PB: So I had this measured response: “Let’s maybe check ourselves a little.” And I was really pleased and surprised to see how much that elevated the conversation around it. I think if you’re not careful, because it’s on Netflix, you could binge it all too easily. And then you’re like, “Why do I feel off?”

It’s a meta thing. You can lean into the pop culture element of it, and then you continue the conversation off-screen. You’ve found that, right?

PB: What I enjoyed so much when I saw your show is what a positive platform it seems to be for young women of all different kinds. It’s taking on abortion.

GR: It was pretty bold. Jennie Urman, the showrunner, wanted to write a woman’s story, and she happened to put a brown woman in the space of it. I think that’s why it resonated so much.

You’ve been mad famous for a long time.

PB: It’s boring to me. I have an acronym for it that I just came up with. It’s F–king Awful, Man, Extremely. You’re dancing on a razor’s edge.

PB: How quickly did it feel for you?

PB: And when you falter, it’s very public. When you break up, it’s public.

GR: Oh, yeah. I forgot about that part.