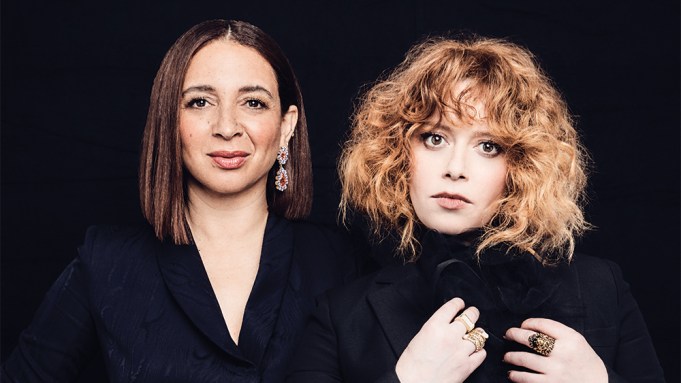 Natasha Lyonne and Maya Rudolph sat down for a chat for Variety’s Actors on Actors. For more, click here.

Natasha Lyonne and Maya Rudolph are two of TV’s funniest stars — and this year, both confronted mortality on-screen. In “Russian Doll,” co-created by Lyonne, the actress dies over and over again, trying with each reincarnation to finally overcome past trauma. Rudolph dies only once in “Forever,” but it’s hardly conclusive: She spends her afterlife thinking through what she really wants. Between them, the two made the comedy season darker, and vastly more thoughtful.

MAYA RUDOLPH: This is going to be casual. Because I know everything about you that I need to know.

NATASHA LYONNE: And I’ve been Googling you for six months straight. So I feel caught up. I would say that you safely know every single core thing about me, more importantly, even if some details are missing. But I feel, still, in awe of you.

NL: I think maybe one of the things I admire so much is that we can be in the middle of the deepest, heaviest, “What does it all mean existentially?” on our TV programs. We both chose to make very existential shows. But then I can watch you flip, and you can light up in the room. For me, I need to go outside, I need to smoke a cigarette and then I need to reassemble before I can shift from heaviness.

MR: I personally think it’s just a matter of blood sugar. You can figure it all out with blood sugar.

NL: I have another theory, which is that because of “SNL” and, first, The Groundlings, that there’s a deep training ground in there that’s very real. You give them what’s really a very formal education: Under all conditions, the highest of stakes, at the most pressure in the world, deliver.

MR: Yes. Very much so. Also a manual: “Here’s the language of comedy or improvisation. These are the rules of improvisation because if you use these, then things will move forward.” I like a road map.

NL: I really enjoy inhabiting a more surreal, nebulous, mercurial space and then getting in there and moving things around. I enjoy it in the murkiness a bit.

MR: Well, you like a lot more chaos than I do. Why “Russian Doll” now? It’s interesting to me that you’re doing it right now in your life, because I feel like if people don’t know you and everything that you are capable of in front of
and behind the camera, now they know. The secret’s out. Sorry, but your secret’s out. But why is it now?

NL: Speaking frankly, it’s a bit of a challenge to receive so much positivity and almost ask myself, “What took so long?” Because obviously we’ve known each other for 20 years, and I’ve been wired this way pretty much the whole time. And I guess things just sort of appear on their own timeline in a way.

MR: In creating a show, sometimes as actors, we don’t think that we can do that. Not everybody gets the memo, “If you build it, they will come.” If you want to do it, do it.

NL: That’s what’s so radical about it.

NL: Well, I think it’s a new era. I mean, we’re women, which means 97 different things. And mortality and this inner panic: I’m going to actually get to make things, and I don’t want to run out of time. Adulthood, inevitably, it only goes in one direction … the end. Why did you similarly choose to be interested in a show about mortality, and why now?

MR: It’s an itch that I just want to scratch. I want to talk about it, I want to know more about it — the idea of what else is there? Is this it? On a bad day, I’m going to say, “This is fu–king it. This is bulls–t.” And on a great day, I’m going to say, “What if we get to see our loved ones? What if there’s something else? What if this is the beginning?” You f–ked me up so good the other day because you sent me a YouTube video.

NL: It’s a time lapse about the end of the world.

MR: And you’re really looking at the end of the universe.

NL: But the real end, the black hole end, end-end. But we’ve got lots of time.

mR: We’re going to be fine.