Continue to Variety SKIP AD
You will be redirected back to your article in seconds
Sep 7, 2019 7:30pm PT 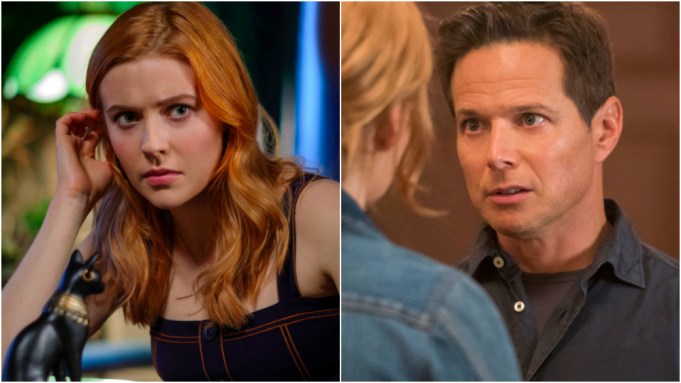 The CW’s “Nancy Drew” may technically be adapted from the long-running mystery novel series of the same name, but diehard television viewers may be unable to resist comparing pieces of the show to another teenage sleuth series, “Veronica Mars.” After all, both shows center on a young woman who sets out to solve crimes and mysteries in her small town, and each of those young women are living with a single father who supports his daughter’s inquisitive nature — to a degree.

But although both relationships come with a sense of banter and support, there is one key difference at the outset of “Nancy Drew”: When the show begins, Nancy (Kennedy McMann) is already an adult, which greatly affects how she relates to her father Carson (Scott Wolf), and vice versa.

“When she decides to push the boundaries of the law, it’s a felony, and not a casual, cute little thing to do anymore,” McMann tells Variety.

When the series starts, Nancy is still living at home after graduating from high school. The original plan was for her to go away to college, but her mother fell ill, and she stayed back to help care for her. Now she finds herself working at a local restaurant and very quickly embroiled in a murder mystery. But it is far from the only questionable thing to happen in her hometown, and she has her sights set on digging into some of the others, which may have personal ties to her own family, as well.

“You have two people who are fundamentally as connected as two people can be who have just lost each other, and there’s this chasm between them and they have lost the ability to find the other,” Wolf says of the father-daughter relationship at the start of the show. There’s “this idea of, ‘Who am I supposed to be to you now? And who do I need you to be for me?”

Wolf adds that there is also a tension for Carson because “on the one hand, there’s this embrace of, I love how curious she is. I love how gifted she is at actually unearthing mystery and story. I love that she ultimately is really putting herself on the line for justice and for the right thing to come to light.” But on the other hand knowing what his daughter is doing is “stressful and dangerous.”

And then there is the idea that Nancy may get some of the skills that make her a good detective from her dad. “In a lot of ways I think a lot of Nancy’s abilities were encouraged and came from,” McMann says of Carson, noting that, for him, that comes with “an aspect of seeing characteristics of yourself in her that kind of scare you as she’s getting bolder.

McMann and Wolf had to find their on-screen relationship quickly. In the original version of the pilot, Freddie Prinze Jr. played Carson Drew, but after the series was picked up, they decided to go a different way and cast Wolf in the role, requiring the duo to reshoot key scenes in that first episode. Both McMann and Wolf stress that they were lucky that their father-daughter chemistry came naturally, and they didn’t have to spend a lot of time in meetings or rehearsals to find the way their characters would interact.

Wolf calls himself “a proud dad,” watching McMann step into the role on-screen, as well as the role of leader on set. The latter is something McMann doesn’t just feel is her responsibility alone, although she admits to taking time and care to take her part in it very seriously.

“I just think the best thing you can do — anybody on set, in any position — the more you give, the more you’re going to get. And the more effort you put into cultivating a really positive environment, everybody is going to rise to that,” she says. “It really helps just cultivate a very productive, very positive, strong, united front. It just makes everybody excited to make something really amazing. There are a lot of really strong, really awesome people leading our set, and I hope that I can contribute positively to that.”