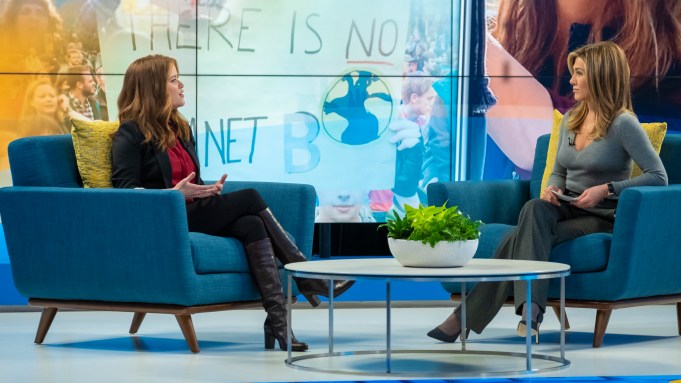 SPOILER ALERT: Do not read if you have not yet watched the first three episodes of “The Morning Show,” streaming now on Apple TV Plus.

Two years after the “Me Too” hashtag went viral, Apple TV Plus has finally debuted “The Morning Show.”

The new drama arrives in a world that has been rocked by the changing of the Hollywood guard, after high-powered, high-profile players such as Harvey Weinstein, Charlie Rose and Matt Lauer were ousted from their positions amid allegations of sexual abuse (Weinstein will soon go to criminal trial on charges of rape). When the show was first created by Michael Ellenberg, its primary source material was Brian Stelter’s 2013 book, “Top of the Morning: Inside the Cutthroat World of Morning TV,” and focused on the chaos that comes when broadcast daytime news programs compete with each other for ratings in an increasingly digital world. But after #MeToo, “The Morning Show” showrunner Kerry Ehrin wanted to incorporate a story of the power shift that comes when a beloved male icon falls and the woman who had been by his side struggles to take control.

“I relate to it a lot because I’ve been in entertainment for 30 years and I don’t think it’s hugely different: It’s high-stress, it’s high stakes, you don’t have time to stop and think about whether or not you’re happy, you just have to keep going all of the time,” Ehrin tells Variety of the world of morning news.

The timing of the show’s release is not lost on those who made it. Launching on the new streaming service Nov. 1, it comes just weeks after Ronan Farrow’s “Catch and Kill: Lies, Spies, and a Conspiracy to Protect Predators” alleged, among other things, that NBCUniversal’s CEO was told about sexual abuse issues within “The Today Show” in 2015, years before anchor Matt Lauer was ousted from the show for such complaints.

In creating the character of Mitch Kessler (played by Steve Carell), the fallen anchor, Ehrin says she wanted to explore “a person who had been in a bubble of power for so long and is a narcissist.” Mitch is accused of inappropriate relationships with junior women on the staff — relationships that are considered abuses of power because of his status on the show and at the network. But he is quick to classify them as “affairs” and say they were always consensual.

“He has always been supported in his decisions. He’s coming from a place of power, and part of the journey for this character is the chipping away at that structure that is so well developed inside of him. It’s tragic to see,” Carell says.

At first, “The Morning Show” has to just deal with the literal immediate aftermath of such an important figure being removed from his position, from his co-host Alex Levy (Jennifer Aniston) admitting the news is true when addressing viewers mere hours after the firing, to Mitch reacting in anger to the choice of words Alex uses when doing so.

“We talked about the five stages of grief, and first there’s anger and Mitch breaks the TV. And then there’s the coffee scene in Episode 2. That’s not really about making a cup of coffee. He doesn’t know how to make a cup of coffee — his wife brings him one every day; this is a man who’s been given everything — but that scene was about loss and the pain and loneliness,” notes executive producer and director Mimi Leder.

Mitch is not alone in acting out of anger or a sense of selfishness. When Alex visits him, she yells at him not for harming impressionable young women who trusted him and the safety of their workplace but rather, she says he screwed up her life. Later, when the show’s executive producer Chip (Mark Duplass) implores Mitch not to show up at an awards ceremony honoring Alex, Mitch rants about not speaking up “when they came for the rapists” and who will be left to speak up when they come for the regular creeps?

That scene, Leder admits, was a very difficult one to shoot — in part because it was eight pages long, just dialogue between two men. But more importantly, it was a tricky tone to get right. “If you play that scene too over the top or took it too far in the direction of ridiculousness, you would just fall right out of that scene. But because it had a great simplicity, I feel, it’s a scene that makes you angry. And of course it makes me angry and I don’t like him. A minute ago I was crying because he couldn’t make a cup of coffee and had ruined his life; it’s a very confounding character,” she says.

But so is Alex, in some ways. “There’s a great sadness to this character — and great flaws. If you can relate to this faceless audience but yet you have trouble connecting to your child and your husband, your family, you are deeply flawed,” Leder explains, noting that they will be exploring Alex’s persona throughout the season: “Who are you to the world who wakes up to you every morning, and who are you really?”

Thus far, Alex has revealed herself to be a risk-taker when pushed into a corner but also clearly a woman who has had to present herself in a very specific way because of the gender politics of broadcast morning news. When she has moments of great emotion, or even simpler moments of realness, such as pulling extensions out, it is always behind closed doors. Mitch can throw a remote at a television in front of a group of people without anyone saying anything; Alex grieves her loss alone, but for the audience.

“I wanted to add to the language of the visuals by holding on shots very long, like with Jen looking at herself in the mirror — really uncomfortably long, just looking at herself, going through every emotion in that private moment. It’s something you don’t really see anywhere else,” Leder says.

As the 10-episode season goes on, though, the show will explore a total of 20 days after this event, examining the details of the allegations and the fallout from them, as well other fallen players in a similar world, including Martin Short who plays a director who has been accused of various kinds of sexual misconduct and who commisserates with what Mitch is going through and complains about being “in a prison of public opinion.” Getting a glimpse at his world offers Mitch some insight and new perspective into his own.

“The whole world got turned upside down. All of the rules are not the rules anymore, no one knows who’s in charge, no one knows who’s making the rules. So I come into this world and she’s discovering a new leadership role, and it’s all very murky,” says performer and executive producer Reese Witherspoon. “Steve’s character lived by a rulebook that was an unspoken rulebook, and so did Alex. And then everything changed and now nobody knows how to behave.”

On the verge of being pushed aside prior to these allegations, Alex was seen as the “mom” to the public, to Mitch’s “dad” persona. Now that has been tainted and a new network executive named Cory (played by Billy Crudup) has come in to get things back on track. He wants new blood, partially to reach for ratings, and sets his sights on Bradley Jackson (Witherspoon), a local Southern journalist who goes viral while covering a protest at a coal mine.

“She’s a real journalist. She’s good at the job but not a good political game player. She calls out bulls—, but she’s smart. I wanted her to be good at what she did,” Ehrin says.

After Mitch tells Alex she was going to be pushed out and her attempts at negotiating for new co-host approval fail, she takes a new power into her own hands by announcing Bradley as her new co-host while she receives a journalism award. Declaring it so publicly is a risk, performer and executive producer Aniston admits, but one taken because of a “a desperate grabbing at anything. Literally I was taking hits from every angle and it was a last-ditch effort to keep my control, to keep my place and my job.”

The network and producers of the show-within-the-show seize that opportunity and let Alex’s claims become fact — and a new era at their titular morning show is born. However, the network brass is at odds with each other about what this means, with Fred (Tom Irwin) wanting to keep the “family” vibe that has been necessity in morning television for decades, while Cory is excited by the idea of the women fighting, which he thinks can just lead back to replacing Alex.

“The fact that it was a crazy decision made in a super highly emotional time that she then has to live with was very entertaining to me,” says Ehrin of Alex’s statement. “But to Cory’s credit, he seized on it.”

Ultimately, Alex gave Cory what he wanted by announcing Bradley’s name, but in doing so, she also seized some more of the power from the men who have thus-far been in charge. While they try threatening her, and even her agent (Adina Porter) asks if she wants to backtrack and say she was just emotional over Mitch, Alex leans all the way in and points out that she is now the face of the morning news show — a face America loves — and therefore she is now in the driver’s seat. She even goes so far as it take on a producorial role, telling the writers the term “accuser” is better than “victim” when interviewing a former staffer who came forward against Mitch.

How that power dynamic ebbs and flows when Bradley is sitting next to her at the newsdesk, facing down the nation, as well as those around them who want them to fail, is the central piece to the rest of the season.

“This show is also very much, in my opinion, a love story between Alex and Bradley. It’s about these two women that collide at a certain point in their careers, which is probably no accident in the scheme of the universe, and they collide and they want control, and they’re tired of people telling them how to get control. So they’re very much alike, but they’re very different, and they will influence each other throughout the season,” says Leder.

While this may look like a step in the right direction for the public, there is a lot of behind-the-scenes drama with which to still contend, including more specifics about the women’s experiences with Mitch, as well as concerns from staff members who may have known more about the allegations than they let on. And no one will get off scot-free. “That’s not just about the men, but the women, too,” Ehrin notes. In the third episode, for example, Alex and producer Mia (Karen Pittman) have a heated discussion about Mia’s own relationship with Mitch, with Mia noting that Alex has always had more power than other women and Alex saying she never “approved” of what went on between her co-host and the producer. But that is just the starting point.

“The show, to me, the center of it was how people lie to themselves and what that looks like in a lot of different scenarios,” Ehrin says. “That’s a big part of the storytelling, the fears and people looking at their own behavior and re-assessing it.”