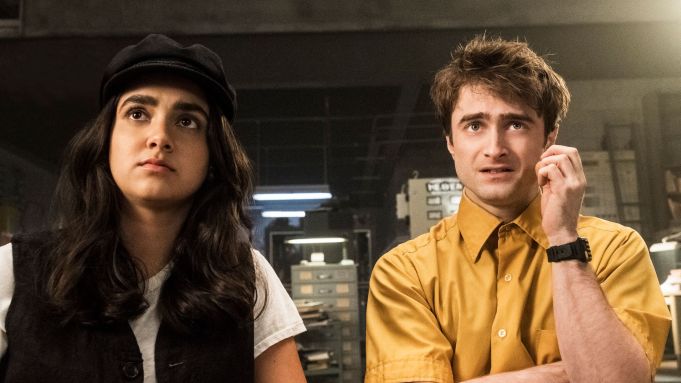 Simon Rich may have written his novel “Miracle Workers” about two angels who have to make a miracle happen in order to keep God himself from giving up on the world in 2012, but for many — including the actors who signed on to play adapted versions of those angels for TBS’ new half-hour comedy series — the themes have only felt more relevant as time has gone on.

“I think there’s something really beautiful in the idea that the world is utter chaos and we often feel that we are ourselves messes and that life is crazy, but ultimately you’d always rather exist than not exist. There’s a certain cheerful pessimism that the show has that yes, we all might go to hell in a handbasket and it’s all going crazy, but we can be really good to each other along the way and it will make the journey easier to be good to the people around us,” series star Daniel Radcliffe tells Variety.

In the Rich-created, seven-episode cable comedy, Radcliffe plays an angel named Craig who he calls “a frighteningly cautious, kind of ineffective angel who takes an immense amount of pride” in his work, while Geraldine Viswanathan, in her first series television role, is Eliza, a “gung-ho,” risk-taking angel with “big ideas” and a “drive that was really relentless,” says Viswanathan. Steve Buscemi plays God in the series.

The first season of “Miracle Workers” was designed as a close-ended story, and Radcliffe shares that should the show get renewed for a second year, the plan is to be an anthology series, with “a completely different setting and characters and stories with the same actors ideally.” This was appealing to him because “standard TV contracts in America would have you locked into playing one character for a very long amount of time, and having done that before already I wanted to avoid that situation.”

But for the first season, Radcliffe’s character has been working solo in the department of miracles for years but only focusing on small prayers that he knows won’t upset the balance of the universe if he answers when Viswanathan’s Eliza gets thrown into his space.

“[Craig] really requires a lot of help,” Radcliffe says. “This guy’s been alone for a very long time [and] it makes sense to me that in the face of kind of overwhelming odds that you would then scale back your ambition because you’re so scared of failure [and] by risking nothing you’ll never fail in anything, and I think that is where Craig is in the beginning [but] she makes him realize you’re never going to affect anything in the way he wants to if you’re not braver and bolder.”

The early part of the season sees Radcliffe and Viswanathan working together in very close yet secluded quarters as the only two angels being bombarded with hundreds, if not thousands, of new prayers. The space they work in is “massive” enough to further shine a light on just how alone they are in facing down such Herculean tasks, Viswanathan points out.

“The first two episodes, it is for the most part Daniel and I in that room, and I think there is kind of the feeling of being isolated and just having each other and really having to work as a team to get out of the mess,” she says.

Radcliffe shares that Craig and Eliza’s workspace was filmed in a “huge, old factory” and rather than just build sets inside, the production used the factory “pretty much as it is.”

“I think it’s a really exciting challenge…to come up with an aesthetic for heaven that no one’s seen before,” Radcliffe says.

As episodes go on, and as the miracle Eliza wanted to make happen seems to become more impossible, though, they involve other angels from other departments. But at the center of the story is the idea of the importance of connection.

“There’s no individualistic hero; it is such a team effort. And I think that’s a powerful message, too, and it sounds kind of corny but a lot of it hinges on love and relationships and coming together,” Viswanathan says. “The things that really resonated with me were the chaos and the randomness. … It does make sense of a lot of questions about life and the universe and that makes a lot of sense to me, that there is absolutely no explanation — that nobody knows what they’re doing, that it’s just chaos. There’s solace in that and all you can really do is work together as a team.”