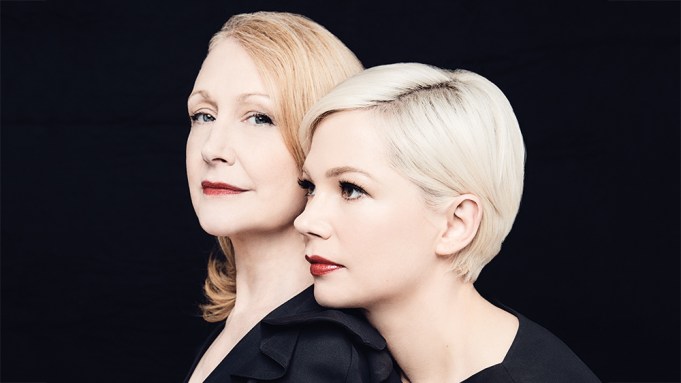 Michelle Williams and Patricia Clarkson sat down for a chat for Variety’s Actors on Actors. For more, click here.

Indie-film stalwarts Patricia Clarkson and Michelle Williams brought class and grit to the TV season. On HBO’s “Sharp Objects,” Clarkson stole scenes as Adora Crellin, a cracked Southern belle whose performance of perfection has a whole town fooled. On FX’s “Fosse/Verdon,” Williams put on a show of her own as legendary dancer Gwen Verdon, fighting to be seen as relevant and viable in a sexist industry.

PATRICIA CLARKSON: We met on “The Station Agent.” You were, I think, 10.

MICHELLE WILLIAMS: Trying my best to act like a grown-up. It was a beautiful experience because of the people. I loved every second of making it. And so many movies are so pressurized.

PC: But here we were in New Jersey with no money. Tom McCarthy had written this little gem of a movie, and we got to be in it. We all gathered — we were in the worst hotel. There were stains all over my carpet. I think there was a body in my refrigerator.

MW: I remember, you gave me a great piece of advice that I think of to this day. It was very actress-to-actress. We were out to dinner before shooting the next day, and I had ordered some atrocious meal. You were like, “No Chinese food before you have to shoot in the morning. Salt.”

PC: And you don’t eat Chinese food. I don’t either.

MW: That was such an exciting time to be in New York City. You could scrape a couple bucks together and go off and make a movie. Have you found it different working in television?

PC: It’s about the people you work with. I watch you in “Fosse/Verdon,” and to me, it’s a movie. I was making a little movie each week. It didn’t feel as though we were on some TV schedule because it was HBO. We had luxuries. And I love doing independent films, but we know we like having a trailer.

MW: It is so nice to have a trailer.

PC: We like being paid, it turns out. This just in. But I don’t think that took away any of the artistry or the brutality of the subject. It felt like home after a while.

MW: Isn’t that nice to have something to return to? Often, making independent films, you’re in these intense situations with people, but for a short amount of time. And then you disband and you grieve them. You miss them.

PC: Film is so fast and fleeting. You always say you’re going to stay in touch, but it’s hard with all of the people we meet. But when you work on television, it really is a lot of time spent together and a lot of long, emotional days. I found great comfort in knowing that my journey wasn’t brief. Even though this character tortured me in many ways internally, it somehow eased the pain. Were you intimidated at first, taking on Gwen Verdon?

MW: I miss her. You know, when you play these women … Maybe you don’t miss playing Adora.

MW: But it’s the same as having a long run in a play. When you spend so much time with these women, it’s hard when it’s over. I’ve always loved making movies because you create these families everywhere you go. And this felt like the most long-term family that I had stayed in. And I miss that still.

PC: You have to sing and dance and be this extraordinary woman that everybody loves. How did you prepare?

MW: It’s using whatever material is available via YouTube. It’s something I’d picked up on “[My Week With] Marilyn”: You watch all this material until it absorbs, and you can see it play in your mind’s eye. And then there’s the down and dirty of learning it. My dialect teacher is at Juilliard, so I go to the classroom. It’s getting the education I never had, in reverse. When Sam [Rockwell, who played Bob Fosse] and I weren’t doing one thing, we were training for the next; I consider it the most incredible honor and joy to be supported. A lot of indie filmmaking is feeling unsupported, which has its own benefit.

PC: There is no net.

MW: And you’re developing it for yourself.

PC: On television, there’s a lot of net. You can fall and someone will catch you.

MW: When you initially start thinking about a role, how does that process evolve while you’re shooting it?

PC: What’s most important for me is — with enormous respect for writers — not to dwell on the script. The lines will come. It’s most important that I have an emotional center of this character. That I know the character’s demons and angels; you’re going to need both at the drop of a hat. And a director can’t help you with that often. I call it walking the part. I cling to one thing the character has said, and I think of it all day. And once I feel the emotional life, then I start to look at the words.

With Adora, I realized that I couldn’t really think too far out with her. I had to take her in an unusual way as an actor. I had to take her one day, one week, one episode at a time. It’s very emotional for me to talk about it because the depth of where she goes is unforgiving and unforgivable. So the night before, I tried these dark journeys I was on; I’d stay as high as I could. It’s odd. I tried not to sink because I knew so much was coming that I tried to stay almost vain about her, keep the vanity about her until I got on the set and then let it all fall. Some people would say it’s a French way to work.

MW: I must have still been doing “Dawson’s Creek” when we did “The Station Agent.” Doing “Dawson’s Creek” for six-and-a-half years, while it was an incredible learning experience — we did 22 episodes a year, and you’d be getting scripts at the last minute and you had zero input. It was a little like a
factory job.

MW: It was formulaic, yes.

PC: You couldn’t curse or be naked.

MW: Try as I might. I don’t think I’ve done television in between then and now because of a fear of loss of input. When this came around, people had been saying for a long time, “Television is different now.” And I could see that that was true and that it was something that I should open myself up to.

PC: We do have control. We do have input. It’s not formulaic. We’re not living by a code of conduct.

PC: We can spread our legs if we want to.

MW: Our legs and our wings.

PC: And I think as we age, as actors, we become more comfortable in our body and in our souls and in our identities. Because we don’t care.

MW: It’s the great advantage of aging, that we actually get more facility with the thing that we do.

PC: That’s why we should be working more as we age — because we’re way better.

MW: So much better, and having so much more fun.