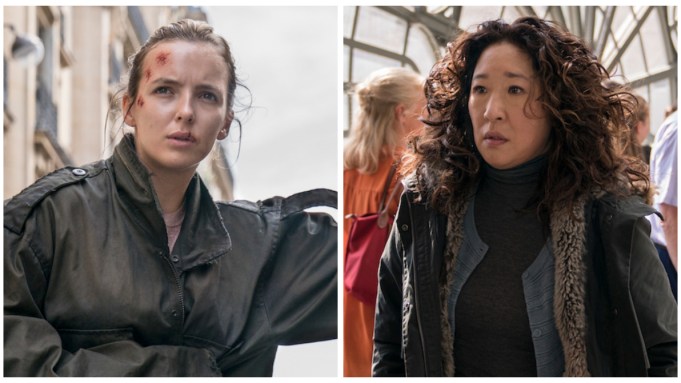 “Killing Eve’s” new head writer and executive producer Emerald Fennell took the reins of Season 2 with the attitude that both of the main characters — the titular MI6 agent (Sandra Oh) and the assassin she stabbed at the end of Season 1, Villanelle (Jodie Comer) — could “die in any episode.”

“I never wanted that thing that you often have often with famous thriller characters, which is, ‘They’ll all be fine!'” Fennell tells Variety. “I think it’s really important to say, ‘OK well if this is a fight to the death, and demonstrably it is with what happened last [season], no one should feel safe.'”

Fennell notes that series creator Phoebe Waller-Bridge established this kind of anti-precious approach to characters early on in the first season when she killed off Eve’s boss Frank (Darren Boyd). “The brutality of that and the fact that you never look away from it,” Fennell explains, helped exemplify that “there is a sense that both of them are getting into stuff that’s properly deadly,” which is key to keeping the tension and stakes high on such a series as “Killing Eve.”

“Otherwise we don’t believe it anymore,” she says.

Fennell notes that it often common for thrillers to jump forward in time in order to skip having to watch their heroes recover from their battle wounds. But true to the subversion of the genre that “Killing Eve” started when it launched with two women in the MI6/assassin cat-and-mouse relationship, here, too, did she want to do the unexpected.

“Immediately the thing I was interested in after Episode 8 of Season 1 was, ‘What the f— does Villanelle do when her power’s been taken away? And what on Earth does Eve do the moment she’s done something completely unfathomable?'” Fennell says. “I felt very strongly about seeing that immediate fallout.”

This led her to pick up the second season premiere mere seconds after the first season finale left off. While Fennell admits she would have liked to keep it a secret from the audience as to whether or not Villanelle was alive, that was impossible when trying to market the new season. But while the audience knows she survived, Villanelle is in the wind, and because of that Eve is unsure whether or not her wound was fatal.

“We couldn’t cheat around the fact that Villanelle is bleeding to death,” Fennell says, noting that a lot of the early part of the second season will be about how she copes with people looking for her when she is not operating at her best. “In the end what we ended up doing was making a virtue of something that usually would be admin in any other thriller. In any other thriller it would have been about getting Villanelle back to her sexiest point again.”

Additionally, Fennell says that “assassins have the shortest sell-by dates” and often when one is getting “close to 30, they get more reckless.” But Villanelle’s injury should knock her down a peg or two in thinking she is untouchable.

“If you are immortal, which is what Villanelle was in Season 1 and has been her whole life, what does it feel like when you’re suddenly mortal and at the mercy of people who are beneath you in every way?” she says.

Meanwhile, for Eve, one of the first things Fennell says she thought about when breaking story for the second season was “What do you do when you have got blood under your fingernails and are in Paris and you’ve got to get home?”

Fennell, who spent some time living in Paris herself, recalls times she would be on the train “hungover, let’s say, and maybe full of a bit of remorse.” That led her to view Eve’s post-stabbing mood as “the worst hangover ever.”

“This is the morning after you’ve done something unforgivable and you have to go home and face the music,” Fennell says of where the second season premiere picks up with the titular character.