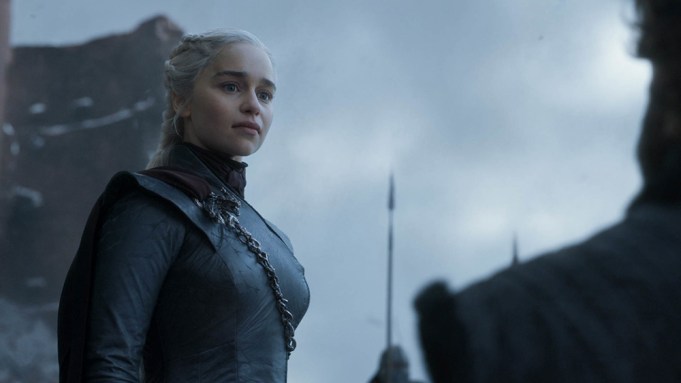 (SPOILER ALERT: Do not keep reading if you have not finished Season 8 of “Game of Thrones.”)

“Game of Thrones” star Emilia Clarke — a.k.a Daenerys Stormborn of House Targaryen, the First of Her Name, Queen of the Andals and the First Men, Protector of the Seven Kingdoms, the Mother of Dragons, the Khaleesi of the Great Grass Sea, the Unburnt, the Breaker of Chains — is now officially done with the series that made her a household name.

Speaking with Variety, Clarke spoke about how it feels to be done with the megahit HBO series, how she prepared for one of her most pivotal moments on the show, and how she feels the show will be remembered.

Read her full interview below.

Congratulations are in order now that the finale has aired.

Thank you so much. It’s incredibly surreal.

Now that everything is done-done, how does it feel?

This show is definitely not “Cheers.”

It’s not. Though “Cheers” is brilliant. I love me some “Cheers.”

With all due respect to “Cheers,” of course. You give this massive speech on the steps of the Red Keep to Dany’s assembled army. How did you approach filming that scene?

I’m glad you’re asking me that question. I’ve had a lot of Dothraki, Valyrian, fake languages to learn and I’ve had a lot of speeches to give, but I put so much pressure on myself with this one. Any actor will tell you the days on set are long and then you go home and do your homework, which is learning your lines for the next day. This is learning a fake language on top of that! It almost killed me. I normally pick up these things quite quickly, but this speech meant so much to me. I was so worried that I was going to f— it up. I stayed up so late every night for like two months. I said it to my cooker, I said it to my fridge. I said it to all of Belfast out my window! Well, the window was closed because I didn’t want people to think I was actually barking mad.

If you can do an action like going shopping or tidying a room while saying your lines, that means you’ve learned them. So we’re coming up to the night of filming. And the morning of, I had gotten no sleep whatsoever because I’d been up all night tearfully thinking “I can’t do this. I can’t get through it without messing up my lines.” I knew that this was one of the most solidifying, integral moments for Daenerys as a character.

I gave the speech just to a green screen. There was no one there, just a camera and green and an empty room. But the crew, rightly so, will be like “Oh God, lady speaking a fake language.” So there’s a kind of disconnect there. I knew I had to be completely and utterly prepared to make an utter fool of myself. All of that happened and I had my dialect coach literally within spitting distance because I was convinced I was going to mess it up. Then the weirdest thing happened — I walked onset, didn’t need a rehearsal, and I got through the whole thing perfect on the first go. The rest of the day it was like Daenerys was just with me. That’s the only time I got through that speech without getting anything wrong, when it was on camera. If you had asked me to do it the next day, I’d already forgotten it.

In giving all these speeches in fake languages, I watched a lot of videos of — now it seems funny — dictators and powerful leaders speaking a different language to see if I could understand what they were saying without knowing the language. And you can! You absolutely can understand what Hitler’s f—ing saying, these single-focus orators speaking a foreign language. So I thought, “If I can believe every single word I’m saying, the audience won’t need to be looking at the subtitles too much.”

This final season has been very divisive. What do you think the legacy of the show will ultimately be?

I think it is what it always has been, which is a discussion of power and what it does to a single human being, a group of human beings, and the people they are meant to be serving. I think that is as true on the first episode of the first season as it is on the final episode of the series. It’s like catching sunlight. How can you possibly understand what power is and how it universally affects individuals? And then there’s each individual’s attempts to grapple with it and use it for the good of a group of people, whatever that is. I think that is essentially a discussion on humans and how we can live together in a world that is ruled by the politics of individuals. That question is asked in the final episode and I don’t think it’s answered because it shouldn’t be answered. We can’t. There is no answer. We’re just trying to do it all the time. Where I think we got with the show is as good an answer as there could be.