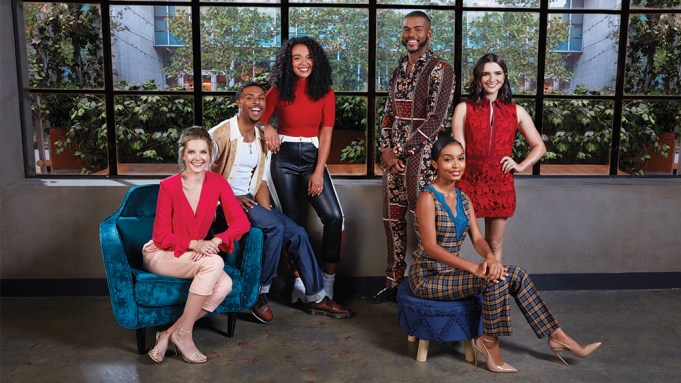 Wendy Straker Hauser has found her fountain of youth. As the showrunner for the Freeform friendship drama “The Bold Type,” Hauser gets to tell the story of three young women tackling love and life in the Big Apple’s wild and wonderful world of magazine journalism. The show, which stars Katie Stevens, Aisha Dee and Meghann Fahy, is entering its fourth season.

“There was something about ‘The Bold Type’ that felt so personal to me,” says Hauser, who jumped on the series as a writer in between seasons of “The Handmaid’s Tale.” Now she helms “The Bold Type.”

“I grew up in New York and I worked in magazines and it felt like my 20s,” she says. “I’ve been able to go back and relive this really important time in my life when everything felt really raw and significant and scary. When friendships are your family. And I just love living in it and I love the voices of my characters. No matter how old we get, we still feel like we’re in our 20s.”

Freeform thrives on Hauser’s sentiment. The cable network, formerly known as ABC Family, does an impressive job of connecting with its 20- to 26-year-old target audience through authentic and inclusive storytelling. Variety is honoring Freeform for the strides it has made in this programming at its annual Power of Young Hollywood event.

Network bosses had their eye on this young-adult audience when they rebranded ABC Family to Freeform nearly four years ago. At the time, its most popular show, “Pretty Little Liars,” was coming to the end of its run.

“ABC Family was a top 10 cable network with a leadership position with young adults,” says Freeform president Tom Ascheim. “And yet, there was no connection to our old brand. We were not actually part of ABC and ‘family’ traditionally focuses stories on families with kids. As we were changing the name of our network, our most popular show — ‘Pretty Little Liars’ — was entering its sixth and seventh season. So our audience, which had started watching ‘PLL’ when they were in high school, were now in their 20s.

“As they grew, we wanted to grow with them. We needed to show up with more sophisticated and bolder stories that suited people who were now focused more on making their way in the world versus which seat to find in the cafeteria,” Ascheim says. “That more sophisticated lens has colored all the choices we’ve made in programming and marketing and has let us completely rebuild our programming line-up.”

“As a network, it creates more interesting content,” says Yara Shahidi, the star of “Black-ish” spinoff “Grown-ish” and one of its producers. “Our on-screen cast is diverse. But what we’re able to do behind the scenes in terms of the directors that we have, in terms of the writers that we have, the showrunners, I think it’s all really a beautiful space because you see inclusivity on every level. That’s what influences the authenticity you see in front of the camera because these are our actual stories that we’re telling.”

“I was in a singing group when I was younger and we definitely had those moments where we had a lack of diversity behind the scenes and our hair and makeup ended up looking crazy,” Henry says. “It’s crucial. We want to make sure that we are being honest. We’ll do all kinds of things, like every once and a while, we’ll throw a wave cap on Zoey [Shahidi’s character].

“When we as black women go to sleep, we put on bonnets or wave caps so that our hair is up against something silk to prevent breakage and keep things neat,” she says. “It’s super fun and honestly, hair and wardrobe have become their own characters within the scope of the show.”

“As they grew, we wanted to grow with them.”
Tom Ascheim

The writers’ room also plays a part. On “The Bold Type,” Kat (performed by Dee) is bisexual and on “Good Trouble,” a series about young adults living in Los Angeles after college, transgender actress Hailie Sahar stars as Jazmin.

To make sure the stories ring true, “The Bold Type” has bisexual writers and “Good Trouble” has transgender writers. “The Bold Type” took on white privilege and when tackling social activism on “Good Trouble,” showrunner Joanna Johnson brought in Black Lives Matter co-founder Patrisse Cullors as a consultant. Now, she’s one of the drama’s writers. Over on “Grown-ish,” if the slang is stale, the young and au courant cast will improve and change it. And viewers can feel the difference.

“A girl from Kenya, literally the other day, reached out and said her family doesn’t accept her because of her sexuality but she finds strength in our show,” Dee says of “The Bold Type.” “Seeing that is such a trip because that is what TV and movies did for me as a kid in Australia. I was the only black girl in my school and one of the only people of color in my town. Period.”

Back then, Dee recalls, kids would ask derogatory questions about her skin and hair. “I would turn on the TV and be like, ‘You know what? Jackie Brown has it going on. They don’t know,’” she says. “It’s special to me and it’s so cool to be a part of this new phase where we’re actually telling real stories and reflecting the real world. Social media and TV have made the world so much smaller and I love Freeform for actively striving to tell everyone’s story as much as it can.”