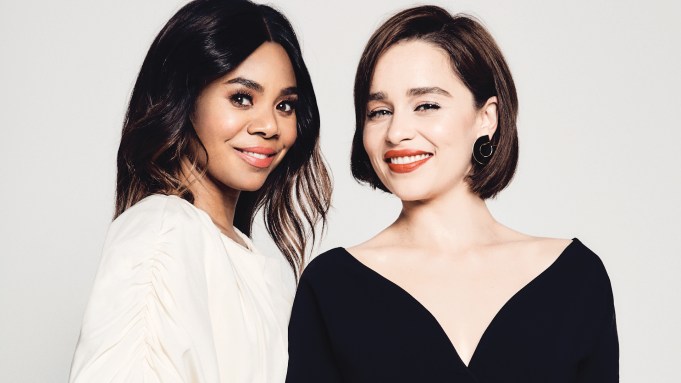 Emilia Clarke and Regina Hall sat down for a chat for Variety’s Actors on Actors. For more, click here.

Emilia Clarke and Regina Hall spent the TV season playing characters who break through the boys’ club. Clarke, on HBO’s “Game of Thrones,” was Daenerys, the dragon queen whose will to power has brought her on an eight-season journey to the heart of the action in Westeros. Hall, a TV veteran, infiltrates a different center of power on Showtime’s comedy “Black Monday,” as the lone woman in a 1980s Wall Street firm.

Regina Hall: It’s so good to meet you. Because I’m a rare person who, prior to this, had not seen “Game of Thrones.”

Emilia Clarke: Not a rare person at all.

EC: OK. Not rare amongst mine.

RH: Tell your friends they’re missing out. How did you feel about that being the first role that you tackled?

EC: I was just so happy to be employed. It was my first job. I knew that being in an HBO show was amazing, but more than anything, I knew that having a regular paycheck that wasn’t from waiting tables was also amazing.

EC: Yeah. You learn life skills there. I feel empowered with female life skills. It’s only the last few seasons of the show where I’ve allowed myself to indulge, ever so slightly, in “Oh, you got really lucky.” As opposed to “Don’t mess it up.” Now I’m able to fully love the textures and the feeling of playing Daenerys.

RH: The first thing I start with is the hair. Everybody has different points of entry. Eighties fashion is quite interesting, but I gained 10 pounds. Nothing really has to fit. It’s all sort of boxy.

EC: Being around such a male-dominated world, did it change how you carried yourself?

RH: Now we’re in a different movement, but I felt like — I always feel like — Dawn uses her femininity and her breasts.

EC: And that’s armor too.

RH: You are literally in armor.

EC: Michele Clapton, who designs the costumes, is an absolute living god. I will never look as good. But it’s all corsets. It’s all sewn in. She doesn’t believe in zips. Which is great. It’s just not great when you’re like, I need to wrap. You’ll see me with the scissors trying to cut out of it, being like, “I’m done. I’m so tired.”

RH: I love the hair.

EC: In the last season, it was five people’s worth of hair. There’s a couple of scenes where in between each take, I can’t even hold my head up.

RH: It’s crazy because all those details matter.

EC: Completely. I love doing a lot of research. That’s one of my favorite things. Obviously, “Game of Thrones,” the research was just read the books. For you, this is a real moment in time.

RH: I love to do research too. I met one black woman who was a trader back in the ’80s. She was the only one! They really are that rowdy and scandalous. I liked that.

EC: Was there a moment in your life when you enjoyed a good time?

RH: Never to that degree.

EC: No. I literally started “Game of Thrones,” and that was pretty much it. I missed out on all of it because the show happened throughout all of my 20s, which is when you should be wild.

RH: Yeah, that is when you should do it.

EC: And then I had a couple of brain hemorrhages, so that kind of got in the way of a few things.

RH:  I read that and loved you even more. Did that change you in any way? Change your process? Change how you are as an actress, as a woman?

EC: I always say that Daenerys literally saved my life, because it puts you in quite the headspace when you’ve had a brain injury. Walking in her shoes, I just put so much more into each season because it really was life or death. I felt so powerfully that she was saving me. I could only see her. That was my single point of focus that allowed me to not think about anything scarier than just getting on set.

RH: Then it ended up being a gift to us. We get to see all that go into her. How do you feel leaving that world behind? Leaving your dragons behind? Did you take anything from set?

EC: I didn’t take anything, and I deeply regret it, and I’m very annoyed. I’m really hoping that the showrunners give me a dragon. I need my smelly socks. I think I did take those.

Having it come to its completion feels utterly surreal. So much life has happened in the 10 years that I’ve been on the show. I’ve grown into a woman. I was 23. It’s been almost a year in post, and it’s taken me that long to come to terms with it. Where are my dragons? That famous line. Where the hell are they? It felt deeply emotional.

EC: It is very much a family. You saw for the first time everyone’s truthful fragility coming through as it ended. You’re putting on all this thing like it’s fine, it’s fine. When it did finally end, it broke everyone.

It’s a perfect time for us to leave because, in the beginning, TV wasn’t what it is now. Now it is, and I feel that finishing this show here is literally like, let everyone create this — more intricate storytelling and spectacles on television. You’ve been on great television from the beginning until now. Now you’re doing television in a world that’s incredibly different from when you did “Ally McBeal.”

EC: Was “Scary Movie” the first?

RH: No, actually my father passed away my first year in journalism school. You know when things happen in life and you are faced with the brevity of life in a way that you didn’t think about before? I decided I would just pursue it. Once I was in New York, everything was different. I met people that actually did it for a living. My first job was this movie called “The Best Man.” I played a stripper. But my first comedy was “Scary Movie.” We did four of those, and I was always a little scared because I was like, is this going to be the only thing?

EC: What was the journey that you had to take to say, “Hey guys, I know I’m ridiculously funny and completely gorgeous, but I also would like to do something serious.”

RH: “Scary Movie” was a broad comedy. It wasn’t easy for me to get comedies then. It was not a romantic comedy, and those comedies — I always felt like the men had the good jokes and then they had a pretty ingénue girlfriend. So I didn’t quite fit into that either. It’s always been a fight. Eventually I just had to go in over and over and audition until they were like, “I didn’t see this.” Slowly but surely, people were like, “There you are.”

“It’s always been a fight. eventually i just had to go in over and over and audition untilthey were like, ‘i didn’t see this.’ slowly but surely, people were like, ‘there you are.’”
Regina Hall

EC: Let’s talk about fans, because you’ve got many.

RH: It’s important. They make you want to do your best. They grow up with you. Do you feel that?

EC: Yeah, I really do. Having my first experience be something that does already have such an in-built fan base, with the books — I was like, I can’t mess that up. I didn’t want to upset the fans.

RH: Yes. They do get upset. You haven’t had stalkers, have you? Not to be dark.

EC: Yeah. Nothing too bonkers.

RH: Do they think you were their queen?

EC: I would love it if someone just rode up on a horse and was like, “My queen, hop on board!” I get silent stalkers. In London, what you have is you walk past someone and very politely, you’ll hear, “Is that …?” And they’ll carry on.

RH: Sometimes people will say, “What have you been in?” Oh, God. I’m not going to list my résumé. Sometimes they will say, “Miss [Regina] King, can I have a picture?” Then I say, “Wrong name! No picture!” Then they feel horrible. I feel horrible that they feel embarrassed. But it’s a lesson.

EC: They should know.

EC: Exactly. But I also get “Are you my cousin’s sister?”

RH: They do that. They think you went to high school together. Then you say, “I’m an actress.” And they say, “In what?” That’s hard.